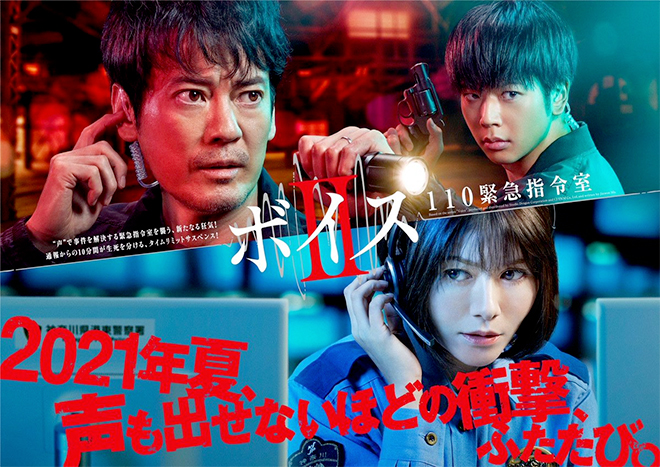 Story
The Emergency Call Unit under Koto Police Precinct’s Emergency Command Centre is a unit that specialises in responding within 10 minutes. Once an emergency call to 110 is received, the time starts counting down. The police have get to the scene within three minutes, grasp the situation within five, and arrest the suspect in the next 10 minutes. This determines whether the victim lives or dies. The head of the Emergency Call Unit, Tachibana Hikari, and leader of the unit’s emergency response team, Shigefuji Yuji, head to the scene of a hostage-taking incident. A man with a bomb strapped around him, raises his voice at a pregnant woman whom he is holding hostage. Listening to the man’s voice, Hikari is immediately able to decipher the man’s traits and works with the members of the unit to determine his identity and motive. She has a special listening ability and can distinguish even the slightest sounds which ordinary people cannot hear. Meanwhile, former detective Higuchi Shogo, who has left the frontline because of his son Daiki, sees a woman being attacked as he makes his way back from visiting his wife’s grave. He rescues her and chases after the criminal. However, the man bolts through a pre-planned escape route and escapes with an accomplice after abducting Daiki. Three days later, Daiki is released but the pain inflicted on the boy enrages Higuchi who decides to return to lead the emergency response team. Hikari and Higuchi resume working together to save victims and catch criminals as quickly as possible. This time, they face a “dark hero” who more than just a villain. The person is a fascinating evil incarnation that seems to represent the melancholy and impotent anger which some of the youth have against society, and give vent to their anguish and pent-up rage.

Characters
Maki Yoko as Tachibana Hikari
The head of Koto Police Precinct’s Emergency Call Unit. A voice profiler who can hear the “voices” of the people calling for help. Her sight was affected due to an accident in her early childhood. But at the same time, she developed the ability to hear even faint sounds. She worked at the Emergency Command Centre after graduating at the top of her class from the police academy. However, Higuchi Shogo’s wife whose emergency call she received was brutally killed. In addition, her own father, a patrol officer who was doing his rounds in the vicinity ended up bludgeoned to death by the same man. Feeling despair and regret, she eventually became a voice profiler. Two years ago, she set up the Emergency Call Unit. She appointed Higuchi to be the leader of the emergency response team and successfully arrested the serial killer Hongo Shizuku. She is currently dating Shigefuji Yuji who replaced Higuchi as the team leader.

Karasawa Toshiaki as Higuchi Shogo
The leader of the Emergency Call Unit’s emergency response team. A remarkable detective who is passionate and at times lets his emotions get the better of him. A compassionate, old-fashioned man trusted by his juniors. Ever since his wife Miki was murdered by an unknown person, he led the life of a degenerate. But two years ago, he was appointed to be the team leader of the newly established Emergency Call Unit. Together with Tachibana Hikari, he found out the identity of the serial killer Hongo Shizuku who killed Miki and Hikari’s father. After Hongo’s arrest, he left the frontline because his son Daiki was sick and needed treatment. He returns to Yokohama when Daiki’s treatment is completed but gets entangled in a new case … …

Masuda Takahisa as Ishikawa Toru
An investigator with Koto Police Precinct’s Emergency Call Unit. He used to belong to the Violent Crimes Section and still calls Higuchi Shogo, who was the head of the section at the time, “brother” and greatly admires him. Two years ago, he became the Emergency Call Unit’s investigator along with Higuchi but he was manipulated by a serial killer and ended up betraying Higuchi. After the incident, he decided to resign as a police officer. However, he was dissuaded by Tachibana Hikari and started working at the precinct’s Community Safety Division. Following Higuchi’s return to the Emergency Call Unit, he goes back to investigating cases with him again.

Fujimoto Takahiro as Shigefuji Michitaka
The head of the First Investigations Division and older brother of Shigefuji Yuji, the leader of the emergency response team. Higuchi Shogo’s peer. He does not trust the Emergency Call Unit which has developed rapidly, and is unhappy that Yuji has become its team leader and Higuchi acts on his own.

This blog contains information and musings on current and upcoming Japanese dramas but is not intended to be comprehensive.
View all posts by jadefrost →
This entry was posted in NTV, Summer 2021 Dramas and tagged Karasawa Toshiaki, Maki Yoko, Voice Series. Bookmark the permalink.