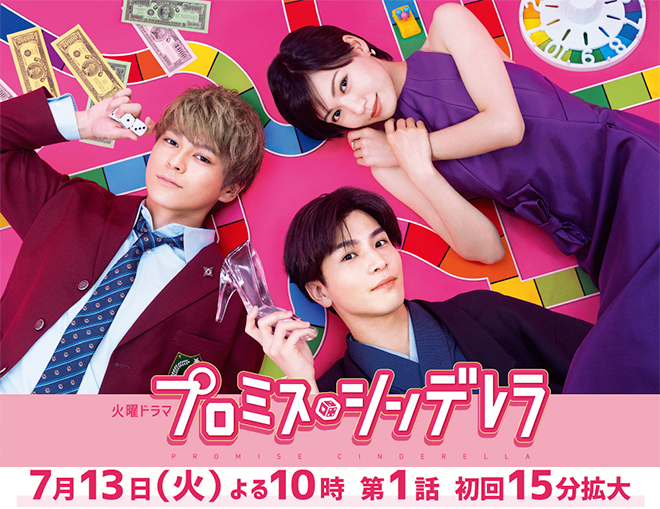 Story
Katsuragi Hayame, an ordinary housewife around 30, has barely been married for a year when her happy and peaceful life is shattered one day. She is suddenly told by her husband Masahiro that he wants a divorce because he has another woman. Reeling from this news, Hayame runs away from home. But all her money is stolen by a pickpocket and she finds herself homeless. After sleeping out in a park for several days, she encounters a handsome and rich male high school student Kataoka Issei. Issei is actually the younger brother of Hayame’s first love Seigo, who has become the fifth-generation owner of the high-end traditional Japanese inn Kataoka. In contrast to Seigo, Issei’s personality and behaviour is extremely bad. Taking an interest in her perilous circumstances, he offers to give her a place to sleep if she agrees to take part in a “real-life games” and relieve his boredom. It involves rolling the dice and clearing a mission to get prize money. Hayame has an aversion to relying on people but she stays at the mansion. Even though she is offended by the distasteful games such as humiliating the main character at a party for the wealthy to earn 200,000 yen, she is forced to participate in order to repay debt that she has been saddled with. As she lives with the Kataokas, Hayame is introduced to a world of excitement, thrills, and romance that she never could have imagined.

Characters
Nikaido Fumi as Katsuragi Hayame
She leaves home after her husband Masahiro suddenly broaches the topic of divorce. However, an encounter with a pickpocket leaves her penniless and she ends up living like a homeless person. She hates dishonesty and has a straightforward nature but is also uncomfortable relying on other people.

Maeda Gordon as Kataoka Issei
The second son of the Kataokas. The good thing about being from a rich family is that he can live it up with his friends. He has a horrible personality and feels very inferior to his capable older brother Seigo, who can do anything.

Iwata Takanori as Kataoka Seigo
The eldest son of the Kataokas and the fifth-generation owner of the family’s traditional Japanese inn Kataoka. He has always attracted attention for his good looks and grades. However, he feels great responsibility for the long-established inn and secretly worries about his restrictive life and that there is no one he can trust. He is concerned about his younger brother Issei who lives as he likes, and is stern with him.

Inowaki Kai as Katsuragi Masahiro
Katsuragi Hayame’s husband. A kind and good-natured guy who will feel compelled to extend a helping hand to people who are in difficulty. He fell in love with Hayame at first sight and they wedded after he wooed her. However, he started having an affair with another woman not long after he got married and tells Hayame that he wants a divorce.

Matsui Rena as Kikuno
A popular geisha who visits the traditional Japanese inn Kataoka regularly. A mysterious and beautiful woman who seems to have a deep relationship with Kataoka Seigo. She is very jealous of Katsuragi Hayame and keeps scheming to make Hayame hit rock bottom.

This blog contains information and musings on current and upcoming Japanese dramas but is not intended to be comprehensive.
View all posts by jadefrost →
This entry was posted in Summer 2021 Dramas, TBS/MBS and tagged Nikaido Fumi, Promise Cinderella. Bookmark the permalink.