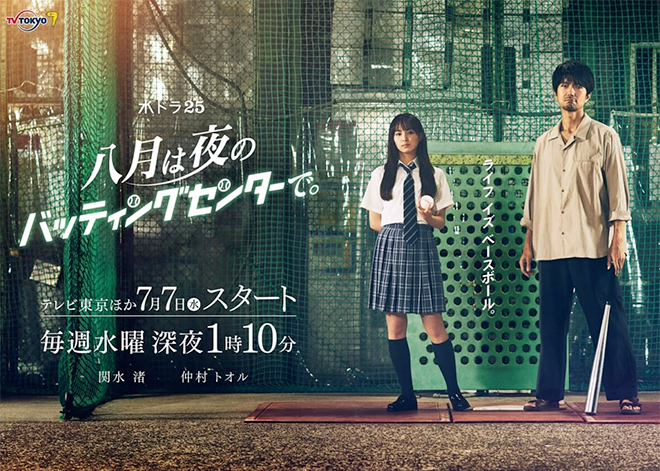 Story
17-year old high school girl Natsuha Mai is on summer break and has for some reason begun working part-time at Natsuha Batting Centre that her uncle runs. Troubled female customers come here at night. One day, Natsuha encounters a mysterious man Ito Tomohiro who seems to know people’s problems and struggles by watching them hit balls in the batter box every night. He says he can tell what problems they have as he observes their swings. He tries to guide them in solving their worries through his unique view of life which he likens to baseball baseball theory. Ito sees Sakamoto Yuriko’s swing when she comes to the batting centre and identifies that she is worrying about work-related matters. In fact, Yuriko gets pushed about by a colleague who joined the company at the same time that she did and does not feel valued by the people around her even though she covers for them. Ito tries to help tackle her problem. Then there is Amano Kanae who works for an advertising agency and gets many invitations from men but ignores all of them. She enters the batter box while Natsuha and Ito are watching but she makes a complaint about missing everything even though she had strikes. Growing impatient with Kanae who has just run off, Ito points out a critical flaw.

This blog contains information and musings on current and upcoming Japanese dramas but is not intended to be comprehensive.
View all posts by jadefrost →
This entry was posted in Summer 2021 Dramas, TV Tokyo and tagged Hachigatsu wa Yoru no Batting Centre de, Itaya Yuka, Kinami Haruka. Bookmark the permalink.