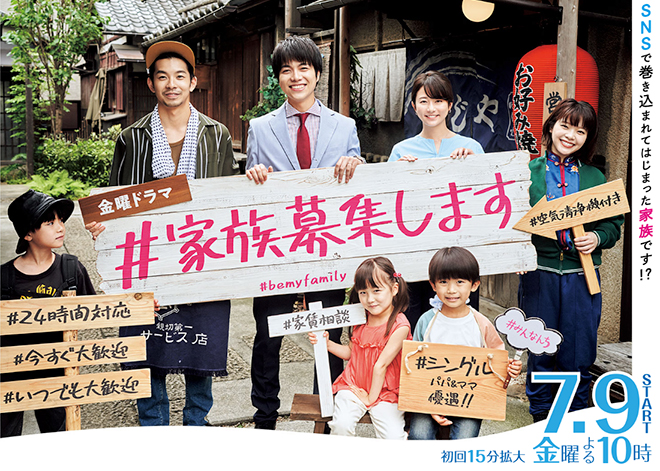 Story
Akagi Shunpei just became a single father three months ago due to some circumstances. He works at a small publishing company called Eggplant, which puts out children’s books, while struggling to bring up his 5-year-old son Haru. One day, Shunpei happens to meet his childhood friend Osanai Sosuke again. Learning about Shunpei’s troubles as a solo parent, Sosuke makes an offbeat suggestion to recruit a family through social media to live together and share in child raising. Sosuke had been thinking about earning rental income in order to rebuild Nijiya, the old okonomiyaki shop where he works, by turning the empty second floor into a communal living space. Shunpei is astounded and does not believe anyone will respond to this invitation. But when Sosuke puts out a call on social media for single parents like Shunpei, his hashtag #bemyfamily attracts attention. That night, he receives his first phone call. It is from Momota Rei, an elementary school teacher who is a single mother with a 5-year-old daughter Shizuku. In addition, a singer-songwriter Yokose Meiku who has a 6-year-old son Daichi also gets in touch. They move in together. But can two men, two women, and three children really become a family just by living under the same roof?

Characters
Shigeoka Daiki as Akagi Shunpei
An employee of Eggplant, a small publisher of picture books. He is raising his 5-year-old son Haru on his own. Three months ago, his wife Midori passed away and he became a single parent. Vowing to smile in front of Haru, he strives to bring up his son. However due to his strong sense of righteousness and deep love for the children, he carries the pain and helplessness alone. He happens to meet his childhood friend Osanai Sosuke again one day and gets entangled in Sosuke’s offbeat social media post with the hashtag #bemyfamily. He starts a strange communal life under the same roof.

Kimura Fumino as Momota Rei
An elementary school teacher who is a single mother with a 5-year-old daughter Shizuku. She has a strong desire not to use the fact that she is a single parent to rely on her parents or anyone, and bring her child up right on her own. Because of her job, she faces the dilemma of spending more time with the children in class rather than Shizuku. However, she tells herself that the quality of time spent with Shizuku is more important than the length of time as she struggles with work and raising her child.

Nakano Taiga as Osanai Sosuke
A live-in employee of an okonomiyaki shop called Nijiya and the person behind the social media post with the hashtag #bemyfamily. Akagi Shunpei’s friend from school days. He is like a meddlesome but caring older brother. His ability to take the initiative is both a strength and a weakness since he must leap into action immediately once an idea comes to mind. He struggles to lend an ear and give a helping hand to Shunpei and everyone but it is often misplaced kindness. He is the type who complicates and throws things into confusion.

Kishii Yukino as Yokose Meiku
An aspiring singer-songwriter who is a single mother with a 6-year-old son Daichi. She moves from one part-time job to another while continuing to play music which is her dream. She does things in her own way and is the type who overstates matters. She proclaims herself to be someone with a can-do attitude, she simply does not do some things as they are extremely troublesome. As a result of her free-spirited personality she often has conflicts with Momota Rei and Osanai Sosuke.

Yamamoto Mizuki as Akagi Midori
Akagi Shunpei’s late wife. She was a writer of picture books. After her first picture book was published, she was killed in a freak accident while she was in Europe to do a story.

Ishibashi Renji as Noda Ginji
The owner of the old okonomiyaki shop Nijiya which also serves as a residence. At Osanai Sosuke’s request, he provides the empty second floor as the place for Sosuke’s offbeat #bemyfamily invitation. He is caring but does not talk much and quietly watches over everyone.

This blog contains information and musings on current and upcoming Japanese dramas but is not intended to be comprehensive.
View all posts by jadefrost →
This entry was posted in Summer 2021 Dramas, TBS/MBS and tagged #Kazoku Boshuu Shimasu, Kimura Fumino. Bookmark the permalink.