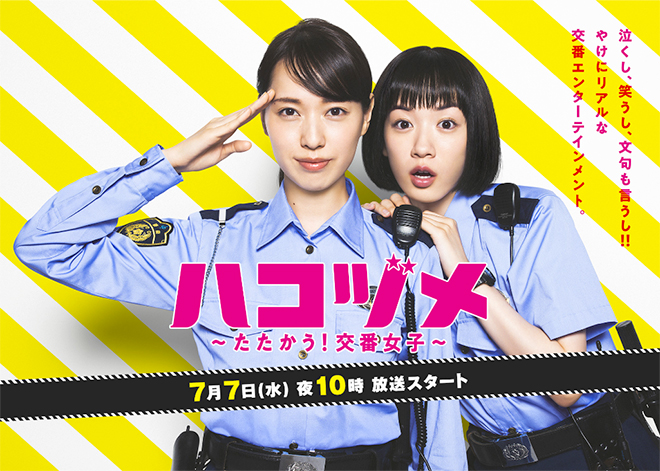 Story
“If you become a police officer, you will be safe for the rest of your life.” This simplistic idea spurred 20-year-old newcomer Kawai Mai to become a police officer. Assigned to work at a police box for two weeks, she feels both physically and mentally drained by the hard work. She has never felt appreciated even though she supposedly works for the sake of the area’s residents. Mai prepares her resignation letter and is on the brink of turning it in to her boss Igasaki Shuichi when she is told that she would be paired with 30-year-old Fuji Seiko. The former ace detective of the Criminal Investigations Division, Seiko is said to have been forced to transfer to the police box for bullying a subordinate at work. Mai misses her chance to submit her resignation. Seiko immediately demonstrates her abilities while they are on patrol and deftly catches a suspicious man due to something she notice. Meanwhile, the Criminal Affairs Division’s First Investigation Section led by Hojo Tamotsu are in hot pursuit of a serial thief called Shinohara. However, they are contacted by the police box and informed that the man Seiko caught is Shinohara, the man they are after. This encounter between Mai and Seiko significantly changes their lives as they are suddenly paired up. Assigned as buddies out of the blue, this odd pair struggle to help and support each other as they pour heart and soul into their cases, routine duties and romance?! And Seiko’s true reason for coming to the police box is revealed.

Characters
Toda Erika as Fuji Seiko
She was an ace detective in the Criminal Affairs Division. But one day she was transferred to the Community Affairs Division and ended up working at a police box in Machiyama. She is paired with the rookie Kawai Mai and coaches her. A highly effective police officer, she graduated top of the class at the police academy. She is candid and clearly express what she thinks. Because she actually cannot stand being alone, she hangs around Kawai Mai’s room which is next to hers at the dorm. In contrast to her excellence at work, she does not understand a man’s heart and is terrible at romance. There is a reason for her transfer to the police box … …

Nagano Mei as Kawai Mai
A police officer with the Community Affairs Division. She was assigned to the Machiyama police box as a newcomer. She is very naive and quite an airhead even though she is not aware of it. Even when she talks to people who are senior to her, she does not read the situation and bluntly states her opinion. She is not good at cooking and knows little about fashion. She has been studying about romance through manga for girls, but has never had the opportunity to make use of it. Although she became a police officer because she was drawn to the steady income, she does not find work at the police box rewarding and had been thinking about quitting when she meets Fuji Seiko.

Miura Shohei as Minamoto Seiji
A detective with the First Investigation Section and the best interrogator in the precinct. His partner is Yamada Takeshi. He and Fuji Seiko were in the same year at the police academy, but unlike her, he was at the bottom of the class. He is widely loved by the locals because he is naturally slick. He hates to lose and acts immediately once he sets his mind on doing something. This frequently causes problems which even anger the higher-ups. He is the only one who calls Fuji Seiko as “Seiko-chan” and treats her in a seemingly friendly manner. But they do not see eye to eye as police officers, and constantly often trade sarcastic barbs and quarrel. However, he is actually the one who backs her up and supports her more than anyone else.

Yamada Yuki as Yamada Takeshi
A detective with the First Investigation Section. His partner is Minamoto Seiji. A junior of Fuji Seiko and Seiji at the police academy. He was trained hard by the two of them since their police academy days and is still being used for their own benefit to this day. He has a strong sense of justice and sometimes ends up doing things that are uncalled for in a fit of anger. But he is actually a serious and hard-working guy. He only has confidence in his physical strength and secretly feels inferior to his two seniors – Seiko who can do anything and Seiji who is a gifted interrogator. He constantly mediates between them. He is also quick witted in getting them to cooperate and solve cases at the critical moment. He plays the role of facilitator for these two seniors.

Muro Tsuyoshi as Igasaki Shuichi
The head of Machiyama police box. Fuji Seiko and Kawai Mai’s direct boss. He is called Hakochou by his subordinates. He always loafs on the job and seems to be just an average nice middle-aged man who thinks that working comfortably is the first priority. But when Seiko is troubled or Mai fails, he nonchalantly supports them. In fact, he thinks and watches over the two of them more than anyone else. He has committed all the police box’s unsolved cases to memory in order to “get the job done safely at the minimum”.

This blog contains information and musings on current and upcoming Japanese dramas but is not intended to be comprehensive.
View all posts by jadefrost →
This entry was posted in NTV, Summer 2021 Dramas and tagged Hakozume Tatakau! Kouban Joshi, Muro Tsuyoshi, Toda Erika. Bookmark the permalink.