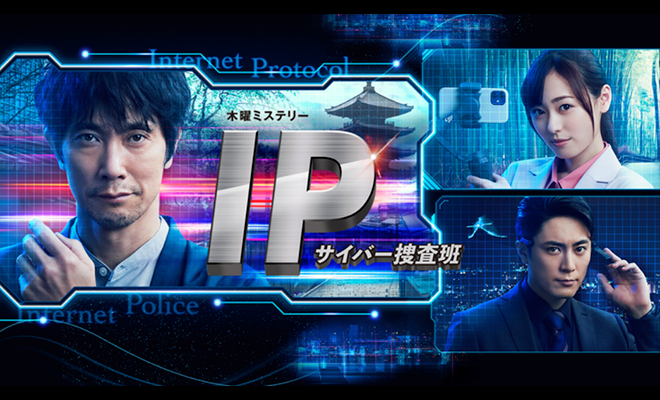 Story
The Kyoto Prefectural Police’s Cyber Crime Unit is groundbreaking team led by Hiratsuka Eitaro. They primarily support investigations with the most advanced equipment and skills such as web analysis and profiling, and have been granted the power to conduct investigations at the scene and make arrests. Despite being set up with much fanfare and bringing together outstanding experts, all the Cyber Crime Unit gets are troublesome tasks such as doing background work on cyber crimes and cleaning up. Although the team which includes Yasumiya Issei, Tawada Shohei, Komiyama Kizuna, Kawase Nanami and Okabayashi Takuya has investigative authority, they are resigned to playing a support role in the prefectural police’s chain of command. Unfortunately they are mocked as “cleaning crew” in a pun on their name. One day, Tawada and Kizuna find a dead man bleeding from the back of his head in a disused factory, which is the hideout of a group behind phishing scams. He is soon identified as Ishimoto Takeaki, a former detective who was given a dishonourable discharge five years ago. He had joined the scammers due to a grudge against the police and it is believed that he was killed after a falling out with the group. However, a USB drive is found in his stomach during an autopsy of the body. It appears that he was forced to swallow it while he was near death. Yasumiya sees through the criminals’ aim of social hacking by using the USB drive to set up a virus. But at that moment, the virus is activated. It triggers an emergency situation by knocking out all the network functions in the Kyoto Prefectural Police’s headquarters! Furthermore, a second murder unexpectedly takes place.

Characters
Sasaki Kuranosuke as Yasumiya Issei
A senior detective with the Kyoto Prefectural Police’s Cyber Crime Unit. Even though he has investigative authority, he stays entirely indoors and does office work. While he is the lead detective, he normally does not exercise leadership. He has a vast and up-to-date knowledge of cyber crime, and his skills in investigation and deduction are outstanding. However, he has absolutely no interest in the behind-the-scenes maneuvering and factions within the organisation. He will not even follow unspoken orders from higher-ups. As a result, he was labelled “uncontrollable” and sent to the “cleaning” unit. He is an exceptionally digital person and takes great pleasure in handling tasks that he has been given with the routine and protocol he has established without wasting one bit of time. On the other hand, he will not even move a finger if he is not even a bit interested in the matter. He has no interest in people’s feelings and criminals’ motives but there are signs of change after he meets Komiyama Kizuna … …

Mamiya Shotaro as Tawada Shohei
A detective with the Kyoto Prefectural Police’s Cyber Crime Unit. His happiness after he was assigned to the First Investigation Division was short-lived and he was sent to the newly established “cleaning” unit. As Yasumiya Issei is the type who stays at home all the time and does not move from the computer, he is always forced to do all the outdoor work. In fact, some person has given him a secret order regarding Yasumiya. He usually works with a nonchalant look as one of the team’s members. But there are times when he seems to be providing information to some person. He soon realises that Yasumiya and Komiyama Kizuna may be father and daughter.

Sugimoto Tetta as Hiratsuka Eitaro
The head of the Kyoto Prefectural Police’s Cyber Crime Unit. He is in charge of profiling. He may look like a plain middle-aged man but he has good knowledge and skills including predicting crimes and profiling which the country is still not equipped with. He has had to do a lot of office work thus far which is a waste of his talent. But the number of cases they have to handle has increased after Komiyama Kizuna came to the unit and his abilities are being reassessed.

Fukuhara Haruka as Komiyama Kizuna
A rookie detective with the Kyoto Prefectural Police’s Cyber Crime Unit. She did well in detective training and even though she could have been assigned to any department that she wanted, she somehow chose the unit which has the worst history in the Kyoto Prefectural Police. That is because her father may be Yasumiya Issei. In fact, her mother, who had passed away when she was very young, appears to have dated him. She had wanted to confirm whether he is truly her father. But she is quickly taken aback by his eccentricity. She is hardworking, has good intuition and also does not have the “futile eagerness” that is unique to newbies. However, she is very earnest and will plunge straight on in one direction without turning back once she makes up her mind. She is grateful to her aunt and husband for bringing her up as their own child after her mother passed away and always tries not to forget to feel gratitude for people’s kindness.

Takahata Atsuko as Natsumi Rika
A coroner at the Kyoto Chuo University’s faculty of medicine. She has been commissioned by the Kyoto Prefectural Police to perform autopsies on people deemed to have died suspiciously. She has known Yasumiya Issei for close to 30 years since his graduate student days. As she is like Yasumiya, she is a rare person who is able to have conversations with the same scientific sensibilities. She also seems to know about Komiyama Kizuna’s mother … …

This blog contains information and musings on current and upcoming Japanese dramas but is not intended to be comprehensive.
View all posts by jadefrost →
This entry was posted in Summer 2021 Dramas, TV Asahi and tagged IP, Mamiya Shotaro, Sasaki Kuranosuke, Sugimoto Tetta, Takahata Atsuko. Bookmark the permalink.