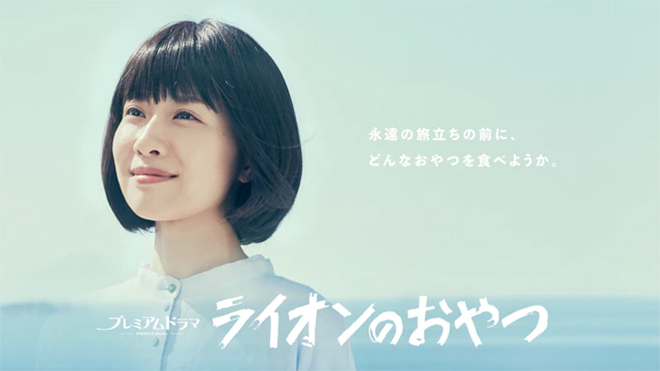 Story
Lion’s House is the name of a hospice on a beautiful island. This is where people who do not have long to live come to spend the final days of their life. 29-year-old Umino Shizuku arrives at Lion’s House with no intention to return to Tokyo after deciding to spend her remaining days here. She has a complicated family situation and feels a little regretful that she came here without improving the strained relationship with her family. The hospice is run by an amazing woman called Madonna. At Lion’s House, there is tea time where residents can request snacks that they remember. However, Shizuku is unable to decide which snack she wants. She wishes to eat, live and travel. Such commonplace things are so precious. Shizuku’s days are filled with laughter, conflict and tears with Madonna and fellow residents. She also spends a bittersweet time with Tahiti, a young man on the island who has devoted himself to farming. These encounters and friendships remind her about what is important. What will she find and leave behind during these special last moments of her life?

Characters
Tsuchimura Kaho as Umino Shizuku
She had been undergoing treatment for her illness. But after she learns that she does not have long to live, she moves into Lion’s House without her family’s knowledge. Unexpected events at the hospice enrich her daily life.

Ryusei Ryo as Tahiti
A young man who is cultivating a species of angelica on the island and has been dreaming about the plant’s potential. Although his circumstances are different from Umino Shizuku’s, he becomes an important person to her.

Wada Masato as Awatorisu Tomohiko
A resident of Lion’s House who is always cheerful and tells jokes.

Ishimaru Kanji as Sakaguchi Hiroto
The younger brother of Umino Shizuku’s father. He raised Shizuku after her parents passed away and showered her with a lot of love. He plays the cello.

Nishida Naomi as Sakaguchi Sanae
Sakaguchi Hiroto’s wife. She has a delicate and frosty relationship with Umino Shizuku.

Suzuki Kyoka as Madonna
The manager of Lion’s House who is there for each resident’s last days and watches over every incident that happens at the hospice.

This blog contains information and musings on current and upcoming Japanese dramas but is not intended to be comprehensive.
View all posts by jadefrost →
This entry was posted in NHK, Summer 2021 Dramas and tagged Lion no Oyatsu, Suzuki Kyoka. Bookmark the permalink.