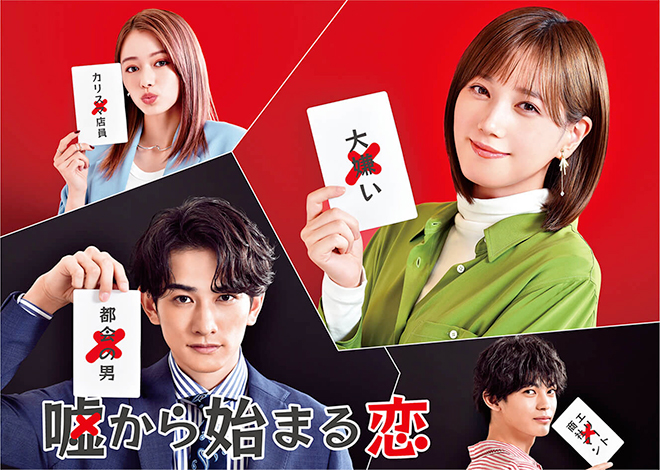 Date: From 11.00 p.m., 27 June 2021
Scriptwriters: Sugihara Noriaki (Mega Bank Saishuu Kessen, Mamagoto), Matsuda Saya (Ryusei Wagon, Ashita Mama ga Inai)
Director: Shinjo Takehiko
Theme Song: Lights by Da-iCE
Cast: Honda Tsubasa, Machida Keita, Yamamoto Maika, Kamio Fuju, Iwaoka Toru
Synopsis: 27-year-old Kasai Riko (Honda Tsubasa) was deceived by Masashi (Iwaoka Toru), her boyfriend of 10 years, and their engagement was called off. Hoping to find someone who will make her happy, she leaves her hometown of Aomori and comes to live with her younger cousin Shinohara Yuri (Yamamoto Maika) in Tokyo. She asks Yuri to bring her to a pick-up spot in Ginza so she can meet someone, and turns to her for guidance. A young man Izumi Haruhiko (Kamio Fuju) makes a move on the two of them. “Excuse me, do you have 3 minutes? My senior has been asking me to go over.” They are led by the rather glib Haruhiko to Kamoshita Junnosuke (Machida Keita) who works for a large trading company and talks about himself as a city guy. Junnosuke is a handsome narcissist with a condescending attitude. A short while later, Riko who has had too much to drink, blathers and gripes to him about her ex-boyfriend in Tsugaru dialect. Realising that Yuri and Haruhiko have disappeared, Junnosuke mutters that Haruhiko was off the mark and had the nerve to foist her on him. This outrages Riko. The next morning, Yuri also learns that Haruhiko actually lives on part-time work and lied that he is Junnosuke’s junior at the trading company. She declares that she has no time for a shallow person like him. After having the worst possible encounters, Riko and Yuri seek better luck by participating in an online game. However, Junnosuke and Haruhiko show up once again.
Website: www.ntv.co.jp/usokoi
Twitter: twitter.com/usokoi_ntv

This blog contains information and musings on current and upcoming Japanese dramas but is not intended to be comprehensive.
View all posts by jadefrost →
This entry was posted in NTV, Summer 2021 Drama Specials and tagged Honda Tsubasa, Uso kara Hajimaru Koi. Bookmark the permalink.