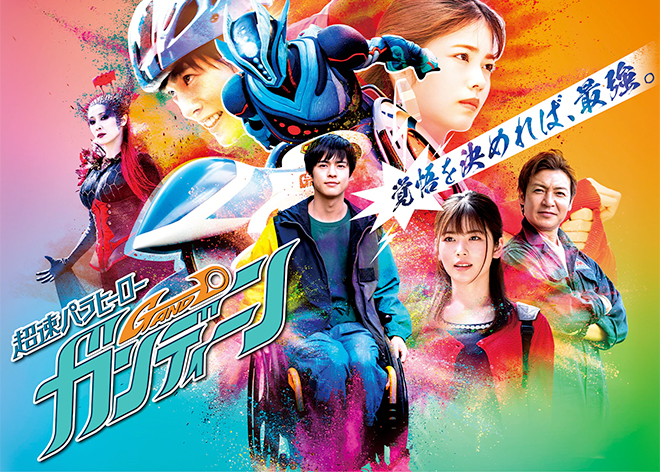 Story
17-year-old high school student Morimiya Taishi dreams of becoming a top wheelchair track and field athlete. 24-year-old Fukai Kei, a graduate student and former track and field athlete, takes on the role of his coach. Taishi devotes himself to training with her. One day, a mysterious object falls from the sky accompanied by a thunderous sound. It is actually a spacecraft’s escape pod. A handsome alien named Guu, who escaped a massacre on Earth’s twin star by the Eltron tribe and has come to earth with a mission, is inside. A huge monster Lagert pursues him and attacks the small factory that Taishi’s father runs in the outskirts of Tokyo. At that moment, the Mode Shifter that Guu hands over to Taishi lights up and envelopes Taishi’s body. His whole body and wheelchair are covered in special protective gear. Transformed into Super Hero Gandeen, Taishi charges at the monster.

Characters
Okuno So as Morimiya Taishi
A bright and positive second-year high school student. He has had to live life in a wheelchair after a car accident when he was 8 years old. As his dream is to be an astronaut, he has been building up his physique and taking a shot at the para-athletics’ wheelchair class. He gains the ability to transform into Gandeen from the power the comes from the alien named Guu.

Koshiba Fuka as Fukai Kei
A graduate student at Asahi College of Physical Education who has chosen to specialise in coaching. She used to be a middle-distance runner athlete but felt the limits of her own ability and chose to make a career in research. Although she has never had anything to do with para-athletics, she unexpectedly ends up assuming responsibility for coaching Morimiya Taishi.

Hayashi Karasu as Guu/Fos
A handsome alien around the age of 17 to 19 who belongs to the Meiden tribe of Earth’s twin star, Arat. He has fled a massacre by the Eltron tribe from the same star and came to Earth with a mission. He gives Morimiya Taishi the ability to transform but does not even realise that he himself has other abilities.

Mizuno Miki as Laroux
A member of the Eltron tribe which is eliminating other tribes on the star called Arat in an attempt to gain possession of Arat. She learns the secret about the tremendous power that Fos possesses and pursues him to Earth in with the intention of exploiting it.

Tsuruno Takeshi as Morimiya Gen
Morimiya Taishi’s father. A man whose positivity surpasses his son. He is a technical expert who runs Morimiya Motors, a small factory in the outskirts of Tokyo, and has been developing a manned space rocket in order to make Taishi’s dream a reality.

Wada Soko as Sakamoto Motoo
A professor at Asahi College of Physical Education who is Fukai Kei’s supervisor. Morimiya Gen’s childhood friend and the person who encouraged Gen’s son Taishi to participate in the para-athletics’ wheelchair class.

This blog contains information and musings on current and upcoming Japanese dramas but is not intended to be comprehensive.
View all posts by jadefrost →
This entry was posted in NHK, Summer 2021 Dramas and tagged Chosoku Parahero Gandeen, Koshiba Fuka, Mizuno Miki. Bookmark the permalink.