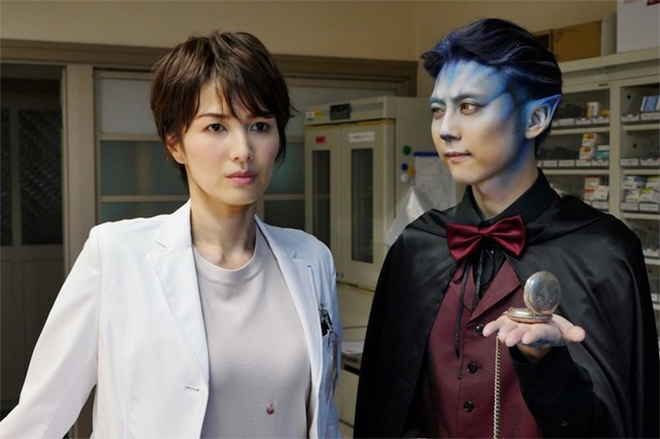 Déjà Vu
Story: Minamino Hikari (Kamishiraishi Moka) is an ordinary university student who lives with her father Masataka (Tsurumi Shingo) and mother Rinko (Arona). But lately, she has had a frequent experiences which give her a sense of déjà vu and she always suffers a severe headache after such an experience. On the morning of Hikari’s birthday, she sees a man in a mask sneak into her room and gets involved in an incident. Her father has been conducting research at the university with Shindo Aki (Shuri), a neuroscientist who is his colleague. How are Hikari’s déjà vu experiences connected to the research, and what will be her fate?
Cast: Kamishiraishi Moka, Tsurumi Shingo, Shuri, Arona

Sanzu no Kawa Outlet Park
Story: Kimura Takashi (Kato Shigeaki) repeatedly gets into trouble and has not had a bright life due to his menacing looks. He loses his life because of some incident and when he awakens, he is right in front of a shopping mall called Sanzu no Kawa Outlet Park where the souls of the dead cross into the afterlife. . Ohara Mei (Shimazaki Haruka) is a patient whom Takashi encountered at the hospital where he works. She has been in and out of the hospital since she was a child. However, she got to know Takashi and the two of them gradually open up to each other. She also dies and ends up meeting him again at Sanzu no Kawa Outlet Park.
Cast: Kato Shigeaki, Shimazaki Haruka, Yunho, Imo Haruka

Naru
Story: Iwaya Kentaro (Matayoshi Naoki) has risen to the top to become a well-known professional shogi player. Even though it was not easy to get there, he has forgotten the people who extended help to him and playing shogi with sincerity. One day, Iwaya is playing a game with an AI opponent. When he turns over a shogi piece like usual, there are characters written on it that he has never seen before. Then the AI opponent turns another piece over and a woman’s name appears. Iwaya is unable to conceal his shock. In fact, he was photographed with this woman by a weekly magazine last year and is the midst of divorce proceedings with his wife. What will he think as he looks back on his life through this game?
Cast: Matayoshi Naoki, Asano Kazuyuki, Kudo Mio

Ato 15-byou de Shinu
Story: Mikami Megumi (Kichise Michiko) is a pharmacist. One night, while she is working in the medication room at the clinic when she is suddenly unable to move her body. She sees a red spray and a suspended bullet right in front of her. It looks like someone was shot dead by a bullet but time also appears to have stopped. A person claiming to be Death (Kaji Yuki) appears to tell Megumi that she has 15 seconds left to live. Wanting to unravel the truth in 15 seconds, Megumi takes action with grim determination. What will she do?
Cast: Kichise Michiko, Kaji Yuki, Yamaguchi Mayu, Akama Mariko

This blog contains information and musings on current and upcoming Japanese dramas but is not intended to be comprehensive.
View all posts by jadefrost →
This entry was posted in Fuji TV, Summer 2021 Drama Specials and tagged Kamishiraishi Moka, Yo ni mo Kimyouna Monogatari Series. Bookmark the permalink.