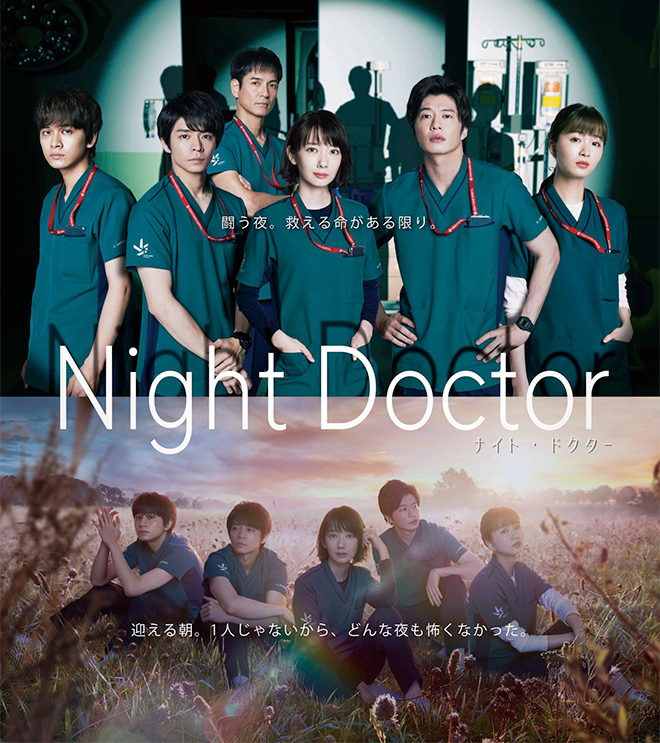 Story
Aiming to reform working practices for its hospital staff, Hakuoukai Group establishes a team of emergency medical doctors called Night Doctors who only work at night while maintaining the system of accepting any patient 24 hours 365 days a year at its branch hospital Hakuoukai Asahi Kaihin Hospital. Doctor Asakura Mitsuki chooses Night Doctors as her new place of work. On the first day, Mitsuki, Naruse Akito, Fukazawa Arata, Sakuraba Shun and Takaoka Yukiho gather at the staff station. Their supervising doctor Hongo Toru is strict in only wanting those who will follow his lead. These five doctors of completely different ages, personalities and values begin working as night doctors with the motto “Refuse no patient.” Three people are seriously injured in a fall at a construction site, and Mitsuki is relieved that Hongo has agreed to accept all of them. Both Fukazawa and Sakuraba, who are new to emergency care, are at a loss when the patients are rushed to the hospital. The experienced Naruse responds to Hongo as Mitsuki and Yukiho get to grips with the situation. Just as the emergency treatment begins, they are contacted about the discovery of more people with serious injuries at the site. However, seven other hospitals have already refused to admit these people. Naruse is about to reject the request since they cannot cope with doctors that are of no use. But Hongo commands that he accept and brusquely states that they just have to quickly stabilise the three patients who were brought in earlier. However, one of the new patients whose leg has been severely injured experiences crush syndrome. Hongo instructs Mitsuki to amputate it but … …

Characters
Haru as Asakura Mitsuki
A doctor with the strong conviction of taking in any type of patient at any time. When she learns that Hakuoukai Asahi Kaihin Hospital is recruiting emergency doctors to work night duty, she applies in the belief that it will be a place where she can put her beliefs into practice. Although she elatedly starts work as a night doctor, the reality she faces is vastly different from the ideals she had envisioned. As she hates to lose and is the type to take action and speak her mind, she baffles the people around her. But she has the kindness to be able to empathise with other people. While she is ambitious and most passionate about emergency medical care, she can get too emotionally attached and lack composure. However, her zeal for her work gradually changes the attitudes of her fellow night doctors. She spends her days off with her boyfriend and thinks that she is doing well in both her professional and personal life but … …

Tanaka Kei as Naruse Akito
He was a senior to Asakura Mitsuki when they were both in emergency medical care and they are reunited when Night Doctors is formed. A cool, matter-of-fact realist, he behaves condescendingly and says a lot of offensive things. He has a tough, stoic character and believes the only thing he needs in the medical field are skills are solid skills. There was a time when he cared for patients just like Mitsuki but an incident caused him to keep his distance from patients. As a result of his past experience, he feels that Mitsuki, who tends to be thorough with patients, is not suited to be an emergency doctor which requires hard decisions, and takes every chance to encourage her to change departments. However, as he watches Mitsuki and the young doctors do their best with patients, he recalls what he had begun to forgot as a doctor. His life also starts to change since they live in the same dorm too and spend a lot of time together.

Kishi Yukta as Fukazawa Arata
A former resident. His parents died early and he has been taking care of his sickly younger sister. Wanting to make her healthier, he became a doctor but he does not have a strong beliefs like Asakura Mitsuki and Naruse Akito. He had been working as a physician at Hakuoukai Asahi Kaihin Hospital and seen colleagues at the emergency department burn out from the gruelling work. He would never want be an emergency doctor. But at that juncture, he is approached by the hospital’s director Yakumo Norito to work as a night doctor, he accepts the request since his sister has been under the care of this the hospital from long ago. Even though he lacks the skills, motivation and confidence, he is gradually inspired by Mitsuki and the rest. He starts to look out for Mitsuki whose personal life is in shambles because she gives her job top priority.

Kitamura Takumi as Sakuraba Shun
The life of the team, he is bright, friendly and always cheerful among the members of Night Doctor. He was a resident but has never handled seriously injured patients brought in for emergency treatment and is utterly confused the first time he finds himself on the frontline. It was him dream to become an emergency doctor but he has not set foot in emergency medical care until now due to personal issues as well as his family.

Okazaki Sae as Takaoka Yukiho
She acts high-handed but she is well regarded because she thinks fast and has a sense of responsibility as a doctor. However, there is no way she will dedicate her life to her job. No matter how busy she is, she always pays attention to her appearance. Her boyfriend is a successful restaurant owner – handsome, highly educated, high earner. She seems to be a lucky woman whom everyone envies but she is actually dealing with an inner struggle. As a person who has been obsessed with appearances such as status and prestige, how will her heart change?

Sawamura Ikki as Hongo Toru
He had been a night-duty emergency doctor in New York when he was forced to return to Japan by Yakumo Norito, the director of Hakuoukai Asahi Kaihin Hospital, to form Night Doctor. He reluctantly agreed to be the supervising doctor to develop Japan’s first night doctors if Yakumo did not mind the number of people who would remain when he takes charge. He bluntly tells Asakura Mitsuki and the other night doctors, “I’m not going to take you by the hand and teach you step by step if you are a newcomer,” “Only those who can keep up, follow me.” Despite his remarkable skills, he is obstinate, sarcastic and strict in his guidance, and has no intention of being loved by his subordinates. He gets into occasional clashes with the doctors who work in the day and Night Doctor ends up facing a sudden survival crisis.

Maya Miki as Sakuraba Reiko
The chairwoman of Hakuoukai. She closely watches Asahi Kaihin Hospital which has instituted reforms to work practices through the newly-created Night Doctor. If Night Doctor is a success, it will greatly raise the profile of Hakuoukai in the eyes of the public. But at the same time, this is a project that cannot fail. She also has another reason for being wary of Night Doctor … … 「

Ono Takehiko as Yakumo Norito
The director of Hakuoukai Asahi Kaihin Hospital. He is the person who proposed the creation of Night Doctor at one of Hakuoukai Group’s regular meetings, and also pressed Hongo Toru to come back from New York to serve as Night Doctor’s supervising doctor. What is his motive for introducing these drastic work reforms?

This blog contains information and musings on current and upcoming Japanese dramas but is not intended to be comprehensive.
View all posts by jadefrost →
This entry was posted in Fuji TV, Summer 2021 Dramas and tagged Haru, Night Doctor, Tanaka Kei. Bookmark the permalink.