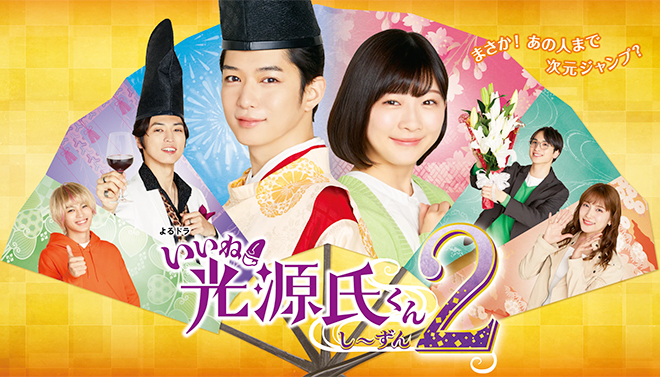 Story
Hikaru Genji returns on his own accord from the Heian period to Fujiwara Saori as she gazes up at the fireworks alone. From that day on, the two of them begin a heart-pounding cohabitation again. Saori had ended her contract and moved to a new place in order to forget her memories. However, she never thought that Hikaru would come back and now she has to live in very close quarters with him since her one-room apartment is much smaller than the last. Chujou, Cain and Saori’s younger sister Shiori are happy to see Hikaru return. They help out with the move while watching the progress of Hikaru and Saori’s romance with amusement. However, the appearance of Ichijo Toru, a peer at Saori’s workplace who likes her, unexpectedly strains the relationship between Hikaru and Saori. On top of that, Saori learns from her boss Abe about the existence of a beautiful teacher called Murasaki at the waka classical Japanese poetry class that he has started attending. She starts fretting that this woman may be Hikaru’s wife Murasaki no Ue.

Characters
Chiba Yudai as Hikaru Genji
The protagonist in Murasaki Shikibu’s The Tale of Genji. He is a fictional character and his role is an imperial prince during the Heian period. People call him the shining prince because of his good looks and he has romanced a great number of females. However, he is forced to flee the capital due to a scandal. While he is on the way to Suma, he ends up time travelling to the present Reiwa era and lived in Fujiwara Saori’s house until he found out how to go back to the world of The Tale of Genji.

Ito Sairi as Fujiwara Saori
An office lady who works for a manufacturer’s planning and sales department. She keeps thinking that she is plain compared to her beautiful younger sister Shiori and has no self-confidence. She starts living with Hikaru Genji again when he comes back after six months but her lack of confidence in romance and anxiety about the future hinders the development of their relationship. Her colleague Ichijo Toru likes her and she is flustered by the sudden romantic attention.

Kiriyama Ren as Chujou
A character in The Tale of Genji. Hikaru Genji’s brother-in-law. He feels a sense of competitiveness with Hikaru who is fawned over by the people around him and tries to be his rival in love but is also his good friend. While he is on the road to Suma in an effort to encourage Hikaru who has fled the capital, he encounters something unusual.

Ichinose Hayate as Ichijo Toru
Fujiwara Saori’s colleague who joined the company the same time as she did. He has returned from a training stint in New York. He has the habit of speaking in English when he gets excited. As he is easygoing and full of confidence, he makes an aggressive move on Saori without caring about what other people think.

Konno Ayaka as Murasaki no Ue
One of the heroines inThe Tale of Genji and the woman whom Hikaru Genji cherished the most. She is supposed to be waiting in the capital for Hikaru’s return but … …

This blog contains information and musings on current and upcoming Japanese dramas but is not intended to be comprehensive.
View all posts by jadefrost →
This entry was posted in NHK, Summer 2021 Dramas and tagged Ii ne! Hikaru Genji-kun Series. Bookmark the permalink.