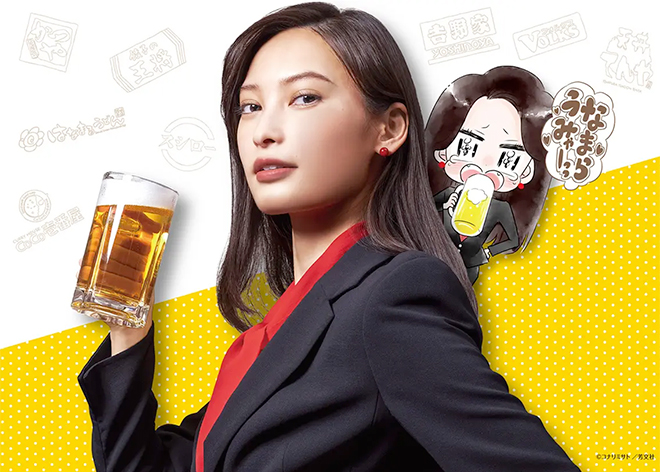 Story
28-year-old Benikawa Mei works for a cosmetics company’s public relations department. She is not only beautiful but was selected to be the leader of the department at a young age. While Mei is respected within the company for her job performance, she is also the target of much jealousy. There are rumours that she is quite fussy about what she eats in order to maintain her beauty and figure that is the envy of everyone. But in reality, this is actually quite the opposite. Mei rewards herself by drinking alone at a food chain outlet on her way home from work. No matter how arduous things go, she believes her work and life will go well if she can freely indulge in her favourite food. Mei enjoys a blissful glass and eats delicious food at a reasonable price to unwind after a day of hard work and psych herself for the next day.

Characters
Omasa Aya as Benikawa Mei
The team leader of the public relations department of a company selling affordable cosmetics. A stylish young woman whose beauty and capability are admired by everyone. Her unexpected hobby of drinking alone at a food chain outlet is not well known.

Kiriyama Ren as Asaoka Ruiji
A publicist for a long-established rival cosmetics company. He always laughs flippantly. His soft permed hair and goatee are his trademarks. Although he is a frivolous guy who is unfathomable, he seems competent.

Omoto Karen as Karasuma Yuri
A rookie who has been reassigned to the public relations department. She is very passionate about her work but has no professional skills and keeps making mistakes. She is like a bomb that has been tripped.

Taimura Mitsuki as Goto Wakana
A member of the public relations department, she joined the company at the same time as Benikawa Mei. She has endured six years of exhausting work with Mei and they are comrade in arms who acknowledge each other’s abilities. Even though she is in charge of public relations, she excels in art direction.

Shibuki Jun as Koreeda Choko
A company director who was formerly Benikawa Mei’s direct boss. She is harsh at times and kind at others. Her style and behaviour are very flamboyant but she can be counted on to support the company.

Ending Theme
So What by SPiCYSOL

This blog contains information and musings on current and upcoming Japanese dramas but is not intended to be comprehensive.
View all posts by jadefrost →
This entry was posted in Summer 2021 Dramas, WOWOW and tagged Hitori de Nomeru mon!. Bookmark the permalink.