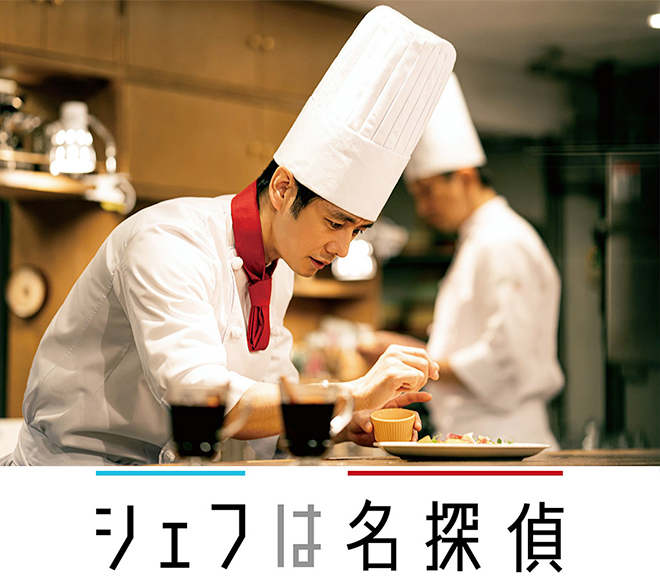 Story
There is a small French restaurant called Bistro Pas Mal which sells exquisite food and its own mulled wine in a nook of a working class neighbourhood in Tokyo. Its chef Mifune Shinobu trained at French-style inns and restaurants in the countryside of France for more than 10 years but has completely no interest in Michelin stars, status or titles. He has an outstanding memory of the flavours, colours and scents of ingredients and people’s faces, and also notices the smallest details. Despite Mifune’s taciturn, inscrutable nature and artisan spirit, he cares about people and wants to heal them with his food. However, his kind intentions can easily become meddlesome. Takatsuki Tomoyuki becomes a waiter at Bistro Pas Mal after a strange turn of events. But not long after he begins working there, he feels bewildered by the stream of troublesome customers coming to the restaurant such as the fussy Kasuya Koichi who makes special requests as well as Tsuruoka Tadashi who gets into an argument with Kawade Keiko, a woman that seems to be his girlfriend, and ends up finding fault with the dessert. Mifune helps unravel the problems or worries of these customers with his extraordinary powers of observation and deduction.

Characters
Nishijima Hidetoshi as Mifune Shinobu
The chef of French restaurant Bistro Pas Mal. He trained at French-style inns and restaurants in the countryside of France for more than 10 years. He is composed, mild-mannered and shows compassion for people.

Hamada Gaku as Takatsuki Tomoyuki
A waiter at Bistro Pas Mal. He is the restaurant’s newest member and his affability had been detected by Mifune Shinobu. In fact, he has a hidden talent … …

Kamio Yu as Shimura Yoji
A chef who admires Mifune Shinobu. He had been working at an upscale hotel’s main dining room but became Bistro Pas Mal’s sous chef when he appealed to Mifune at the same time as the French restaurant’s opening. Despite his fierce look and quick temper, he is actually a sentimental person.

Ishii Anna as Kaneko Yuki
A former office lady whose love for wine developed into a job as a sommelier at Bistro Pas Mal. She loves haiku so much that she joined the shopping street’s haiku group.

Sato Kanta as Ogura Daisuke
The owner of Bistro Pas Mal. He is a young businessman who has many restaurants including Bistro Pas Mal but he does not look like one and pays no attention to fashion.

Hashimoto Manami as Uehara Misato
A mysterious beauty who comes to Bistro Pas Mal as a customer one day but strangely speaks to Mifune Shinobu in a familiar way.

This blog contains information and musings on current and upcoming Japanese dramas but is not intended to be comprehensive.
View all posts by jadefrost →
This entry was posted in Spring 2021 Dramas, TV Tokyo and tagged Chef wa Meitantei, Hamada Gaku, Nishijima Hidetoshi. Bookmark the permalink.