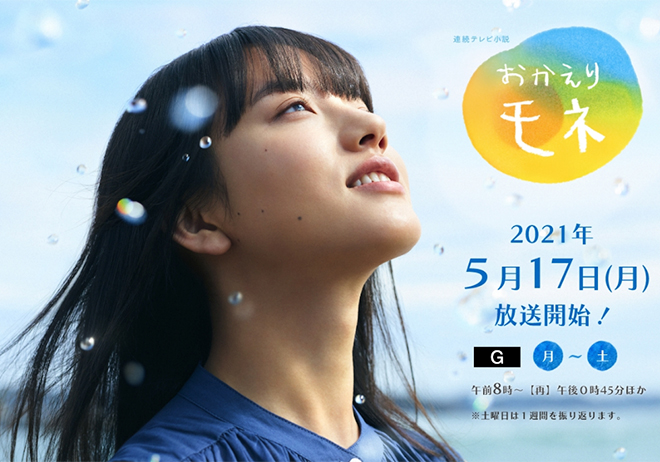 Story
Nagaura Momone lives with her parents Koji and Ayako, grandfather Tatsumi and younger sister Michi on an island with a rich natural environment in Kesennuma Bay, Miyagi Prefecture. After graduating from high school in the spring of 2014, she moves to the inland city of Tome on her own. However, she fails every university entrance exam. While trying to figure out what to do with her life, Momone begins to work as a trainee forest guide. One day, she reaches a turning point. A popular weather forecaster Asaoka Satoru from Tokyo comes to Tome City as a weather presenter. As Momone walks in the mountain with him, she is told that weather forecasting can read the future. His comment leaves a deep impression on Momone and she resolves to become a weather forecaster. She studies hard to obtain the qualifications to become one. However, the pass rate for the exam is only 5%. Momone has never been good in studying and seems disheartened. With the support of Suganami Kotaro, a young doctor involved in community healthcare, and the locals in Tome City, she finally passes the exam. Momone moves to Tokyo. After starting work at a private weather forecasting company, she learns that weather forecasting actually covers a broad range of things. She becomes keenly aware that people’s lives depend very much on the weather. Momone grows in her role through a series of successes and failures. Several years later, in 2019, Momone who has become a full-fledged weather forecaster, sees a major typhoon hammer cities across Japan. Wanting to use the knowledge and skills that she has gained thus far to help her hometown, she decides to head to Kesennuma.

Characters
Kiyohara Kaya as Nagaura Momone
Born in 1995, she grew up on an island with abundant nature off Kesennuma Bay. She has a cheerful and carefree personality. During her junior high school days, she was devoted to alto saxophone. After graduating from high school, she left her hometown and family and started working for a forestry cooperative in Tome City. That is where she learns about the possibilities and appeal of weather forecasting, and eventually aspires to become a weather forecaster.

Uchino Masaaki as Nagaura Koji
Nagaura Momone’s jovial and carefree father. He works at a local bank instead of taking over the family’s fishery business. He was a well-known trumpet player when he was young and introduced Momone to music. He loves his two daughters and cannot help but worry about Momone who has left the family to live in Tome City. He is no match for his wife Ayako.

Suzuki Kyoka as Nagaura Ayako
Nagaura Momone’s serious mother. She was an elementary school teacher and native of Senda before she married Nagaura Koji. Charmed by the warmth of the islanders, she moved over after marriage. She currently helps out in her father-in-law’s oyster farming while thinking about reopening the guesthouse that her late mother-in-law had managed. She believes in Momone who is searching for her own future in Tome City and supports her.

Makita Aju as Nagaura Michi
Nagaura Momone’s sister who is two years younger. She is good in her studies and thinks ahead before she acts. Although the sisters have totally different personalities, they have always been on good terms. She intends to take charge of the family business in place of her father and older sister and concentrates on her studies at a fisheries high school. She later gets a job at a marine lab. She can be clumsy and obstinate.

Nagase Ren as Oikawa Ryo
After graduating from high school, he immediately went on board a fishing boat as an fisherman’s apprentice. He is popular because he has outstanding reflexes and shows consideration for others but he does not care and is easygoing. He has strangely got along with Nagaura Momone since they were children and they are close friends who know each other well. He is actually feeling troubled about his relationship with his father.

Nishijima Hidetoshi as Asaoka Satoru
A well-known weather presenter on television. He is a mild-manner person and teaches Nagaura Momone that “weather forecasting is a world where she can predict the future” when he visits Tome City. He works for a private weather forecasting company in Tokyo and is also actively working on the “weather business” in various fields.

Imada Mio as Jinno Marianna Riko
A young weather forecaster in charge of the live segment of the morning news programme where Asaoka Satoru is a weather presenter. She is gorgeous and always smiling on the job but she has the ambition to become a newscaster someday.

Takaoka Saki as Takamura Satoko
The person in charge of the news programme and the copy editor who manages the local news department’s weather team’s production within the TV station. She is very particular about carefully selecting information that is accurate and communicating it. As a result, she sometimes comes into conflict with Asaoka Satoru who steps into her domain by trying to convey weather information.

Sakaguchi Kentaro as Suganami Kotaro
A doctor at the clinic opened by the wealthy Nitta Sayaka. He belongs to a university hospital in Tokyo and comes to this clinic every other week. He is always businesslike and curt maybe because he has not much interest in healthcare for the local community.

Natsuki Mari as Nitta Sayaka
A wealthy woman who lives in Tome City. She is rumoured to be a granddaughter of a vassal of the Date clan and her nickname is “princess”. She entrusts the mountain and forests that belong to her to the forestry cooperative, and also runs a cafe and clinic. An old friend of Nagaura Momone’s grandfather Tatsumi, she gives Momone lodging when Momone comes to Tome City. She is a dynamic, broadminded person, and sternly drills Momone about the richness of the forest.