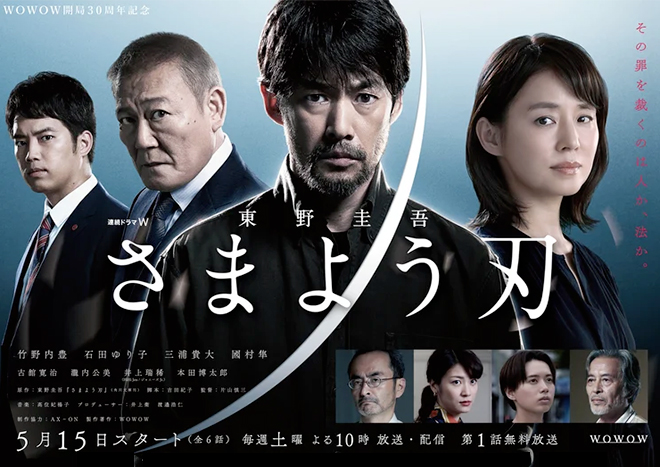 Story
After his wife Eriko passed away, Nagamine Shigeki raised their only daughter Ema on his own. Ema has grown up and is now a high school student. Father and daughter live modestly and support each other despite their occasional arguments. One night, Ema fails to return home from her part-time job and is found brutally murdered after that. A grief-stricken Nagamine loses patience with the police investigation which makes little progress. Several days later, he receives an anonymous phone call telling him the criminals’ names and addresses. After some hesitation, Nagamine heads to the apartment where he finds a video capturing Ema’s gruesome murder while he rummages the place. When one of the criminals called Tomozaki Atsuya returns home, he inadvertently kills him, and goes on to pursue Sugano Kaiji who is the main culprit. Both Kaiji and Atsuya are underaged youth that the death penalty does not apply to under the current law. Are Nagamine’s actions right or wrong? His flight and revenge is about to polarise public opinion.

Characters
Takenouchi Yutaka as Nagamine Shigeki
A man whose wife passed away early and had to raise their daughter Ema on his own. However, Ema was murdered and he decides to take revenge on her killers. Hunting is his hobby.

Ishida Yuriko as Kijima Wakako
A woman who helps run her father’s pension in Nagano Prefecture. She previously lost her only son due to a sudden illness. She has now returned to her family home.

Kunimura Jun as Hisatsuka Kozo
A superintendent with the Tokyo Metropolitan Police Department’s First Investigation Division. He is the commanding officer pursuing the fugitive Nagamine Shigeki.

Miura Takahiro as Oribe Takashi
A police sergeant with the Tokyo Metropolitan Police Department’s First Investigation Division. Although he pursues Nagamine Shigeki as a detective, he identifies with him because he also has a daughter.

Takiuchi Kumi as Odagiri Yukari
A reporter of a weekly magazine who relentlessly pursues Nagamine Shigeki as he goes on the run and the case of the youth that caused him to become a fugitive. She would grasp at anything to sensationalise the story.

Inoue Mizuki as Nakai Makoto
A high school student who was complicit in the rape and murder of Nagamine Ema. He ends up heavily involved in the police investigation and Nagamine Shigeki’s revenge.

Honda Hirotaro as Kijima Takaaki
Kijima Wakako’s father. He runs a pension that Nagamine Shigeki ends up staying in. He is distressed that his daughter is giving assistance to Nagamine Shigeki who is on the run.

Ichikawa Riku as Sugano Kaiji
The main culprit in the rape and murder of Nagamine Ema. He acted as he did knowing that he will not be punished by the law because he is underaged.

Namura Shin as Tomozaki Atsuya
One of the guys who raped and murdered Nagamine Ema. He is underaged and a habitual criminal who does bad things with Sugano Kaiji.

This blog contains information and musings on current and upcoming Japanese dramas but is not intended to be comprehensive.
View all posts by jadefrost →
This entry was posted in Spring 2021 Dramas, WOWOW and tagged Furutachi Kanji, Horibe Keisuke, Ishida Yuriko, Kunimura Jun, Samayou Yaiba, Takenouchi Yutaka. Bookmark the permalink.