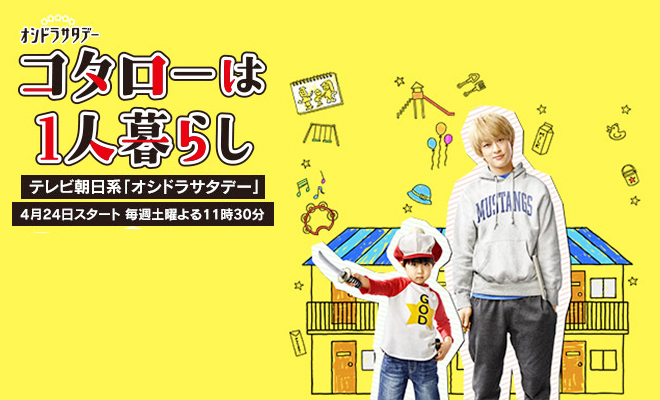 Story
Struggling 35-year-old manga writer Karino Shin has not gained much popularity after winning a publisher’s manga award. He lives on the prize money and shuts himself away in his apartment the whole day. One day, a 5-year-old boy called Sato Kotaro suddenly moves into the apartment building and becomes Karino’s neighbour. He announces in a curious manner of speech that he is staying on his own even though there is a rule forbidding children from living here. A puzzled Karino initially wonders why a kid is living on his own and looks all ready to flee to avoid getting into any trouble. When Kotaro does not find a bath in the apartment, he comes over again and Karino tells him about the public bath nearby. Karino sighs that a troublesome fellow has moved in as he sees the boy off. However, he suddenly gets worried about Kotaro after seeing a frightening looking resident Tamaru Isamu ranting on a phone and a news story on TV about the disappearance of a 5-year-old. Karino hastily goes after Kotaro and return to the apartment building together. The almost expressionless Kotaro is dependable beyond his years and has an adult-like behaviour although there are occasions when he seems childlike. What is the reason behind his grown-up words? Through their encounters with Kotaro, the residents of the apartment building including Karino realise their responsibilities as adults and the importance of empathy as they begin to care for the boy.

Characters
Yokoyama Yu as Karino Shin
A resident of Apartment Shimizu. A struggling manga artist who has remained in obscurity after winning a publisher’s manga award. He shuts himself away in his apartment the whole day and lives the life of a good-for-nothing. One day, a 5-year-old boy Sato Kotaro moves in next door to him. At first, he is suspicious of Kotaro’s adult-like behaviour which puts him to shame and finds him a bit of a bother. But when he sees the boy go to the public bath on his own at night, he gets worried and instinctively follows him. Since then, Kotaro has been on his mind and he ends up doing things for him.

Kawahara Eito as Sato Kotaro
A 5-year-old resident of Apartment Shimizu. Although children are not allowed in the apartment building, he moves in on his own since the landlord willing to let him stay if he can pay the rent. He does not smile and is almost expressionless. He likes to imitate his favourite anime Tonosaman, speaking like a feudal lord. He subscribes to five newspapers and even separates the rubbish perfectly. He is unexpectedly dependable for a 5-year-old but at times comes across childlike. What reason is hidden behind his grown-up desire to become stronger?

Yamamoto Maika as Akitomo Mizuki
A resident of Apartment Shimizu. She is a hostess at a bar and uses the name Miki. She has a soft spot for Sato Kotaro and gives him sweet treats which she is good at making. She is always cheerful and vivacious but she is actually troubled by her boyfriend who mooches off her.

Momota Kanako as Kobayashi Ayano
A competent lawyer who works for the law firm Suzuno. She delivers money which is a “donation from a kind person” to Sato Kotaro, once a week on the orders of Suzuno Makio, the owner of the law firm. She is treated with warmth by Kotaro every week on behalf of the kind person who does not make an appearance. But she is actually not good with children and worries that she will not be able to keep up her mood.

Mitsuishi Ken as Suzuno Makio
The boss of the law firm, Suzuno. He watches over Sato Kotaro and the lawyer Kobayashi Ayano who has been entrusted with the important task of delivering money to Kotaro.

Okura Koji as Fukuno Ippei
The editor in charge of Karino Shin. He is sharply critical of Karino’s outdated drawings but values his ability to compose stories. In other words, tough love. He secretly watches over Karino and Kotaro and supports them behind the scenes.

Issey Ogata as Shimizu
The landlord and landlady of Apartment Shimizu. An easygoing old man and his wife who is a worrier. Although children are not allowed in the apartment building, they allow Kotaro to live alone as long as the rent is being paid.

Namase Katsuhisa as Tamaru Isamu
A resident of Apartment Shimizu. Contrary to his boorish and scary appearance, he has a great love for children. He dotes on Sato Kotaro. As he has not been able to see his son who is being raised by his ex-wife, he feels lonely and is most happy to play with Kotaro.

This blog contains information and musings on current and upcoming Japanese dramas but is not intended to be comprehensive.
View all posts by jadefrost →
This entry was posted in Spring 2021 Dramas, TV Asahi and tagged Kotaro wa Hitorigurashi, Mitsuishi Ken, Namase Katsuhisa, Takito Kenichi. Bookmark the permalink.