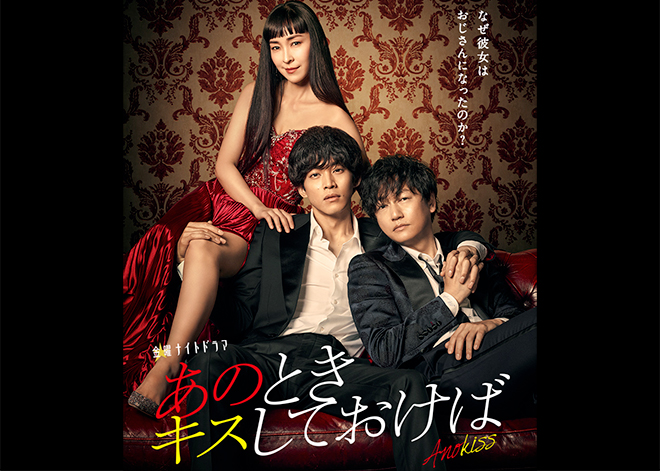 Story
Momochi Nozomu is a useless and rather unfortunate 32-year-old supermarket employee. He constantly fails at his job such as inadvertently overturning the tomatoes that he had been carrying and getting no help from the cleaner Tanaka Masao who only clucks in disapproval. He has no dreams, goals or desire to have a romance. Nozomu’s only interest is to stay at home on weekends and read his favourite manga Seika no Sora. Seika no Sora’s writer Yuizuki Tomoe goes by the pen name Kanikama Joe. She has been agonising over the development of the story and occasionally gets attacked by anti-fans on social media. But she has cemented her popularity with the support of Takamizawa Haruto, the deputy chief editor of the weekly magazine Shonen Maximum. One day, Momochi is entangled with a difficult customer at the supermarket’s checkout counter when Yuizuki Tomoe, the writer of his favourite manga, comes to his rescue with a splendid kick. Several days later when they happen to meet again, she reveals that she is Kanikama Joe which makes him speechless from emotion. Tomoe seems to take a liking to Momochi and before he knows it, he is asked to be her highly paid part-timer in a position like a housekeeper or servant. Momochi is made to take care of her and as a reward, he occasionally gets to read manuscripts of Seika no Sora which have yet to be published. Meanwhile, Tomoe’s values start to change through her interactions with him. Their relationship develops into something more than friends. Although Momochi is shaken, he gently refuses to be kissed one day. Tomoe is angered but invites him to travel to Okinawa with her. However, she gets involved in an accident and unexpectedly dies. Momochi is grief-stricken by the sudden loss of Tomoe. That is when a male stranger Tanaka Masao appears and claims to be Tomoe?!?!

Characters
Matsuzaka Tori as Momochi Nozomu
The person in charge of the fruits and vegetable section at the supermarket Yumehana. He is astoundingly useless and has been having a run of bad luck. The type who is unable to suitably help a person in need and cries for that person after that. Despite his incredible uselessness, he is a kind and good guy in every respect. He has no particular desire to advance in his career nor have a romance. His greatest bliss is to stay at home on weekends and read his favourite manga Seika no Sora. Although he gets acquainted with Yuizuki Tomoe, who is the writer of Seika no Sora, he feels uncomfortable and taken aback by her wealth and celebrity status. The worlds they live in are too different. He is soon hired for a hefty sum to be a housekeeper or servant. He gets ordered about but gets to see her hard work and unexpected weaknesses as a popular manga writer and they gradually grow close.

Aso Kumiko/Iura Arata as Yuizuki Tomoe
The writer of the manga Seika no Sora. Her pen name Kanikama Joe makes readers think she is a man. She is shockingly wealthy, stays in a magnificent house and always wears high end brands. But she confidently lives in the belief that this lifestyle is a result of her own hard work. She loves her work but gets very irritable and bizarre before deadlines. To take a breather, her hobby is to attend hula dance classes and go shopping at the supermarket where Momochi Nozomu works. She has many anti-fans because Seika no Sora is a big hit. Just when she is feeling tired of their abusive language, she meets the awkward and kind Momochi. She feels comfortable that he is a huge fan of hers and invites him to her house in a position like a housekeeper or servant. She is actually a divorcee and had been married to the editor Takamizawa Haruto for a year. She is very close to her mother because there is just two of them in the family.

Iura Arata as Tanaka Masao
An unappealing middle-aged cleaner who happened to be in the seat next to Momochi Nozomu and Yuizuki Tomoe on the flight to Okinawa. He encounters a freak accident and ends up swopping souls with Tomoe. The reason why he was on the plane bound for Okinawa and who he is will gradually be revealed.

Miura Shohei as Takamizawa Haruto
The deputy chief editor of the weekly magazine Shonen Maximum and the editor who has been in charge of Seika no Sora since its first issue. He is highly educated, good at his work, passionate, and magnificently handsome. He is a good working partner for Yuizuki Tomoe, and actually her ex-husband. They were barely married for a year before they got a divorce. They know all the embarrassing things about each other. The arguments between the characters in Seika no Sora are generally the same as their own arguments. Although he looks perfect, he is very proud and is the type to say beautiful, lofty words even when Tomoe tries to talk to him about her problems. However, he is not aware of it at all. He is saddened by Tomoe’s sudden death but begins to suspect there is something to hide when manuscripts for Seika no Sora continue to be completed and a strange middle-aged man claiming to be Kanikama suddenly shows up.

Meugmi as Tanaka Honami
Tanaka Masao’s wife. She works part-time at a shop that sells takeaway meals while running hula dance classes where she teaches middle-aged women the hula dance. Her hula dance classes are for females but when Yuizuki Tomoe forces her way into the class in the body of Masao to relieve stress through hula dance, her life starts to go off the rails.

Kishimoto Kayoko as Yuizuki Tae
Yuizuki Tomoe’s mother. As mother and daughter have lived on their own for a long time, they have their quarrels but are close. She is overcome with grief when Tomoe suddenly dies. However, she is horrified when a queer middle-aged man shows up at her daughter’s funeral shouting “Mother!” as he cries and even barges into her home. While she faces the facts that are difficult to accept, her interactions with her daughter begins to change. She likes handsome men.

This blog contains information and musings on current and upcoming Japanese dramas but is not intended to be comprehensive.
View all posts by jadefrost →
This entry was posted in Spring 2021 Dramas, TV Asahi and tagged Ano Toki Kisu Shite Okeba, Aso Kumiko, Iura Arata, Matsuzaka Tori, Megumi, Miura Shohei. Bookmark the permalink.