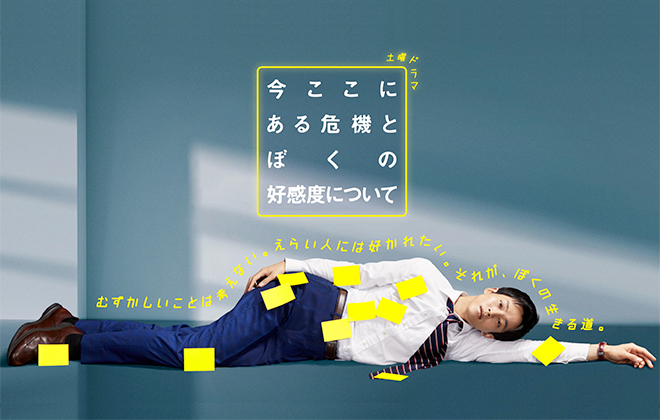 Story
The handsome Kanzaki Shin used to be a presenter for a TV station but his popularity has been flagging because he is careful to make only neutral and innocuous remarks. He transforms into a publicist for the prestigious Teito University after being personally called in by the university’s president Miyoshi. Miyoshi is his former teacher and values his tact, name recognition and background in media. Shortly after Kanzaki arrives at Teito University, he is summoned by its directors Suda, Kito and Mizuta and ordered to reach out to Kishima Minori, an unofficial researcher who has exposed a star professor’s misconduct relating to his thesis. She is actually an ex-girlfriend whom Kanzaki dated for just a while in their university days. Complying with the wishes of the university’s leadership to defuse the crisis, Kanzaki considers how to make sense of things. However, he gets pushed around by the indecisive president, directors with a lack of transparency, a boss who plays it safe, an overly liberal and eccentric professor, a cool but perceptive middle-aged secretary, a capable associate professor popular with the media, and righteous students from the media club. The situation steadily deteriorates. His encounter with Minori who blew the whistle on the misconduct, makes him begin to think something is wrong. Eventually, it becomes a huge crisis that is more than an internal issue and the university is forced to launch an investigation … …

Characters
Matsuzaka Tori as Kanzaki Shin
A handsome former TV presenter who was recruited mid-career for Teito University’s Public Relations Department. He was personally called by the university’s president Miyoshi who was his former teacher. His first priority is to maintain goodwill and he is good in getting along with people – does not say anything meaningful and never stirs up a storm of criticism.

Suzuki Anne as Kishima Minori
A post-doctorate student who works at Teito University’s Centre for Life Sciences. Although she was Kanzaki Shin’s girlfriend in university, he practically does not remember her. She is unable to overlook Professor Kishitani’s misconduct and blows the whistle.

Ikeda Narushi as Professor Sawada
An eccentric professor who is fighting to be in the top two at Teito University. As his specialisation is molecular biology, he becomes a member of the committee of inquiry into Professor Kishitani’s thesis as a result of Kishima Minori’s whistleblowing.

Kunimura Jun as Suda
A director of Teito University. He believes the priority is to publish research results that are widely recognised and obtain a lot of funds to ensure the university’s survival. He is a realist who is well-connected to political and financial circles, and is called the shadow president.

Matsushige Yutaka as Miyoshi
Teito University’s president. He scouts his former student for the Public Relations Department not long after he took up his post. He is indecisive and complains that academics are not suited to manage a university. But he is a superb archaeologist. He believes academic freedom is of utmost importance.

This blog contains information and musings on current and upcoming Japanese dramas but is not intended to be comprehensive.
View all posts by jadefrost →
This entry was posted in NHK, Spring 2021 Dramas and tagged Furutachi Kanji, Ima Koko ni Aru Kiki to Boku no Koukando ni Tsuite, Kunimura Jun, Matsushige Yutaka, Matsuzaka Tori, Suzuki Anne. Bookmark the permalink.