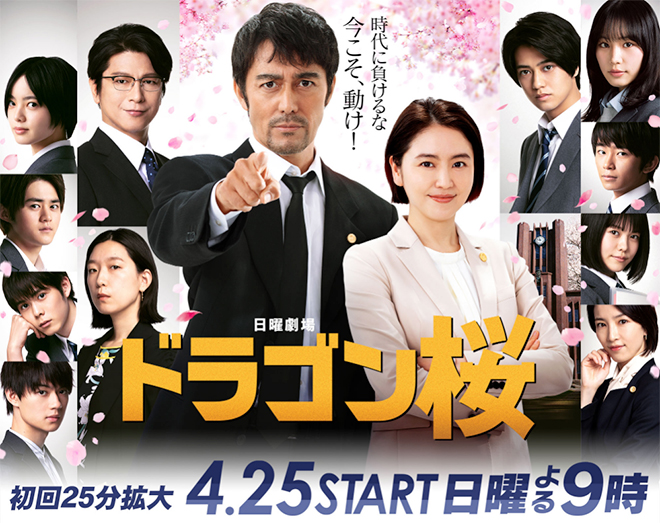 Story
Lawyer and former motorcycle gang member Sakuragi Kenji once produced students from the hopeless Ryuzan High School who successfully qualified for Tokyo University. After he left the school, he set up a law firm and moved from place to place offering management advice to private universities based on his achievements as a school rehabilitation expert. 10 years later, Ryuzan High School has been on the decline since Sakuragi’s departure. One day, he receives an offer from the school again to save it from its predicament. Vice principal Takahara Hiroyuki proposes a revival plan by Sakuragi. However, the chairman of the board Tatsuno Kumiko opposes a school centred on preparing students to get into university. Opinions are divided. Sakuragi does not mince his words or hesitate to refute an argument no matter who the other party is, and gave many young people courage. But what kind of changes can he bring about with his eloquence in the present day? With the transition from the Heisei to Reiwa era, there will also be a change in the university entrance exam to the new common test for university admissions which places more emphasis on students’ ability to think, make judgements, and express themselves rather than their knowledge. The students including Seto Akira, Hayase Nao and Iwasaki Kaede, who each have their troubles and problems, and their fates are about to be set in motion through their encounter with Sakuragi and his former student Mizuno Naomi who has become a lawyer at his firm.

Characters
Abe Hiroshi as Sakuragi Kenji
A lawyer and the owner of the law firm, Sakuragi. A former motorcycle gang member. Using a study method called the Sakuragi Method, he previously produced students from Ryuzan High School, which was on the verge of bankruptcy and had a low standard deviation score, who could qualify for Tokyo University.

Nagasawa Masami as Mizuno Naomi
A lawyer. She was one of the students of the Todai class that Sakuragi Kenji once taught. She passed the entrance exam for Tokyo University after a second try. After that, she was called to the bar and joined the law firm that Sakuragi runs. She and Sakuragi grapple with a new generation of high school students.

Takahashi Kaito as Seto Akira
A student of Ryuzan High School’s Todai special course. The son of the owner of Setoya, a ramen shop near school. His parents have passed away and he lives with his older sister who manages the shop alone. While he cares about his sister and helps out after school, he has no dreams and hopes for the future and thinks he will probably take over the shop somehow or other.

Minami Sara as Hayase Nao
A student of Ryuzan High School’s Todai special course. She was brought up in comfort and with a lot of love but she has never worked hard on anything. She requests to be taken into the special course in order to become someone who does her best.

Hirate Yurina as Iwasaki Kaede
A student of Ryuzan High School’s Todai special course and a top-level badminton player in Japan. She devotes herself wholeheartedly to everything she engages in. She faces a big hurdle because she tries to live up to the expectations of the people around her.

Kato Seishiro as Amano Koichiro
A student of Ryuzan High School’s Todai special course. His sense of inferiority is ingrained in him because he is constantly compared to his outstanding younger brother. Although he wants to prove himself to his family, he does not have the courage to do so.

Suzuka Ouji as Fujii Ryo
A student of Ryuzan High School’s Todai special course. He has a habit of looking down at other people as he topped the school year and does not fit in with the students.

Shida Sara as Kosugi Mari
A student of Ryuzan High School’s Todai special course. She scored top grades in humanities and has a high standard deviation score of 70. Even though she is outstanding academically, she has no interest in taking the entrance exams and is thinking getting a job after graduation. She keeps a distance from the other students as well as the teachers and has a secret.

Eguchi Noriko as Tatsuno Kumiko
The chairwoman of Ryuzan High School’s board. Since she became the chairman, the students’ academic performance has declined considerably and the school’s finances also being squeezed. However, she is hostile to Sakuragi Ken and tries to drive him out.

Yamazaki Ginnojo as Okuda Yoshiaki
Ryuzan High School’s principal. He cannot stand up to people in powerful positions and say no to Tatsuno Kumiko. However, a secret of his is discovered by Sakuragi Kenji who now has something on him.

Oikawa Mitsuhiro as Takahara Hiroyuki
Ryuzan High School’s vice principal. He is the person who asked Sakuragi Kenji to rebuild the school. He is a passionate teacher who puts the students’ education first and supports Sakuragi.

Kiba Katsumi as Tatsuno Kyojiro
Tatsuno Kumiko’s father. Ryuzan High School’s former chairman of the board. He handed over his position to his daughter, but he does not agree with her educational policy.

This blog contains information and musings on current and upcoming Japanese dramas but is not intended to be comprehensive.
View all posts by jadefrost →
This entry was posted in Spring 2021 Dramas, TBS/MBS and tagged Abe Hiroshi, Dragon Zakura Series, Eguchi Noriko, Nagasawa Masami, Oikawa Mitsuhiro. Bookmark the permalink.