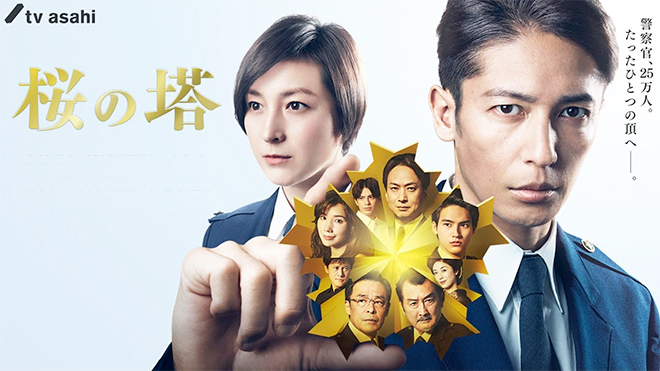 Story
In 2016, members of the public were taken hostage in a robbery of a bank in Tokyo. Senior detective Mizuki Sawa from the Tokyo Metropolitan Police Department’s First Investigation Division leads Togashi Asuma and other subordinates over and surrounds the scene. Sendo Taizen, the head of criminal investigations, requests for the deployment of the special assault team which belongs to the Security Department. However, Sendo is fighting with Gondo Hideo, the head of security, and Yoshinaga Haruki, the head of police affairs, to be the next police commissioner. The discussion which is rife with each man’s ulterior motives breaks down. While this is going on, the masked criminals shoot at a hostage and successfully flee from the rear entrance. Sawa does not know the details of the discussion between the men but she is furious that they could not prevent an incident that was clearly preventable. However, Kamijo Ren, a director of the Criminal Investigation Liaison Division who has outstanding profiling ability, is extremely calm. Not only does he present a watertight theory to explain why the special assault team was not activated, he also provides clues to identify the criminals. Meanwhile, Sendo removes Sakuma Yoshitaka, the head of the Criminal Investigation Liaison Division who is in charge of the investigation and also his daughter Yua’s fiance, for some reason and promotes Ren to fill in. Ren has his sights set on heading the police force by becoming the police chief someday. He believes topping the faction that he belongs to is the shortcut to fulfilling his aspiration. He is driven by ambition and has no qualms carrying out work, no matter how dirty it is. His childhood friend Mizuki Sawa, a senior detective in the First Investigation Division, often opposes his attitude and mindset as a detective but is the only one who knows about his past.

Characters
Tamaki Hiroshi as Kamijo Ren
A director of the Tokyo Metropolitan Police Department’s Criminal Investigation Liaison Division. He is an ambitious man and soon has his eye on becoming the police commissioner. He has great profiling skills and is good at reading people. He rarely laughs and is even curt to his boss but he is valued as someone very useful His father Hayato was a former police officer. In fact, an incident that he experienced in his childhood is the cause of his burning ambition … …

Hirosue Ryoko as Mizuki Sawa
A senior detective with the Tokyo Metropolitan Police Department’s First Investigation Division. Kamijo Ren’s childhood friend. She understands him well. She is bright, caring and behaves like an older sister. She has a strong sense of justice and detests crooked things. She respects Ren’s father as a police officer. Although she is often at odds with Ren over his attitude and mindset as a detective, she actually worries about him more than anyone else.

Okada Kenshi as Togashi Asuma
A detective with the Tokyo Metropolitan Police Department’s First Investigation Division. An oddball who wanted to join the First Investigation Division even though he topped the National Police Academy. He belongs to Mizuki Sawa’s team. Even though he is her subordinate, he secretly likes her. Despite his youth, his competence gradually became apparent over time and he eventually caught the eye of Kamijo Ren … …

Naka Riisa as Sendo Yua
The daughter of Sendo Taizen, who is the Tokyo Metropolitan Police Department’s head of criminal investigations. She is a beauty and was showered excessive love by her parents when she grew up. Even though she landed a job, she immediately quit and got engaged to Sakuma Yoshitaka, the head of the Criminal Investigation Liaison Division who was introduced by her father. A free-spirited young lady who feels dissatisfied with daily life, she has a jealous streak, is very possessive and must get what she wants. She finds Kamijo Ren charming and gradually starts to cling to him.

Danta Yasunori as Aramaki Takehiko
The commissioner of the Tokyo Metropolitan Police Department who is ruthless to people who defy him. A cunning man who is tolerant of the individualistic subordinates under his command. He is wary of the maverick Sendo Taizen, who heads criminal investigations and belongs to the outsider faction.

Mitsuishi Ken as Yoshinaga Haruki
The Tokyo Metropolitan Police Department’s head of police affairs. A powerful member of the Todai faction which brings graduates of Tokyo University together, he is fighting with Sendo for the position of police chief. He treats his rival Sendo Taizen as an enemy and clashes with him at every turn.

Yoshida Kotaro as Gondo Hideo
The Tokyo Metropolitan Police Department’s head of security. He is Sendo Taizen’s rival. A powerful member of the Satsuma faction which brings together those who are natives of Satsuma, he is fighting with Sendo for the position of police chief. While he can be compassionate, he also has an eagle eye.

Shiina Kippei as Sendo Taizen
The Tokyo Metropolitan Police Department’s head of criminal investigations. Although he is an outsider who graduated from a regional university, he aims to become the next police chief with his charisma and ability to take action. He has many enemies in the police force because he is uncompromising and loves to win. On the other hand, he is a friendly and humorous man who is impossible to hate. In his younger days, he was Kamijo Ren’s father’s colleague in the First Investigations Division.

This blog contains information and musings on current and upcoming Japanese dramas but is not intended to be comprehensive.
View all posts by jadefrost →
This entry was posted in Spring 2021 Dramas, TV Asahi and tagged Hirosue Ryoko, Mitsuishi Ken, Naka Riisa, Sakura no Tou, Shiina Kippei, Tamaki Hiroshi, Yoshida Kotaro. Bookmark the permalink.

1 Response to Sakura no Tou