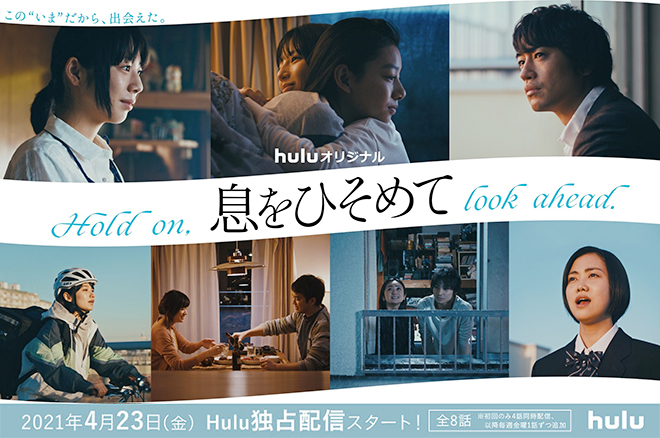 Story
The Tama River flows along the border of Tokyo and Kanagawa into Tokyo Bay. Near the river bank boasting rich nature, there are people playing sports, couples leaning on each other, students practicing singing and people riding bicycles. But the COVID-19 outbreak in 2020 brought some changes to their everyday life. Relying on the tastes in her memories, Masuda Hitomi, who resigned from a consulting firm, reopens her late grandpa’s old eatery. But the number of customers sharply decreased in the spring of 2020. Just as she thinks about closing the eatery, a high school teacher called Mizutani Mitsuo begins to frequent the shop and always orders bottled beer and “juiced liver with Chinese chives” which were popular in her grandpa’s generation. In the late autumn of 2021, Mitsuo proposes to organise a concert by the chorus club at the bank of the Tama River. As he listens to the clear singing voices, he finds…

Episode 1: Hito mo Basho mo Subete wa Nakunaru
Synopsis: Masuda Hitomi (Kaho) is serious to a fault. This caused her to develop a panic disorder due to the punishing work at the foreign consulting firm where she worked, and she quit her job at the age of 29. After recovering her spirits several months later, she and her older sister visit an old eatery Masudaya. Masudaya was left to them by their grandfather, who passed away two years ago. Hearing that it will be demolished and converted into a carpark if there are no tenants, Hitomi decides to take over the eatery. During her grandfather’s era, the eatery’s main customers were men who worked at the factories nearby. But her five-grain rice plate proves popular with the health-conscious and she starts seeing housewives who live in the neighbourhood. However, the number of customers drops sharply as a result of COVID-19. The uncertainty about the future makes her start fretting whether she should close the eatery. One night, Mizutani Mitsuo (Saito Takumi) drops into Masudaya. He orders a dish from the popular menu during her grandfather’s time, as well as a bottle of beer.
Cast: Kaho, Nakamura Eriko, Saito Takumi

Episode 2: Kaeritai Basho ga Zutto Nakatta
Synopsis: Takaoka Nanami (Ishii Anna) came to Tokyo from Fukushima Prefecture to learn animal husbandry at an agricultural university and has been living in a dorm. She is now a third-year student. Lessons are all conducted remotely due to the pandemic while hands-on practical work has been halted. Although many students in the dorm have returned to their parents, Nanami chooses to remain as she would feel out of place at home since her mother has remarried. Hachimura Yohei (Hagiwara Riku), a student of the same age who likes her, has also stayed behind at the dorm. Even though he wants to see his beloved grandmother who lives with his parents, precautions have to be taken against infecting her. Now that the university campus is out of bounds, Nanami has too much free time on her hands. She is at the river bank one day, when a young lady Tsutsui Suzune (Nagasawa Itsuki) calls out to her. Nanami is surprised by Suzune who looks like a grown-up but is still a third-year junior high school student. Suzune does not want to go home because her parents are not on good terms, and has been moving from one friend’s house to another. Feeling concern for Suzune, Nanami stealthily brings her back to the dorm.
Cast: Ishii Anna, Hagiwara Riku, Nagasawa Itsuki

Episode 3: Kimi ga Satte, Sekai wa Samagawarishita
Synopsis: 24-year-old Miyashita Shinpei (Murakami Nijiro) lives in an old apartment near a railway line. After he came to Tokyo from Kita Kyushu in Fukuoka Prefecture, he worked part-time at many places and is currently doing garbage collection. The hurt from being dumped by Kotoha (Yokota Mayu), a fourth-year university student whom he dated for almost three years, has still not healed even after three months. Shinpei has a dysfunctional family and he dropped out of high school due to an assault case. He has an inferiority complex over his educational qualifications and upbringing. Kotoha had also grown fed up with his servile behaviour. Shinpei gets to know a woman called Kotoko through a matchmaking app and they arrange to meet in front of a train station. The woman who shows up at their meeting place is Matsuzaki Kimi (Adachi Yumi). She claims to be 32 even though she is actually 36 years old. Although she is beautiful and looks well-off, Kimi somehow cuts a solitary figure and has faint scars on her wrists. The two of them get intimate without knowing each other’s real name or background, but … …
Cast: Murakami Nijiro, Adachi Yumi, Yokota Mayu

Episode 4: Kono Machi no Koto ga Suki Janakatta
Synopsis: Misumi Yuka (Makita Aju) has been living with her father Masato (Mitsuishi Ken) ever since her mother died of an illness when she was in the first year of high school. She is supposed to leave the housing complex along the Tama River where she was born and raised, to attend an arts college in Kanazawa City in Ishikawa Prefecture from April. However, classes have been pushed back due to the pandemic outbreak and she is left hanging in limbo. Her father who works for a component manufacturer has to work remotely from home. Feeling suffocated, Yuka decides to start working as an Uber Eats delivery partner in a bid to kill time until university classes start. After considering how she can get the deliveries done without a hitch, she sticks a map of town on the wall of her bedroom. Then she proceeds to write about things to pay attention for deliveries, daily discoveries and incidents regarding the town and people on sticky notes and paste them on the map. As the number of sticky notes on the map grow, Yuka starts to realise the charm of the town that she had not quite liked all this while, and starts to uncover forgotten memories … …
Cast: Makita Aju, Mitsuishi Ken

Episode 5 & 6: Tamani Tooku Kanjiru, Kimi no Koto ga & Anata no Hayasa ni Tsuite Ikenai Koto ga Aru
Synopsis: 34-year-old Towada Jun (Miura Takahiro) and Satsuki (Takiuchi Kumi) met in university and both of them found jobs at a publishing company after graduation. They got married at the age of 28 and have been living together in an apartment with a view of Tama River from the verandah. Satsuki was assigned to a department that creates a magazine for teens but she decided that she could not do the literary work she wanted and resigned. Right after she turned to freelancing, the pandemic hit. She has no jobs and gets slightly jittery. On the other hand, Jun is an editor of business books and has been busy working remotely. The couple who are of the same age and work in the same industry had shared the housework equally. However, the pandemic upends their balance as they spend more time together. Even though they care for each other, they gradually start to grow apart.
Cast: Miura Takahiro, Takiuchi Kumi

Episode 7: Dare no Tame ni Utau no?
Synopsis: Suwa Tamami (Ogawa Miyu) is a third-year high school student who belongs to the choir. Ever since she started singing at the age of 6, she has been constantly asked what and whom she sings for. Although she responds appropriately on each occasion, she has yet to find an answer that she can give with conviction. As news reports about COVID-19 start to grow, Tamami is seized with anxiety about the uncertain future. When the choir members are told by Mizutani Mitsuo (Saito Takumi), the teacher in charge, that the choral competition has been called off, they choke with tears and want to sing for the last time. He holds back because of potential infection by droplets. The final competition of their school life is gone and the choir cannot continue with its activities. Having lost her purpose and place for singing, Tamami continues to ask herself each day why she sings … …
Cast: Ogawa Miyu, Kyoka, Maeda Oshiro, Osaki Ichika, Yoshida Daihachi, Moriguchi Yoko, Saito Takumi

Episode 8: Kono Mado kara Mieru Keshiki ga, Boku no Sekai da
Synopsis: In November 2021, life gradually begins to return to daily routine with the pandemic showing signs of ending. Mizutani Mitsuo (Saito Takumi), the teacher in charge of the choir, gazes at the river bank from the music room’s window. He and Hitomi (Kaho) of Masudaya have continued their comfortable relationship as eatery owner and regular customer even after that. Mitsuo has always felt a thin film between other people and even himself. At some point, this film became so thick that he could not cry even when his mother died of terminal cancer in the spring of 2020. One day, Mitsuo proposes that the current choir members join with last year’s third-year students to sing the songs intended for the choral competition that was cancelled. Tsutsui Suzune (Nagasawa Itsuki) is there. Mion (Kyoka) and Shota (Maeda Oushiro), who have become university students, are overjoyed to be reunited. But Tamami (Ogawa Miyu) is not present as she is currently learning music therapy at a Finnish university. Mitsuo suggests holding a concert on the banks of the Tama River. As he listens to their clear singing voices, he finds … …
Cast: Saito Takumi, Kyoka, Maeda Oushiro, Osaki Ichika, Nagasawa Itsuki, Kaho

This blog contains information and musings on current and upcoming Japanese dramas but is not intended to be comprehensive.
View all posts by jadefrost →
This entry was posted in Hulu, Spring 2021 Dramas and tagged Adachi Yumi, Iki o Hisomete, Kaho, Makita Aju, Mitsuishi Ken. Bookmark the permalink.