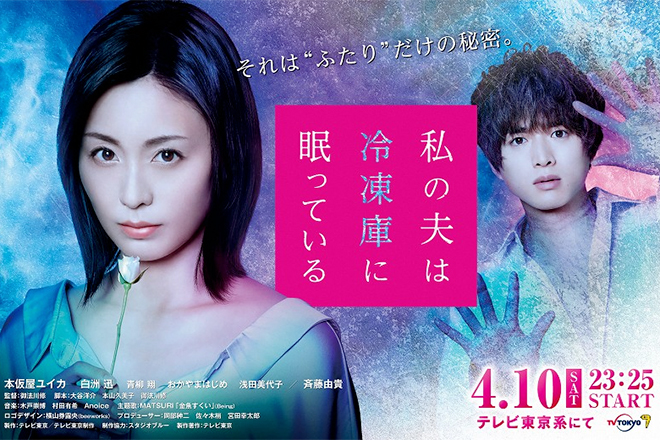 Story
Kisaragi Natsuna has been living quietly in the suburbs in an old Western-style detached house and makes a living from an online business dealing in imported furniture and general goods. She got acquainted with her fiance Sato Ryo by chance several months ago, and they started living together. However, this happiness is short-lived. Ryo’s demeanour completely changes over time and he starts getting violent with her. Natsuna tolerates it but eventually snaps and ends up impulsively strangling him when he is intoxicated one day. After that, she hides his dead body in the storeroom’s old freezer. But just when she thinks she has been liberated, Ryo appears like usual the next morning and greets her even though he should be lying inside the freezer. What exactly happened?

Characters
Motokariya Yuika as Kisaragi Natsuna
A dark woman who ends up killing Sato Ryo, her fiance whom she started living with after making his acquaintance a few months earlier. on the spur of the moment after she is no longer able to tolerate his violence.

Shirasu Jin as Sato Ryo
Kisaragi Natsuna’s fiance. He appears in front of her again although he was supposed to have been killed.

Aoyagi Sho as Karasawa Kosuke
Sato Ryo’s boss at a company that handles property transactions. He is suspicious of Kisaragi Natsuna.

Okayama Hajime as Akutsu Makoto
A private investigator who was hired by Kisaragi Natsuna’s mother to investigate her daughter’s fiance Sato Ryo.

Saito Yuki as Kujaku
A mystery writer who lives across from Kisaragi Natsuna’s house. She seems to be a wealthy woman who sees through everything.

This blog contains information and musings on current and upcoming Japanese dramas but is not intended to be comprehensive.
View all posts by jadefrost →
This entry was posted in Spring 2021 Dramas, TV Tokyo and tagged Motokariya Yuika, Watashi no Otto wa Reitoko ni Nemutteiru. Bookmark the permalink.