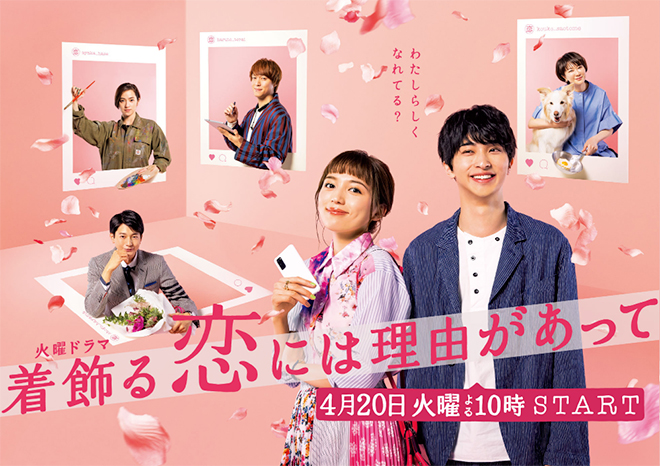 Story
26-year-old Mashiba Kurumi is a publicist at el Arco Iris, an interior goods company that is popular with young people. She has even earned the respect of her CEO Hayama Shogo who established the company. Kurumi works hard every day, overstretching herself for the sake of the company, its fans and Hayama whom she secretly likes. However, she is so busy that she forgets to renew the contract for her apartment and ends up getting kicked out. Fortunately, Kurumi is helped by Saotome Koko, a popular 50-year-old food stylist whom she got friendly with while working part-time at a cafe. She arrives at Koko’s apartment in Omotesando expecting to lead the high life in the fancy condominium of her only female friend but finds out that she has to share the place with Koko and three strangers. They are 26-year-old Fujino Shun, a minimalist and a chef who runs a bar from his food truck only whenever he likes; 36-year-old Terai Haruto, an online counsellor who is Shun’s second cousin; and 33-year-old Hase Ayaka, an aspiring artist who does part-time deliveries for an upscale supermarket nearby. There are frequent problems due to the different mindsets and preferences of the five roommates. While Kurumi has always been conscious of other people’s opinions, her values begin to change as she spends time with the carefree Shun who stays true to himself, and the two of them rapidly grow close … …

Characters
Kawaguchi Haruna as Mashiba Kurumi
An employee of interior goods company el Arco Iris’ Public Relations Division. After graduating from a design school, she joined the company of her dreams, el Arco Iris. She is in charge of creating press releases and e-mail newsletters, handling media interviews, advertising and promotions. Wanting to contribute to the company and promote it, she launched a social media account which she has updated thrice every single day over the last five years, and becomes an influencer in her own right with nearly 100,000 followers. She bites off more than she can chew for the sake of the company, the followers, and for her CEO Hayama Shogo, whom she has liked for seven years.

Yokohama Ryusei as Fujino Shun
The owner of Fuji Bar, a food truck business with one special winning curry dish. He runs the bar whenever he likes. There are rainy days when he does not work. If he can earn 100,000 yen in net profit, he will not operate. He takes a break at night and on weekends, and makes a clear distinction between the time he is on and off. There are many things that he is very particular about and he will only cherish these things. He is a minimalist who seeks a simple life and does as he pleases.

Matsuyama Ryuhei as Terai Haruto
Fujino Shun’s second cousin. He is an online counsellor who provides consultation round-the-clock. After graduating from university, he work as a physician at a well-known Tokyo hospital. But he felt stifled and resigned at the age of 32 because he wanted to have a deeper understanding of his patients and to take his time. He started a counselling service online for people suffering stress.

Nakamura Anne as Hase Ayaka
An aspiring artist who creates paintings and works of modern art while doing part-time deliveries for a high-end supermarket in the neighbourhood. Putting on her own solo exhibitions and publishing her works on online art galleries are not enough to make a living. Saotome Koko, whom she got acquainted with through food deliveries, knows she is having difficulty earning a livelihood and invites her to share her apartment. She gets engrossed in her work to the point of forgetting to eat and sleep.

Mukai Osamu as Hayama Shogo
The President and CEO of el Arco Iris. He became interested in interior goods unique to Scandinavia when he went to Sweden as an exchange student. After he graduated from university, he set up el Arco Iris with Hosogai Yuichi. He developed a mail order business without any physical stores and also made his debut in the media as a young CEO. He is the type who immediately acts on what he wants. He got married when he was 30 and divorced in about three years.

Natsukawa Yui as Saotome Koko
The apartment owner. She is Mashiba Kurumi’s only female friend and a successful food stylist. Besides her culinary skills, she also creates restaurant and in-flight meals and even displays her skills on the set for commercials. She got a divorce one year ago and decided to regain her life by going to Lotus Island for language studies for a year. While studying abroad, she hit on the idea of leasing her rooms to young people at a bargain price.

This blog contains information and musings on current and upcoming Japanese dramas but is not intended to be comprehensive.
View all posts by jadefrost →
This entry was posted in Spring 2021 Dramas, TBS/MBS and tagged Kawaguchi Haruna, Kikazaru Koi ni wa Riyuu ga Atte, Mukai Osamu, Natsukawa Yui. Bookmark the permalink.