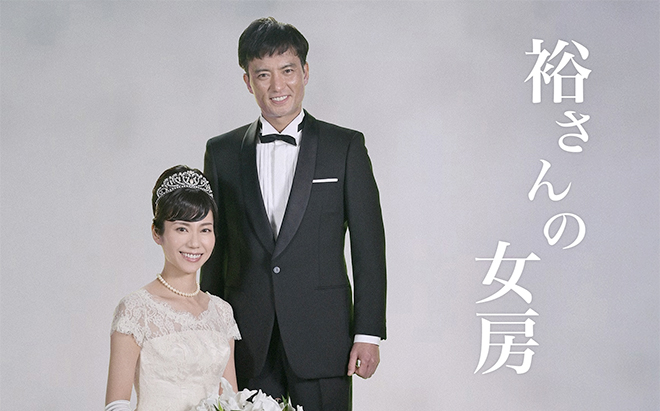 Date: From 9.00 p.m., 17 April 2021
Original Work: Yu-san no Nyobo ~ Mouhitori no Ishihara Yujiro by Muramatsu Tomomi
Scriptwriter: Kamiyama Yumiko (Petero no Souretsu, Na mo Naki Doku, Tsumi to Batsu)
Director: Mayuzumi Rintaro
Cast: Matsushita Nao, Tokushige Satoshi, Aso Yumi, Asada Miyoko, Ishihara Yoshizumi, Nagai Masaru, Omi Toshinori, Kato Kazuko, Takashima Masahiro
Synopsis: While co-starring in a number of films with Ishihara Yujiro (Tokushige Satoshi), top actress Kitahara Mie (Matsushita Nao) got to know the true nature of this man who was still a university student. They eloped overseas and wedded. She chose to give up her career as a film actress in order to support his dream as his wife Ishihara Makiko. However, Yujiro kept coming home in the morning after staying out all night. The only time when she felt they were husband and wife was when he was taken to hospital for a bone fracture. At that time, Yujiro decided to set up Ishihara Promotion and make his own films. She lovingly stood by her husband who was always miles ahead, letting him go after his dream and shine as superstar Ishihara Yujiro even though they had to brave successive trials and tribulations from the hardships of film production, mounting debt and his battle with illness which eventually claimed his life.
Website: www.nhk.jp/p/ts/JVMV41W9P7

This blog contains information and musings on current and upcoming Japanese dramas but is not intended to be comprehensive.
View all posts by jadefrost →
This entry was posted in NHK, Spring 2021 Drama Specials and tagged Aso Yumi, Omi Toshinori, Yu-san no Nyobo. Bookmark the permalink.