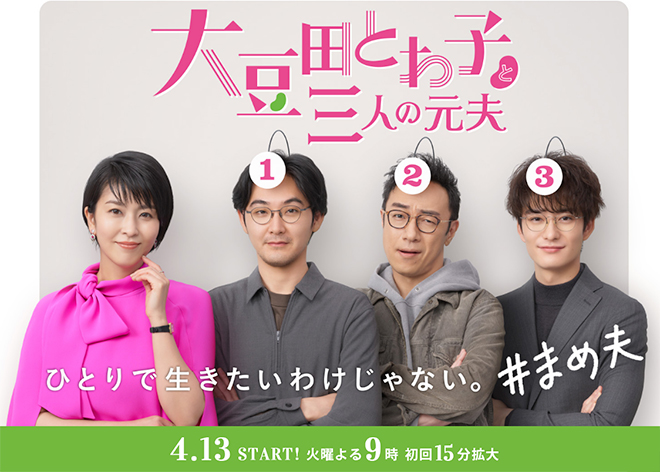 Story
Omameda Towako has just become the CEO of Shirokuma Housing, a home builder. She is thrice divorced and lives with her daughter Uta whom she had with her first husband Tanaka Hassaku. One day, when she tries to access the computer belonging to her mother who passed away around the same time that Towako became CEO, she realises that a password has been set. It was apparently set by one of her ex-husbands. Uta urges Towako to confirm this immediately but Towako wants to avoid trouble and feels reluctant. Of her ex-husbands, she still meets Nakamura Shinshin, who was her third husband, regularly. He is a legal adviser to Shirokuma Housing and has an argumentative and cynical nature that does not fit with his handsome face. Her second husband Sato Kataro is a famous fashion photographer but is narrow-minded. And her first husband Hassaku resigned to become the owner and waiter of a restaurant. Towako decides to visit each of her exes. Confirming Towako’s password creates a connection between the three men. In addition, they are brought together in an unexpected turn of events and start talking about Towako. The ex-husbands still seem to have some feelings for Towako even though they are no longer married. Will the four of them be able to find happiness?

Characters
Matsu Takako as Omameda Towako
She is thrice divorced and has a daughter Uta who is a junior high school student. The CEO of Shirokuma Housing. She is cheerful, playful, a little impatient and feigns ignorance in some ways.

Matsuda Ryuhei as Tanaka Hassaku
Omameda Towako’s first husband, and the father of her daughter Uta. The owner and waiter of Operetta, a restaurant in Oku Shibuya, Tokyo. He is naturally popular with females because of his gentle nature and occasionally gets into trouble.

Toyoshima Hana as Omameda Uta
Omameda Towako’s daughter with her first husband Tanaka Hassaku. A third year junior high school student. She has been rebellious ever since she was born and always coolly watches her mother and the three exes.

Kakuta Akihiro as Sato Kataro
Omameda Towako’s second husband. A fashion photographer who is recognised in the industry. He is still crazy about Towako to this day but people tend to say that he is narrow-minded.

Okada Masaki as Nakamura Shinshin
Omameda Towako’s third husband. A legal adviser to Shirokuma Housing. Although he is an elite lawyer, he is an argumentative and contrary person.

Ichikawa Mikako as Watarai Kagome
Omameda Towako’s close friend. She is awkward and can never stay in her job long but she is carefree and happy. She is able to share both the good and bad just by being with Towako.

Odagiri Joe as Takanashi Hiroshi
A mysterious maths loving man whom Omameda Towako encounters at a park. He is also the person in charge of a foreign fund called Madison Partners which acquired Shirokuma Housing.

Iwamatsu Ryo as Omameda Ousuke
Omameda Towako’s father. A former lawmaker of the Upper House although he kept on losing his seat these few years and has been unemployed. Despite his quirks, he watches out for his daughter.

This blog contains information and musings on current and upcoming Japanese dramas but is not intended to be comprehensive.
View all posts by jadefrost →
This entry was posted in Fuji TV, Spring 2021 Dramas and tagged Matsu Takako, Matsuda Ryuhei, Odagiri Joe, Okada Masaki, Omameda Towako to 3-nin no Moto Otto, Sakamoto Yuji. Bookmark the permalink.

1 Response to Omameda Towako to 3-nin no Moto Otto