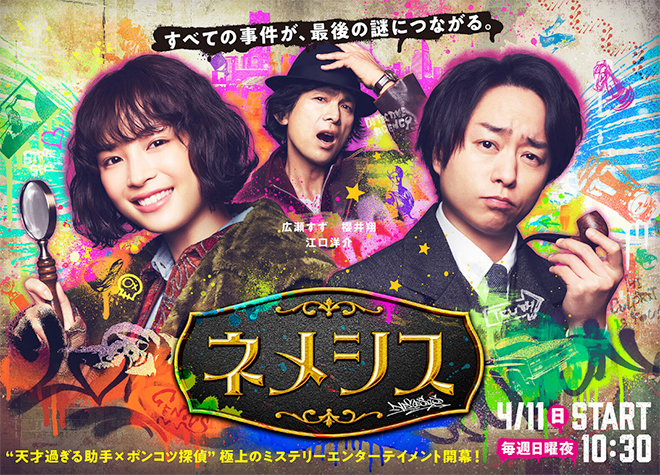 Story
Kazama Naoki is a crack detective at the private investigation firm Nemesis in Yokohama. He has a brilliant mind like Sherlock Holmes and solves every difficult case. But the true detective is actually his talented assistant Mikami Anna. The two of them, who make quite an odd duo, take on complicated cases. Their goal is to find Anna’s father Hajime, a scientist who went missing all of a sudden. Together with Kurita Kazuaki, the owner of Nemesis who is Hajime’s good friend, Anna and Kazama seek clues to his disappearance. Their first client is the beautiful doctor Uehara Kiiko. She received an unsettling letter threatening her employer, the super-rich Shibusawa Hokiichi who is the Don Juan of Isogo. If he proceeds with plans to celebrate his 80th birthday party, his life will be in danger. Shibusawa is found dead in his own room at his massive mansion on the day after the party. As Anna and Kazama take on one baffling trick-ridden case after another, they seem to find a clue leading to her father each time that brings a new riddle to light. Cases that seemed unrelated turn out to be connected and reveal a shocking truth. They discover that the key to solving the mystery of his disappearance is a 20-year-old incident that was hushed up. What Anna does not yet realise is that both Kazama and Kurita are connected to this incident … …

Characters
Sakurai Sho as Kazama Naoki
The self-proclaimed genius detective at Nemesis. He is actually quite incompetent but popular with his peers. He investigates the disappearance of Mikami Anna’s father Hajime together with her.

Hirose Suzu as Mikami Anna
Kazama Naoki’s assistant at Nemesis. She has a knack for figuring things out through flashes of insight but is reckless. She seeks the help of Kazama Naoki and her father’s good friend Kurita Kazuaki and tries to find hints connected to her father Hajime’s sudden disappearance.

Eguchi Yosuke as Kurita Kazuaki
The handsome middle-aged CEO of private investigation firm Nemesis and a veteran with 30 years of experience in detective work. He is an unconventional man who lives an unfettered life. A close friend of Mikami Anna’s missing father Hajime. He knows about the case that was hushed up 20 years ago which will become the key to solve the mystery of his friend’s disappearance.

Nakamura Toru as Mikami Hajime
Mikami Anna’s father. A scientist who has been close friends with Kurita Kazuaki since long ago. He lived together with Anna but suddenly went missing.