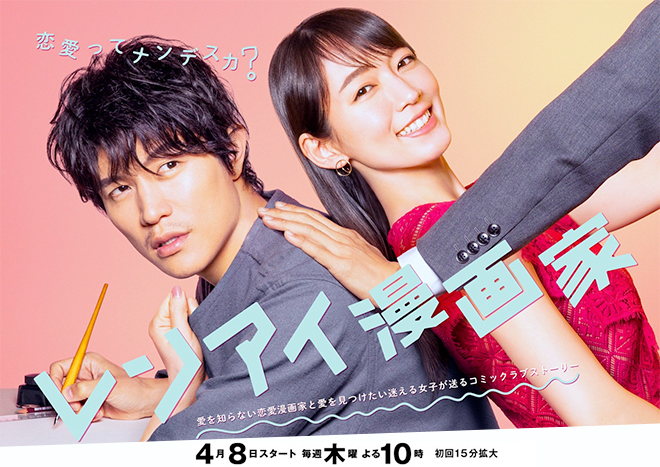 Story
A funeral is taking place at Akari Funeral Services for Karibe Jun who died at a young age. Jun was the first love of Kuon Aiko who works for the funeral home. She is instructed by a senior colleague to take care of Jun’s son Ren as the boy does not have a mother too and is suddenly all alone in this world. When Aiko greets Ren, a big man wearing a black parka with a hood covering his head arrives. Ren tells Aiko that he is his uncle, his father’s older brother Seiichiro. The relatives are astonished by Seiichiro’s appearance which is inappropriate for the occasion and wonder whether Ren should be brought up by this eccentric man. When Aiko hears their comments, she discovers that Ren has gone missing. She finds the boy at a high place and sees Jun in him. As she tells Ren about dating his father during their high school days after confessing her feelings to him a number of times, she cannot help but cry. Ren tries to toss his handkerchief over to Aiko but it is caught by Seiichiro who showed up unnoticed. Seiichiro declares to a shocked Aiko, “Let’s have a romance” and steps closer to her. She instinctively shoves him away. Seiichiro hits his head and crouches. But Aiko gets fired from the company for injuring him and she has difficulty finding a job. When she returns to her apartment one day, there is a suspicious-looking man who introduces himself as Kogo Tatsuya who works for a publishing company. He has a job for Aiko and takes her to a mansion where she is welcome by Seiichiro of all people. Seiichiro has been hiding his true identity and in fact the popular manga artist of the big hit manga series Ginga Tenshi. Aiko is asked to take on a fake romance mission for material for his manga. Aiko develops a tumultuous relationship of tragicomic starts and stops with Seiichiro and they cross swords but … …

Characters
Suzuki Ryohei/Matsudai Koya as Karibe Seiichiro
A talented manga artist of the big hit manga series Ginga Tenshi in Shojo Morning. He is not good at socialising, barely goes out and cannot understand regular people’s train of thought. He continues to work alone on Ginga Tenshi without any assistants. He has never made an appearance, hiding his identity behind a female pen name Karibe Maria, and his private life is shrouded in mystery. One day, he winds up having to adopt his younger brother’s son Ren which throws his solitary life into disarray … …

Yoshioka Riho as Kuon Aiko
A young woman around 30 who has no dreams, boyfriend and money. As she is trusting and has a sweet disposition, she has often been cheated. She dreams that her life partner will come along some day but has also had bad luck with men and has been examining her life as she approaches 30. She works for a funeral home and at the funeral for her first love Karibe Jun, she has a startling encounter with his older brother Seiichiro.

Maeda Gordon as Nikaido Togo
An employee who is the acting manager of 2 Story Cafe, a cafe and bar that Kuon Aiko frequents. As he is kind-hearted and good at listening, he listens to Aiko’s struggles with work and romance. He has a carefree nature and a truly popular guy who is impossible to hate. He is a sensitive soul, always has a positive mindset and has been exploring various possibilities for the future. His nonchalant manner foreshadows an unexpected development in the story … …

Shiraishi Shunya/Okudaira Daiken as Karibe Jun
Karibe Seiichiro’s younger brother and Kuon Aiko’s first love. A single father who was raising his son Ren on his own. Although he understood Seiichiro the best, they were complete opposites in their personalities. He is sociable and extremely fond of women but he is a lovable character.

Ryusei Ryo as Hayase Tsuyoshi
A salaryman working for a top company and former rugby player. He is sociable, cheerful and has a big heart. He becomes Kuon Aiko’s first partner in her fake romance mission. He meets Aiko, who is dressed up as an office lady working in Marunouchi, by fate at a cafe early in the morning, but … …

Kinami Haruka as Kinjo Karen
A popular manga artist with a unique fashion sense. Her work is being serialised in Shojo Morning. Although she is Karibe Maria’s junior, she is keenly aware that she is the strongest rival for the top position in readers’ surveys and has an extraordinary interest in her true identity. As a person of intense emotions, her feelings for Karibe fire her up but she is also a hard worker who constantly gathers and incorporates the latest trends and information. All her works are digital.

Kataoka Ainosuke as Kogo Tatsuya
The editor in charge of Karibe Seiichiro. He was the first to recognise Seiichiro’s talent and cultivated him into the popular manga artist Karibe Maria. He has been supporting Seiichiro for a long time and is the only person in Shojo Morning’s editorial department who is able to contact him. He used to belong to a sports magazine because he was a former rugby player but he has been put in charge of manga for females for some reason. He knows little about romancing nowadays and sometimes his advice based on his own experience and instincts are incomprehensible and also go nowhere.

This blog contains information and musings on current and upcoming Japanese dramas but is not intended to be comprehensive.
View all posts by jadefrost →
This entry was posted in Fuji TV, Spring 2021 Dramas and tagged Kataoka Ainosuke, Kinami Haruka, Renai Mangaka, Ryusei Ryo, Suzuki Ryohei. Bookmark the permalink.