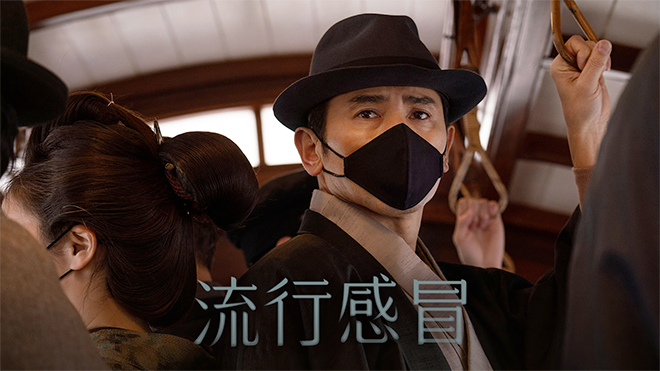 Date: From 9.00 p.m., 10 April 2021
Original Work: Ryuukou Kanbou by Shiga Naoya
Scriptwriter: Osada Ikue (Sugu Shinun Dakara, Retake)
Director: Yanagawa Tsuyoshi
Cast: Motoki Masahiro, Ando Sakura, Nakano Taiga, Furukawa Kotone, Matsuda Ruka, Ishibashi Renji
Synopsis: The novelist Shiga Naoya (Motoki Masahiro) lives with his wife Haruko (Ando Sakura) and their 4-year-old daughter Saeko. He is paranoid about Saeko’s health, making her wear heavy clothes even in summer in order to prevent her from catching a cold. He also absolutely will not allow her to eat food that people try to feed her outside as this could cause a stomachache. Their child before Saeko died due to an epidemic, and he believes thorough enforcement is a natural consequence. In the autumn of 1918, the Spanish flu that would hold the world in a grip of terror reaches Japan. As the number of infected people grows, Shiga starts to suspect their servant Ishi (Furukawa Kotone) might have gone to watch a travelling entertainment troupe’s performance which drew a great number of villagers. It is something Ishi is likely to do since she usually appears a little dim and is frequently careless. But when Shiga questions her, she says that she did not go. However, she makes him have misgivings on a regular basis and he decides to take this opportunity to make her quit. An uproar ensues. His wife Haruko eyes him coldly and says they will look bad for using this reason to get rid of her. Shiga feels that he has become a tyrant and refrains from kicking her out but he loses all reason and faith in humanity amid the pandemic … …
Website: www.nhk.jp/p/ts/DGZ2952N76
Twitter: twitter.com/nhk_dramas

This blog contains information and musings on current and upcoming Japanese dramas but is not intended to be comprehensive.
View all posts by jadefrost →
This entry was posted in NHK, Spring 2021 Drama Specials and tagged Ando Sakura, Ishibashi Renji, Motoki Masahiro, Ryuukou Kanbou. Bookmark the permalink.