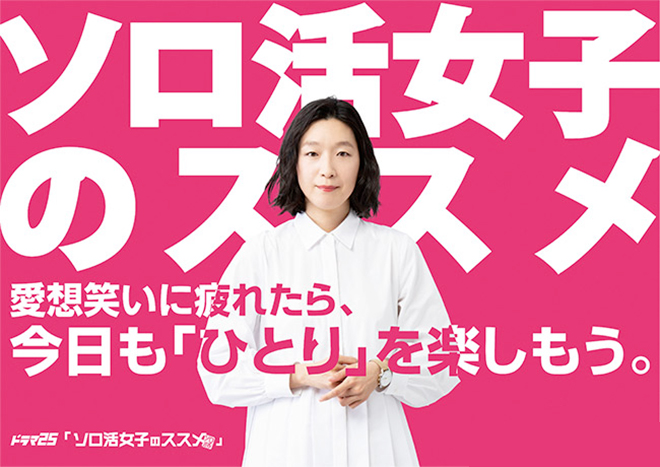 Story
Sotome Megumi works at the editorial department of the publishing company Digest Publishing as a contract employee. She is invited by her colleagues to a welcome party after work. However, Megumi turns them down and quickly gets off work. She is in such a rush as she is heading somewhere in search of a new solo activity where she can pamper herself. In fact, a rapidly growing number of women are attracted to the freedom and ease of being on their own, enjoying a luxurious time by themselves at a place and time that they like. Megumi delights in activities such as dining solo at restaurants, having her own girl’s night out, and staying alone at a love motel. First of all, she heads to a barbecue meat joint. She is brought to her seat and while she is looking at the menu, the actions of three groups of young people in the restaurant remind her of an incident several years ago. Her main solo activity for the day is taking a limousine ride and she dresses herself up for a party … …

This blog contains information and musings on current and upcoming Japanese dramas but is not intended to be comprehensive.
View all posts by jadefrost →
This entry was posted in Spring 2021 Dramas, TV Tokyo and tagged Eguchi Noriko, Solo Katsu Joshi no Susume Series. Bookmark the permalink.