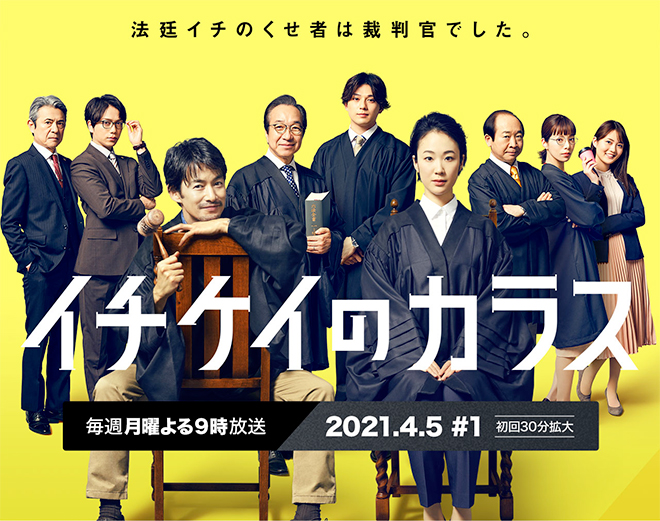 Story
Iruma Michio is a devil-may-care, unorthodox criminal judge at the Tokyo District Court’s First Criminal Investigations Department. He used to be a lawyer and was deeply involved in a past case that was behind his transformation into a judge. Feared by lawyers as well as prosecutors because he is not bound by obligations, prejudices and preconceptions and has an inquiring mind, Iruma personally inspects crime scenes to prevent a miscarriage of justice and bring the truth to light. He is watched over by Komazawa Yoshio, the legendary veteran judge involved in 30 not-guilty rulings in a court system that is said to have a conviction rate of 99%, and court clerk Ishikura Bunta, a self-professed fan. On the other hand, Sakama Chizuru, who became an assistant judge at a young age, is the complete opposite of him. A graduate of Tokyo University’s Faculty of Law, she is an elite among elites. Chizuru has been transferred to the department to reform it due to the unbelievably small number of cases that have been closed. This is the equivalent of a company in the red to the extent of going bankrupt. As someone who takes great pride in maintaining public order by handling cases accurately and promptly, Chizuru cannot understand Iruma’s style which frustrates her to no end. Komazawa immediately instructs the two of them to team up for a case where Iruma will be the presiding judge in a three-judge panel. A university student Nagaoka Makoto has been indicted for causing injuries to the Diet member Enami Kazuhiko that will take one month to heal completely. Makoto is actually the son of Enami’s secretary Yoichiro. Yoichiro had tried to take his own life by jumping in front of an oncoming train just as the Tokyo District Public Prosecutors Office started to keep an eye on him on allegations of illegal donations two months ago. At the first trial, Ide Iori and his superior Jojima Reiji appear for the prosecution. Makoto asserts that it was Enami who hit his father first and his father did not commit suicide. Iruma surprises Chizuru, Ide and the rest by invoking his right to investigate and carry out an on-site inspection, deeming it necessary to verify the truth behind Yoichiro’s death.

Characters
Takenouchi Yutaka as Iruma Michio
A maverick criminal judge who carries out on-site investigations of crime scenes on his own to bring the truth to light and ensure there are no wrong convictions. Although he sports a beard, wears casual clothes and has a laid back demeanour that is far from the image of a stuffy judge, he is feared by both lawyers and prosecutors due to his inquiring mind and the observations that he makes without constraints, prejudices and preconceptions. A criminal judge is typically put in charge of approximately 250 cases a year and one of their priorities is to handle cases quickly and efficiently. But he says he is not bothered by it and probes deeply into cases at his own pace, causing the members of the First Criminal Investigations Department to clutch at their heads. He was actually a former lawyer and his transformation into a judge is seems to be closely connected to a case in the past … …

Kuroki Haru as Sakama Chizuru
A judge who is the exact opposite of Iruma Michio and an outstanding woman who became an assistant judge at a young age in the male-dominated world of the judiciary. A graduate of Tokyo University’s Faculty of Law, she is an elite among elites. She is a strait-laced person, has no sense of humour and takes great pride in “judges maintaining public order by handling cases accurately and promptly”. She is transferred to First Criminal Investigations Department to reform it. As someone who seeks speed and efficiency, she is unable to understand Iruma Michio’s style of work at all and she gets increasingly irritated with him for conducting on-site inspections numerous times and delving carefully into the truth of cases. When she realises that Iruma believes in treating a case as an individual’s life, she is faced with the question, “What can a judge do aside from issuing a ruling?”

Arata Mackenyu as Ishikura Bunta
A young court clerk who supports the judges through the appropriate and prompt management of trials. He brightens the place with his friendly personality and charming smile. He professes to be Iruma’s fan even before he became a clerk. He firmly supports the free-spirited Iruma while acting as a mediator for Iruma and the members of the First Criminal Investigations Department who are swayed by him. He likes Sakama Chizuru and there are occasions where he would unconsciously follow her with his eyes and hint at it through his behaviour. Before becoming a clerk, he was a court enthusiast who had sat in on Iruma’s trials countless times, including the trial which became a catalyst for Iruma’s career change. He holds the key to the story as one of the few people who knows the true nature of the Iruma who is a man of many mysteries.

Yamazaki Ikusaburo as Ide Iori
A cool mid-career prosecutor with a strong sense of justice. He is so outstanding that he was summoned by the Special Investigations Department of the Tokyo District Public Prosecutors Office and transferred to the Tokyo District Court’s third branch to monitor the behaviour of the free-spirited Iruma Michio. He is immediately confused, astounded and swayed by Iruma’s unconventional style. But in the course of witnessing court-led on-site inspections and observing his behaviour in court, he realises Iruma’s firm convictions as a judge and comes to respect him. His mission is to win a conviction of the accused. However, it is not an easy job with the presence of Iruma. Although he is torn between his mission as a prosecutor and desire to uncover the truth with Iruma, he is trusted by judges and clerks because he is a person of integrity.

Kusakari Tamiyo as Hidaka Aki
A super elite who is one of 14 supreme court judges and the first woman to come closest to the position of chief justice of the supreme court. She was a senior instructor when Sakama Chizuru was at the Judicial Research and Training Institute and as a female judge hailing from Nagasaki Prefecture too, she cares about Chizuru. She hopes that Chizuru will eventually advance her career at the Supreme Court’s General Secretariat, which is the top of the judiciary, and sends her into the First Criminal Investigations Department to turn it around. In fact, she was the judge of the trial that led Iruma Michio to give up his lawyer’s badge. Iruma’s existence is an annoyance to her. She is wary and makes use of Chizuru to gather information related to him.

Kohinata Fumiyo as Komazawa Yoshio
The head of the Tokyo District Court’s First Criminal Investigations Department. He has been a criminal judge since his appointment more than 30 years ago. A mild-manner man who is full of humour and always has a smile. He watches over Iruma Michio and occasionally admonishes and guides Sakama Chizuru who is hostile to Michio. While he may not have luck on the career track, he is the legendary judge associated with 30 not-guilty rulings in a Japanese court system that is said to have a conviction rate of 99%. He was deeply involved to the trial of the case that led Iruma to give up his lawyer’s badge and he is also the mentor who guided Michio to become a judge. The two of them trust each other and have a strong bond.