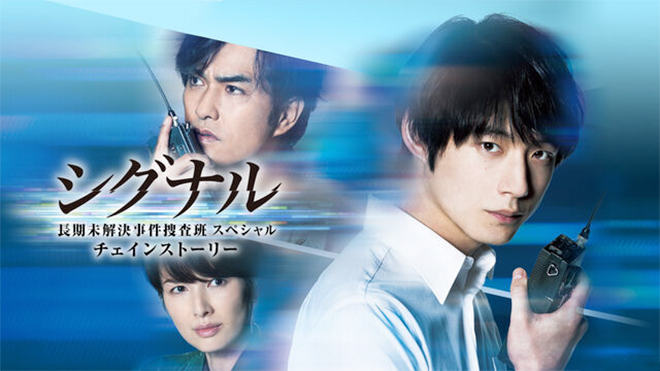 Date: From 9.30 p.m., 30 March 2021
Original Work: Signal by Kim Eun-hee
Scriptwriter: Nishi Kosuke (Signal, Zettai Seigi, Mozu Series)
Director: Suzuki Kosuke
Theme Song: Don’t Leave Me by BTS
Cast: Sakaguchi Kentaro, Kitamura Kazuki, Kichise Michiko, Kimura Yuichi, Ikeda Tetsuhiro, Aono Kaede, Aoki Munetaka, Sakurai Yuki, Furukawa Yuki, Shinohara Yukiko, Suruga Taro, Nishioka Tokuma, Sugimoto Tetta, Tanaka Tetsushi
Synopsis: Saegusa Kento (Sakaguchi Kentaro), a police officer with the Unsolved Cases Unit at Josai Police Precinct, and Oyama Takeshi (Kitamura Kazuki), a detective from Josai Police Precinct’s Criminal Investigation Division, have been able to communicate across time through an old walkie-talkie that should have been discarded. Even though the two men live in different time periods, they cooperated to solve a series of cold cases. Kento even succeeded in preventing the death of Oyama, who was once found as a skeleton, and eventually the time came for them to meet face to face in 2018. However, Oyama suddenly vanished while hospitalised and was also framed for killing Nakamoto Shinnosuke (Watabe Atsuro), the former director of the Tokyo Metropolitan Police Department who was on the run as a suspect in a murder case. Oyama still remains missing in 2020. Believing that arresting Nakamoto’s killer is the only way to save Oyama, Kento along with his partner Sakurai Misaki (Kichise Michiko) vow to catch the criminal. One day, a photographer called Takeda Hisashi (Furukawa Yuki) catches sight of his fiancee Uesugi Kurumi (Sakurai Yuki) who had taken her own life 20 years ago. He visits the Unsolved Crime Unit to ask them to investigate. According to Takeda, he was setting up his camera at a place that reminded him of happier times several days ago, and the woman on the opposite end of his lens was an older Kurumi. When he looked at the photographs that he had taken, the woman he had captured certainly bore a strong resemblance to her. If Kurumi is truly alive, then the dead body found in the reservoir 20 years ago must belong to a different person. Kento and Misaki are moved by Takeda’s feelings for his beloved whom he suddenly lost and still cannot forget to this day. They immediately launch an investigation into the case but face difficulty because her family is uncooperative for some reason. Then one night, at the moment when Kento’s watch indicates 11.23 pm, the walkie-talkie comes to life again and he connects with Oyama who is alive in 2000. Oyama offers to help after hearing the story from Kento even though he is on the run. He gets in touch with Takeda in his timeline and soon learns that Kurumi, who was a budding actress, met Ishikawa Takumi (Aoki Munetaka), the CEO of a construction company, at a party that she had visited for a part-time job.
Website: www.ktv.jp/signal
Twitter: twitter.com/signal_ktv

This blog contains information and musings on current and upcoming Japanese dramas but is not intended to be comprehensive.
View all posts by jadefrost →
This entry was posted in Fuji TV, Spring 2021 Drama Specials and tagged Aoki Munetaka, Furukawa Yuki, Kitamura Kazuki, Sakaguchi Kentaro, Sakurai Yuki, Signal Series. Bookmark the permalink.