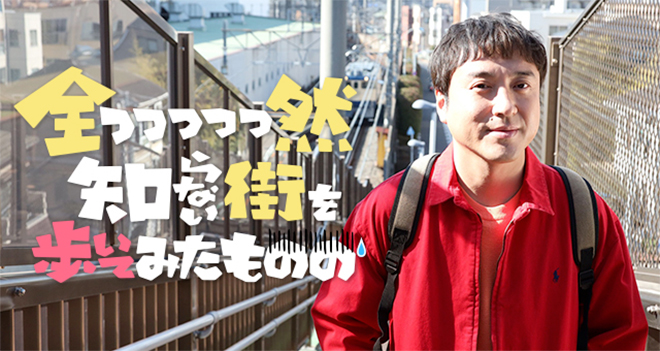 Kami Nakazato
Synopsis: Manga artist Seino Toru (Muro Tsuyoshi) lives in Tokyo’s Akabane district. He casually looks at a map which is full of towns with unfamiliar names and gets an idea. Not wanting to die without knowing the sights, people and stories that can be found in these places, he rushes off to Kami Nakazato which is nearby. Seino encounters a very quirky owner (Kuroda Fukumi) at a retro-looking place that might be a bar or a coffee shop. Moved by her menu recommendations, Seino somehow ends up talking even about his private life before hastily rushing out. He is excited to discover what seems to be traces of brick walls in the residential area. Although all the residents say that there is nothing here, Seino heads to a diner and bar that he is curious about. A regular customer (Takasugi Kou) and other people are there singing in high spirits and enjoying themselves.
Cast: Muro Tsuyoshi, Kuroda Fukumi, Takasugi Kou

Kokudo
Synopsis: Seino (Muro Tsuyoshi) takes in Kokudo station where time seems to have stopped as he heads downtown. He learns that the site of the Namamugi Incident in 1862, which triggered the Anglo-Satsuma War a year later, is actually nearby. He also visits a museum about the Namamugi Incident that was created by a local gentleman (Hiraizumi Sei). It is pitch black as if there is a power outage but the gentleman appears, wanting to talk about the incident. Seino proceeds to a ramen shop where he strangely finds Napolitan spaghetti on the menu. He tastes the dish and is impressed by the flavour. In the evening, Seino returns to Kokudo station and goes to a yakitori shop in front of it. He is asked by a regular customer (Takahashi Yu) why he came to a place like this and Seino tries to pretend to be a serious young man who loves history, but … …
Cast: Muro Tsuyoshi, Hiraizumi Sei, Takahashi Yu

Kasumigaseki
Synopsis: Seino (Muro Tsuyoshi) stands rooted to the spot in front of Kasumigaseki station. It seemed as if it were the Kasumigaseki station where the National Diet Building is located but he is actually in Kawagoe City in Saitama Prefecture. Seino finds an old man (Beat Kiyoshi) tottering around with a cane near the roundabout at the station’s north exit. When he asks if there is any place with delicious food or famous local specialities, the old man’s response disappoints him. After that, Seino finds a dango shop with nice ambience, relaxes in a park where children are playing and starts to enjoy Kasumigaseki. However, he is shadowed by the old man’s “apparition” here and there. He collects himself and walks over to the southern side of the station where he finds his way to a coffee shop with a unique outer wall. Seino tries to ask for coffee but the proprietress (Takahashi Hitomi) strangely tells him for some reason that the crab porridge is delicious. Why would a coffee shop serve porridge? Seino continues to walk around this unfamiliar town but a man’s picture is displayed wherever he goes. Why is this man doing the same things as he is?
Cast: Muro Tsuyoshi, Beat Kiyoshi, Takahashi Hitomi

Yamada
Synopsis: As Seino (Muro Tsuyoshi) wishes to live quietly in the suburbs of western Tokyo in his old age, he gets off at Yamada station in Hachioji City to have a look. After eating a set meal of pork fried with ginger at a shop in front of the train station, he passes a mahjong parlour. He later encounters a beautiful young lady Misaki (Shinkawa Yua) at a rather distinctive temple called Unryuji. She had found the tamagotchi that Seino had gotten from the capsule toy vending machine at the shop where he had lunch. This puts Seino in a good mood. He thinks that he will be happy if he can spend his old age with such a person as he follows a path and arrives at a farm. He meets Misaki again and this time she is in work clothes. Misaki turns out to be the daughter of this farm’s owner. Her father (Ibuki Goro) makes him a wood-fired pizza for lunch. Misaki’s mother also appears and Seino is very pleased with the family’s hospitality but … …
Cast: Muro Tsuyoshi, Shinkawa Yua, Ibuki Goro

Kururi
Synopsis: Seino (Muro Tsuyoshi) reaches Kururi station in Kimitsu City in Chiba Prefecture as he hums a song by the band Quruli. He has finally come to a station where prepaid IC cards for transportation cannot be used. Seino learns that this is the only place in Chiba Prefecture among the country’s 100 famous sources of spring water. While walking through the shopping street, he discovers a retro-looking shop selling shaved ice. He is asked by the shop’s owner (Moto Fuyuki) what flavour he would like for his shaved ice and he orders one with a strange name. Seino is impressed by the the flavour of the shaved ice that he was served and praises the ice in Kururi for being different. However, he feels let down when the owner’s only response is “Oh, yes?” Seino pulls himself together and starts walking towards Kururi Castle. A staff member (Azuma Mikihisa) at the castle’s museum does his very best to explain its features. But Seino is more interested in looking for a place where he can have a meal. He finally finds the glow of a red lantern of Izakaya Kururi after dark. The silhouette of that mysterious man is there. In fact, that man’s picture is displayed everywhere he goes. Why is this man doing the same things as he is?
Cast: Muro Tsuyoshi, Moto Fuyuki, Azuma Mikihisa

Kururi (cont’d)
Synopsis: Wanting to have a drink, Seino (Muro Tsuyoshi) finally finds Izakaya Kururi in Kururi. The proprietress (Kubota Maki) and a regular customer (Nukumizu Yoichi) are having a good conversation but she sends Seino, who is not a regular, a questioning look. However, Seino does his best to chat with them and the atmosphere lightens up a little. At that moment, a guy approaches Izakaya Kururi on a bicycle. He is Nakata (Nakagawa Taishi) who seems to have taken preemptive action in the towns that Seino went to. When Nakata enters the joint, the proprietress and regular customer immediately hit it off with him. Feeling a sense of rivalry, Seino shares with Nakata his experiences and events that he enjoyed in the towns that he had covered so far. Not to be outdone, Nakata talks heatedly about how popular he is in each of those towns. They go back and forth trying to assert themselves until the proprietress gets exasperated. Then she suggests that they sing karaoke, which will lead to an unexpected development.
Cast: Muro Tsuyoshi, Nukumizu Yoichi, Kubota Maki, Nakagawa Taishi

This blog contains information and musings on current and upcoming Japanese dramas but is not intended to be comprehensive.
View all posts by jadefrost →
This entry was posted in Fuji TV, Spring 2021 Drama Specials and tagged Muro Tsuyoshi, Zenzzzen Shiranai Machi o Aruite Mita Mono no Series. Bookmark the permalink.