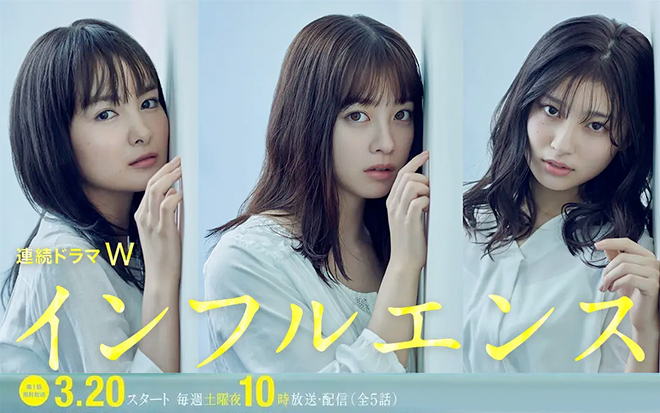 Story
Friendship becomes the trigger for the women who committed three murders. A woman identifying herself as Tozuka Yuri visits the novelist Oikawa Tomomi and tells her to make a story out of the three murders that she and her two friends committed. The first case happened at a Showa-era public housing complex 35 years ago, the second when they were high school students, and the third took place 10 years later when they were in their 20s. Tozuka Yuri is a shy high school student who lives in a public housing complex in the countryside. She feels guilty for being unable to protect her classmate Hino Satoko even though she knew about the sexual abuse by Satoko’s grandfather in the past, and they ended up drifting apart. One day, Sakazaki Maho transfers from Tokyo to the school that Yuri attends. Maho is serious about everything but this backfires on her and she feels out of place in class. However, Yuri immediately opens up to her about living in the same public housing complex and they quickly hit it off. Around that time, Maho is almost attacked by a thug with a knife. Yuri stabs the man in an attempt to save her. She escapes and falls asleep shivering with fear. However, the next day, the person who is arrested by the police is Satoko who has now become a delinquent.

Characters
Hashimoto Kanna as Tozuka Yuri
A high school student who loves reading books. She has lived in a public housing complex in the countryside from a young age and attends a local high school. She grew up to be gentle and well-mannered as her parents put interpersonal relationships with the people around them first. After graduating from university, she works at a book shop in Tokyo.

Aoi Wakana as Sakazaki Maho
Tozuka Yuri’s close friend. She transferred from a school in Tokyo after her parents got divorced. She hates to lose and feels out of place in class. But she gets along with Yuri who lives in the same housing complex, and they quickly become good friends.

Yoshikawa Ai as Hino Satoko
Tozuka Yuri’s childhood friend. She was sexually abused by her grandfather from a young age. After entering high school, she becomes friendly with Ogata Ayumu, who is part of a group of delinquents, and her life starts to get out of control.

Shirasu Jin as Natsume Toshiya
A detective with the First Investigation Division. He becomes acquainted with Tozuka Yuri after visiting the book shop where she works, and they grow attracted to each other.

Miyachika Kaito as Ogata Ayumu
A delinquent who attends the same high school as Tozuka Yuri, Sakazaki Maho and Hino Satoko and is one year their senior. He severely injures a classmate of Yuri’s and is sent to a juvenile correctional institute. He has been dating Satoko since high school days.

Otsuka Nene as as Tozuka Yuri
Identifying herself as Tozuka Yuri, she approaches the writer Oikawa Tomomi and says, “I want you to write a novel about the three murders that my friends and I committed.”

Suzuki Honami as Oikawa Tomomi
She initially has doubts about the startling story told by Tozuka Yuri. But she realises that she has these shared memories in her past and begins to independently investigate the truth of the cases.

This blog contains information and musings on current and upcoming Japanese dramas but is not intended to be comprehensive.
View all posts by jadefrost →
This entry was posted in Spring 2021 Dramas, WOWOW and tagged Hashimoto Kanna, Influence, Otsuka Nene, Suzuki Honami. Bookmark the permalink.