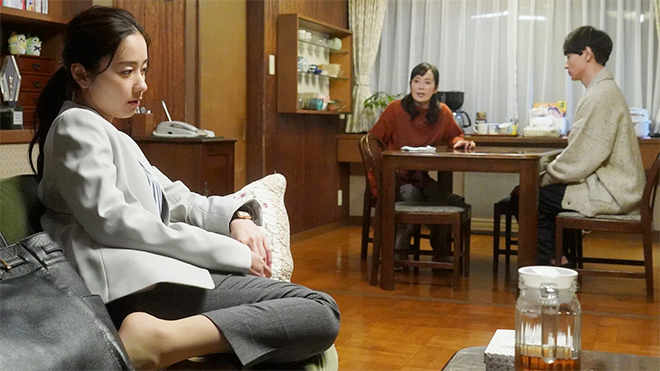 Date: From 12.55 – 1.55 a.m., 25 March 2021
Scriptwriter: Matoba Tomomi
Director: Seiya Akiko
Cast: Hotta Mayu, Hosoda Yoshihiko, Tamura Kentaro, Izuka Kenta, Matsumoto Wakana, Inoue Hajime, Miyata Sanae, Saito Takumi (guest star)
Synopsis: Ejima Tamaki (Hotta Mayu) is single and is an architect who works on site. She has decided to be a surrogate mother for her gay older brother Satoshi (Hosoda Yoshihiko). When she is more than four months pregnant, she tells their father Tadashi (Inoue Hajime) and mother Akiko (Miyata Sanae) that she is carrying Satoshi’s child. Their parents get upset and Tadashi punches Satoshi. That is the first time Satoshi confesses to being gay. Tamaki explains that sperm was taken from Satoshi’s partner Mizuno Keito (Izuka Kenta) while she is the donor of the egg, and a surrogate mother for their child. Their mother who has always doted on Satoshi since he was a child and shown an excessive aversion to Tamaki’s femininity, is unable to understand and her resistance grows stronger. The Ejima siblings frequent the maternity and gynaecology department where Satoshi’s ex-girlfriend Nishioka Mayu (Matsumoto Wakana) is a doctor. At first, Mayu was perplexed when she was told by Satoshi that his young sister is pregnant with his boyfriend’s child. But she has shown an understanding of their lifestyle and given them support. However, the section where the mother’s name should be in the maternity health handbook remains blank. Meanwhile, Satoshi considers Tamaki’s psychological burden when she has to hand over the child after birth and worries that his sister’s maternal instincts will awaken. Tamaki continues to work. Although she is at odds with the male-dominated culture centred around a senior colleague Kamiya Akira (Saito Takumi) and also feels frustrated, another colleague Noike Koshiro, who is her confidant, watches over her. Around the ninth month of her pregnancy, Tamaki collapses due to a possible premature delivery and is immediately hospitalised … …
Website: www.fujitv.co.jp/surrogacy
Twitter: twitter.com/fujitv

This blog contains information and musings on current and upcoming Japanese dramas but is not intended to be comprehensive.
View all posts by jadefrost →
This entry was posted in Fuji TV, Spring 2021 Drama Specials and tagged Surrogacy. Bookmark the permalink.