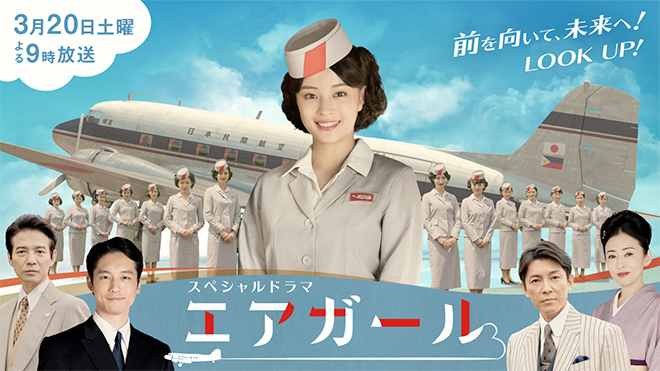 Date: From 9.00 p.m., 20 March 2021
Original Work: Nihon Koukuu Ikkisei by Nakamaru Yoshie
Scriptwriter: Hashimoto Hiroshi (Legal V, Shukatsu Kazoku, Otona Koukou)
Director: Fujita Meiji
Cast: Hirose Suzu, Sakaguchi Kentaro, Fujiki Naohito, Yamazaki Hirona, Fujino Ryoko, Nakata Kurumi, Ihara Rikka, Tanaka Tetsushi, Tsurumi Shingo, Matobu Sei, Hashizume Isao, Matsuyuki Yasuko, Yoshioka Hidetaka
Synopsis: Sano Komari (Hirose Suzu) was born to a couple who ran a small factory that produced airplane parts in a traditional working class neighbourhood of Tokyo in 1928. Fascinated with the sky due to her father’s influence, she dreams of becoming a pilot when she grows up. But her older brother who is part of the kamikaze corps dies in battle. Her parents also perish in the Great Tokyo Air Raid and she is left alone. Komari is taken in by her aunt Chiyo (Matsuyuki Yasuko) who runs a traditional Japanese restaurant, and allowed to complete high school. However, she spent her time helping out at the restaurant. One day, Komari hears an impassioned voice come from one of the restaurant’s rooms, “I want the Japanese people to take back Japan’s skies!” The person who said this is Matsuki Shizuo (Yoshioka Hidetaka), the head of the Ministry of Communications and Transportation’s Aviation Security Department. After the end of the war, Japan was barred from all aviation activities by the General Headquarters. In addition, Prime Minister Yoshida Shigeru’s aide Shirasu Jiro (Fujiki Naohito) believes that it would be better to leave the aviation business to a foreign company. However, Matsuki is firm in his belief that the aviation business should be started by Japanese no matter what difficulties lie in store. Moved by Matsuki’s words, Komari unintentionally listens in but she is censured by his young subordinate Mishima Yuki (Sakaguchi Kentaro) for eavesdropping. This would prove to be a fateful moment for the two of them. In 1951, Matsuki’s persistent negotiations with the General Headquarters pays off and Japan’s first airline after the war is finally set up. Komari hears from Mishima, who has already become an employee, that they are recruiting air girls and decides to apply. However, this turns out to be a very popular position and Komari has to take tests with an outrageous applicant-to-acceptance ratio. After that, Komari gets through several tight spots and somehow qualifies. However, barely a week after the company’s orientation ceremony, she has to go on a hurried test flight!?
Website: www.tv-asahi.co.jp/airgirl
Twitter: twitter.com/airgirl2021