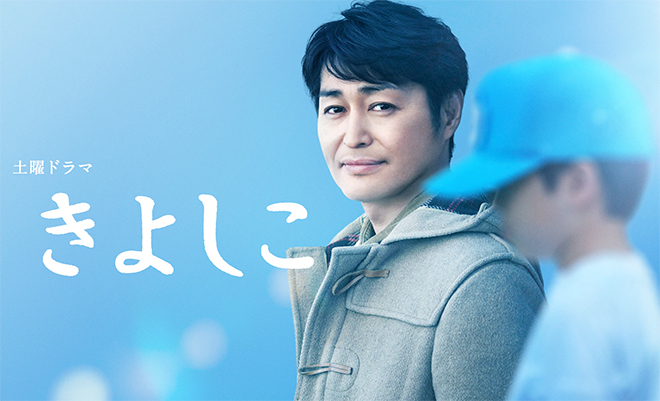 Date: From 9.00 – 10.13 p.m., 20 March 2021
Original Work: Kiyoshiko by Shigematsu Kiyoshi
Scriptwriter: Ito Nanoha
Director: Kariyama Shunsuke
Cast: Yasuda Ken, Nishida Naomi, Fukikoshi Mitsuru, Kikuchi Fuma, Torigoe Soma, Yokoyama Ayumu, Daruma, Wakabayashi Jiei, Oku Tomoya, Fukuchi Momoko, Chihara Seiji, Kanjiya Shihori, Mashima Hidekazu
Synopsis: The novelist Shiraishi Kiyoshi (Yasuda Ken) receives a letter from a mother who has a son with a stuttering problem. She asks Shiraishi in the letter if he would encourage her son to not be daunted by his stuttering. Shiraishi thinks about his own childhood and decides to talk to his editor Nomura (Fuma Kikuchi) about writing his personal story. Muroi (Fukikoshi Mitsuru), an editor who is Shiraishi’s senior, picks up on his intentions. Shiraishi has had a stuttering problem since his youth, particularly the “ka” and “ta” columns of syllables and even stumbled over his own name. He transferred schools a number of times due to his father Kenichi’s (Mashima Hidekazu) work and was laughed at by classmates each time he introduced himself. The strain of transferring schools got to him in the first grade of elementary school. Even when Shiraishi was asked by his mother Yoko (Kanjiya Shihori) what present he would like for Christmas, he could not pronounce the name of the game he wanted because it started with the letter “gi”. Unable to convey his feelings to friends and family in words, Shiraishi wished for friends who could talk about anything. He mistook the hymn Kiyoshi Kono Yoru, better known as Silent Night in English, as Kiyoshiko no Yoru and the imaginary Kiyoshiko was his ideal friend. However, in reality, his Christmas became a day of miserable memories. He eventually wrote about the frustrations that he suffered in Kiyoshiko. Besides the title Kiyoshiko, Shiraishi also wrote about his exchanges with the lonely Occhan (Chihara Seiji) in Donguri no Kokoro, and about his decision to leave both his family and the university student (Fukuchi Momoko) who liked him, for further studies in Tokyo and his departure for the metropolis in Tokyo. Even though he still stutters as an adult, he has a pleasant life with his wife Saori (Nishida Naomi).
Website: www.nhk.jp/p/ts/MK9M5ZRK7G
Twitter: twitter.com/nhk_dramas

This blog contains information and musings on current and upcoming Japanese dramas but is not intended to be comprehensive.
View all posts by jadefrost →
This entry was posted in NHK, Spring 2021 Drama Specials and tagged Fukikoshi Mitsuru, Kanjiya Shihori, Kiyoshiko, Nishida Naomi, Yasuda Ken. Bookmark the permalink.