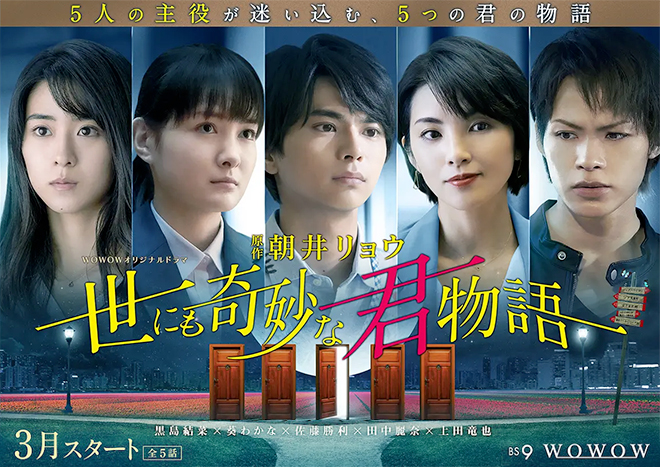 Story
Sharehow-sanai
In her quest for success as a freelance writer, Tagami Hiroko makes an attempt to do an undercover story on a sharehouse where a group of four male and female strangers live in order to delve into the reasons why independent working adults would live together when they have jobs, money and friends of their own. However, the real purpose for their communal life goes far beyond her imagination. What are they truly sharing?

Riajutsu Saiban
It is a world where a law to promote communication skills has been enacted. Young people over the age of 18 who have yet to be employed, are randomly selected as subjects to assess their communication ability. It is a formal qualification that they can even include in their resume if they pass. A plain university student Tanizawa Tomoko has been summoned to this trial. Vowing some revenge, she strives to study hard. On the day of the trial, Tomoko advocates “real communication” which cannot be evaluated by social media posts and “likes” to the adults as her classmates’ records are lined up. Who are the ones truly living a fulfilling real life?

Tate! Kinjiro
Kanayama Kojiro is a naive kindergarten teacher who struggles to create a kindergarten where the kids are lively. He is regarded favourably by the high society mother who is like the boss of the mothers and full of motivation because of his youth. As Sports Day draws near, a senior teacher hands Kojiro the annual event allocation schedule where the names of the kindergarteners and events are listed. These are guidelines to let every child “shine” twice in a year.

13.5 Moji shika Shuuchuushite Yomena
Honda Kaori is a go-getting news writer who writes for internet users. She works together with her husband who creates company newsletters in another organisation, and they have a young son. One day, her husband says he will be working overtime for a while. Suspecting that he is cheating on her, she opens his wallet and checks his receipts. The next day, Kaori is invited for a meal by a colleague who used to be her boyfriend and she feels a long-forgotten excitement.

Wakiyaku Battle Royale
Atsushi has passed his teens which was a time when he played leading characters in school dramas and movies. These leading roles have gradually reduced and he is now an actor whom people would recognise as they pass him but have difficulty remembering his name. There is a final audition for a famous director’s stage production. Six people of different ages, personalities and careers including Atsushi, take part in the audition. The strange thing is that none of them are the leading actor or actress material. Furthermore, the director is nowhere to be found. Atsushi discovers a video camera filming them on stage. By the time they realise it, a fierce battle has begun for the role of the main character …

This blog contains information and musings on current and upcoming Japanese dramas but is not intended to be comprehensive.
View all posts by jadefrost →
This entry was posted in Spring 2021 Dramas, WOWOW and tagged Aoi Wakana, Kuroshima Yuina, Tanaka Rena, Tsuruta Mayu, Yo ni mo Kimyouna Kimi Monogatari. Bookmark the permalink.