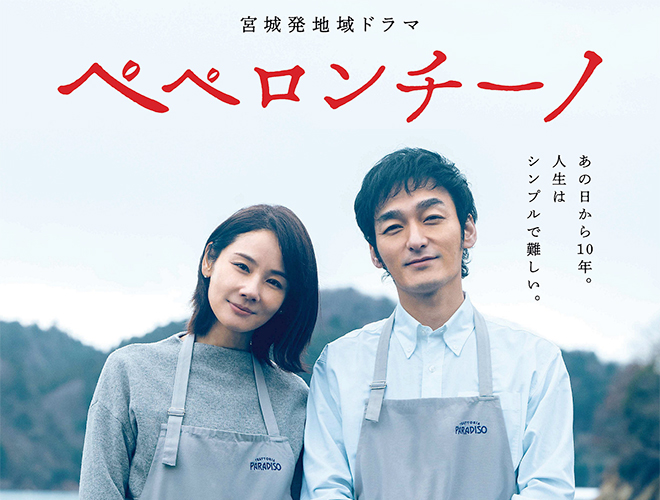 Date: From 10.30 p.m., 6 March 2021
Scriptwriter: Isshiki Nobuyuki (Haitatsusaretai Watashitachi, Kyuumei Byoto 24-ji Season 4, Otona no Natsu Yasumi)
Director: Maruyama Takuya
Cast: Kusanagi Tsuyoshi, Yoshida Yo, Yada Akiko, Tomita Miu, Isshiki Yohei, Saito Yua, Aonami Jun, Kunimura Jun
Synopsis: 10 years after the Great East Japan Earthquake, life has been simple and difficult. Onodera Kiyoshi (Kusanagi Tsuyoshi) and his wife Akari (Yoshida Yo) ran an Italian restaurant facing the sea in Oshika Peninsula, Miyagi Prefecture. However, it was swept away by the tsunami. Kiyoshi fell into despair and that drove him to drink heavily. He is now the owner and chef of a Italian new restaurant called Paradiso which he rebuilt and had become a chef who pursues the best flavours. He invites friends for a party that he has planned at his Italian restaurant on 11 March 2021, 10 years from the day of the earthquake. His friends are bewildered by this sudden invitation and begin to talk about his intentions. Who would venture to drink together on a day when the disaster area is shrouded in solemnity. As the party gets underway, Kiyoshi starts to tell them the reason for this gathering and each of the hidden stories in the years since the natural disaster occurred gradually come to light.
Website: www.nhk.or.jp/sendai/peperoncino
Twitter: twitter.com/nhk_dramas

This blog contains information and musings on current and upcoming Japanese dramas but is not intended to be comprehensive.
View all posts by jadefrost →
This entry was posted in NHK, Winter 2021 Drama Specials and tagged Kunimura Jun, Kusanagi Tsuyoshi, Peperoncino, Yoshida Yo. Bookmark the permalink.