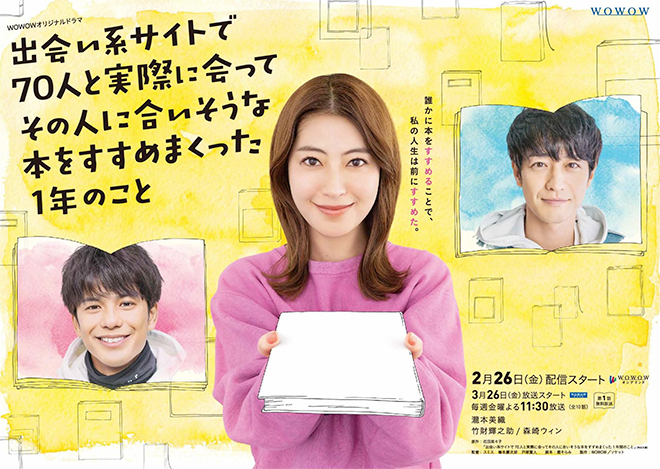 Story
33-year-old Hanada Nanako is the manager of a bookstore and loves books with a passion. She and her husband Ken, who was a former colleague, have been married for four years. However, their relationship has turned frosty and they are now on the verge of divorce. Nanako also faces difficulty at work. Paperback books are no longer as saleable as much as she would like them to be with the growing popularity of digital formats. It seems as if she is hurtling to rock bottom in life. One day, Nanako signs up with online dating site AU×AU and writes a note in her profile, “I’ll recommend the book that is right for you now.” After going through numerous dates, Nanako hits it off with a filmmaker with a cute smile called Endo. She starts seeing him regularly and gradually becomes conscious of him as he touches her heart. As Nanako encounters people that she would never have met and earnestly introduces books to each one of them, how will she look at herself and what kind of life will she decide to lead?

Characters
Takimoto Miori as Hanada Nanako
A store manager of Culcolle which is an unusual bookstore chain. She has hit rock bottom in both her marriage and work. Wanting to recommend books to people, she registers herself on an online dating site. She recommends books to people she does not know.

Takezai Terunosuke as Ken
Hanada Nanako’s husband who has decided to get a divorce. A former employee of Culcolle. At one time, he greatly loved making rice balls.

Morisaki Win as Endo
A man whom Hanada Nanako meets through the online dating site AUxAU. He runs a film-related company. His carefree cheerfulness has an impact on Nanako.

Maruyama Tomomi as Yoshida
Hanada Nanako’s senior colleague who works at the headquarters of Culcolle. He appreciates her passion for books.

This blog contains information and musings on current and upcoming Japanese dramas but is not intended to be comprehensive.
View all posts by jadefrost →
This entry was posted in Winter 2021 Dramas, WOWOW and tagged Deaikei Saito de 70-nin to Jissai ni Atte Sono Hito ni Aisouna Hon o Susume Makutta 1-nenkan no Koto, Takimoto Miori. Bookmark the permalink.