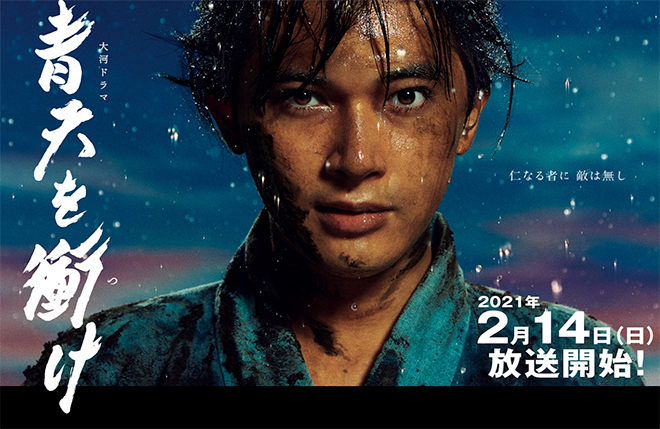 Story
Born in Chiaraijima Village in present day Fukaya City in Saitama Prefecture to a farming family which made indigo balls and cultivated silkworms, Shibusawa Eiichi, the man whose face will be on Japan’s new 10,000 yen bill, is known as the father of Japanese capitalism. He was involved in the founding of almost 500 companies, and at the same time some 600 social welfare organisations. Shibusawa lived in a time of turbulent change. He began as an advocate of anti-foreign sentiment, but recognising the momentum of history he came to embrace Western ideas. Born to a farming family in a rural area, Shibusawa became a vassal of the last shogun, Tokugawa Yoshinobu. But with the demise of the Tokugawa shogunate in 1868, he found himself unemployed. Shibusawa ended up serving the new Meiji government despite himself. After waging a great battle in the political arena, he eventually resigned at the age of 33 and became a civilian. As an industrialist, he kicked off towering reforms, founding what was needed and laying the foundation for modern Japan – banking, insurance, paper manufacturing, railway, shipping, gas and electricity. Guided by the teachings of Confucius, which he had learned since young, Shibusawa was able to rise above adversity no matter how the situation changed. In his later years, he focused his energy on serving public interest and was twice nominated for the Nobel Peace Prize.

Characters
Yoshizawa Ryo as Shibusawa Eiichi
The eldest son of the Shibusawa clan’s Nakanchi branch, or main branch of the family. He was more talkative and headstrong than anyone since childhood. Influenced by his cousin Odaka Junchu, he was absorbed in reading books every day. Through the teachings of his industrious father Ichirouemon, he learned a great deal about making indigo balls and unexpectedly displayed a flair for business.

Kora Kengo as Shibusawa Kisaku
The eldest son of the Shibusawa clan’s Shinyashiki branch. Two years older than Shibusawa Eiichi, they grew up as childhood friends and became lifetime partners. His impulsive yet compassionate nature is the complete opposite of the eloquent and intellectual Eiichi. He formed during the Shogitai, a band of former Tokugawa retainers opposed to the Meiji government, during the chaos of the Meiji Restoration, and took a divergent path from Eiichi.

Hashimoto Ai as Odaka Chiyo
Odaka Junchu and Choshichiro’s younger sister. She is a year younger than Shibusawa Eiichi and grew up together with Kisaku and him. She is reserved and talks little but is a woman with extraordinary fortitude. After marrying Eiichi, she protected the Shibusawas on behalf of her very busy husband.

Kobayashi Kaoru as Shibusawa Ichirouemon
Shibusawa Eiichi’s father. He married into the Shibusawa clan to revive the Nakanchi branch. An industrious man who was intent on studying the family trade, he was called an expert at making indigo balls. Although he is a rather stodgy and strict father, he was the most supportive of Eiichi’s exploits.

Wakui Emi as Shibusawa Ei
Shibusawa Eiichi’s loving mother. She is good-natured and compassionate, and taught a young Eiichi the spirit of putting everyone’s happiness first.

Kusanagi Tsuyoshi as Tokugawa Yoshinobu
The seventh son of Tokugawa Nariaki, he succeeded his father as the head of the Hitotsubashi branch and became the last Tokugawa shogun. He made the acquaintance of Shibusawa Eiichi because of his aide Hiraoka Enshiro’s good eye for talent, and gave Eiichi who had a major hand in financial reform, an important position. Even though the shogunate was about to come to an end, the rapport between the two men continued for the rest of their lives.

Takenaka Naoto as Tokugawa Nariaki
The ninth head of the Mito domain who was later known by his posthumous name, Rekko. A progressive and a man who gets things done, he had a volatile nature. Because of that, he had many enemies. The father of Shibusawa Eiichi’s lord Tokugawa Yoshinobu, he had expectations of his son from early childhood and showered him with affection that bordered on oppressive love.

Tsutsumi Shinichi as Hiraoka Enshiro
He was ashamed of his lack of ability as the son of a vassal of the shogun. But as fate would have it, he became Tokugawa Yoshinobu’s page. Yoshinobu had deep faith in him and he was promoted to be next in rank to Yoshinobu’s chief retainer. He saw potential in Shibusawa Eiichi who aspired to be an imperial loyalist who expels foreigners, and set Eiichi’s life in motion with a recommendation that he serve Yoshinobu.

Tamaki Hiroshi as Takashima Shuhan
A proponent of Western arms, he had learned Western artillery techniques from the Dutch. He was thrown into prison due to the conservative faction’s conspiracy and later moved to a prison in Okabe domain where Shibusawa Eiichi was born and grew up. His views were eventually sought by the Tokugawa shogunate after the arrival of Matthew Perry’s ships and he was pardoned.

Itabashi Shunya as Sanada Hannosuke
A master swordsman who honed his skills at Chiba Dojo which taught the Hokushin Itto style of swordplay. He travelled about to train in various places and developed friendships with Shibusawa Eiichi and others through bouts at the Odaka Dojo.

Sakou Yoshi as Tone Yoshiharu
The governor of the Okabe domain, he governed Chiaraijima Village where Shibusawa Eiichi lived. He would come to the Shibusawas of Nakanchi now and then to gorge on a feast with an arrogant attitude and demand large amounts of money and labourers from Eiichi’s grandfather and father. He eventually also comes into conflict with an adult Eiichi.

Yamazaki Ginnojo as Ohashi Totsuan
A Confucian scholar who opened a school called Shiseijuku. He advocated reverence of the Emperor and expulsion of foreigners which influenced many of his students. Shibusawa Eiichi’s older cousin Odaka Choshichiro was one of these students. An admirer of Ohashi’s ideology, he plotted to assassinate Ando Nobumasa who was a member of the shogun’s council of elders, at Ohashi’s instigation.