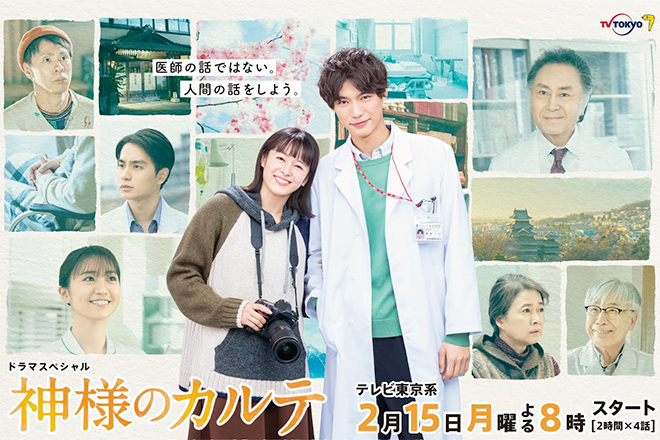 Story
Kurihara Ichito is a physician at Honjo Hospital, a 24-hour hospital in Matsumoto City, Nagano Prefecture that is open all year round. There is a constant shortage of doctors at this hospital. As it is commonplace for Ichito to provide consultation in areas that are not his specialty, there are times when he goes without sleep for three days. However, he has somehow managed to get through each day with the support of his wife Haru. Then Ichito gets an invitation from his alma mater’s medical department. If he goes back to the university, he will be able to get more rest and also spend more time with Haru. While Ichito is interested in learning about the most advanced medical treatment, he feels troubled. Is it right to be a doctor at a university hospital trying his best for patients that the hospital has given up on for being beyond help? As Ichito struggles with this dilemma, a cancer patient Azumi Kiyoko shows up and his interaction with her makes him reconsider what it means to be a good doctor. The answer that he finds as he struggles on the frontline is … …

Characters
Fukushi Sota as Kurihara Ichito
A physician who has worked at Honjo Hospital for five years. He loves and respects Natsume Soseki, speaks in an old-fashioned way and is called an eccentric by the people around him.

Seino Nana as Kurihara Haruna
Kurihara Ichito’s supportive wife whom he calls Haru. A mountain photographer who flies around the world. She actually has a complicated past.

Uesugi Shuhei as Sunayama Jiro
A surgeon at Honjo Hospital. He and Kurihara Ichito have been stuck with each other since their medical faculty days. He is called Monster.

Issey Ogata as Naito Kamoichi
The deputy head of Honjo Hospital’s Department of Internal Medicine. He is called Dr Old Fox. He always looks pale and exudes a dark aura but has outstanding skills with the endoscope.

Kitaoji Kinya as Itagaki Genzo
The head of Honjo Hospital’s Department of Gastroenterological Medicine. Kurihara Ichito’s teacher who is a fatherly figure to him. He possesses skills that has earned him the label “Shinshu’s hands of god” and has has firm convictions.

This blog contains information and musings on current and upcoming Japanese dramas but is not intended to be comprehensive.
View all posts by jadefrost →
This entry was posted in TV Tokyo, Winter 2021 Dramas and tagged Issey Ogata, Kamisama no Karute, Kitaoji Kinya. Bookmark the permalink.