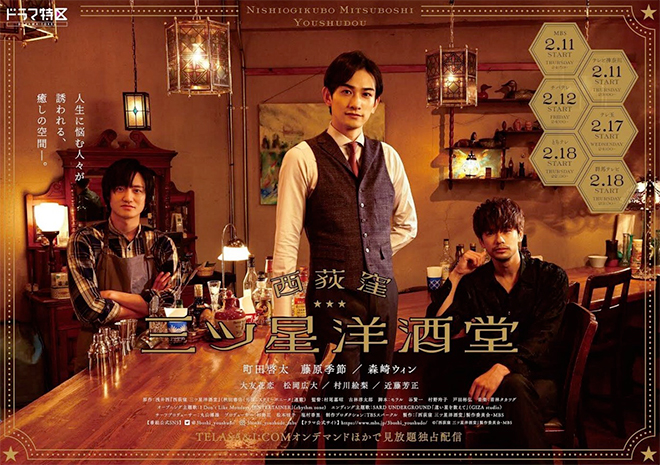 Story
Ranked the most desirable place to live in Tokyo, Nishi Ogikubo is a small town sandwiched in between the well-known Kichijoji and the large and commercial Ogikubo. There is a small bar called Mitsuboshi Youshudo that stands in a corner of Nishi Ogikubo. It is run by three men with completely different personalities – the handsome bartender Amamiya Ryoichiro, silent chef Nakauchi Satoru and the owner Kobayashi Naoki. They were former high school classmates, but at that time, they were not exactly on good terms with each other and unexpectedly met again at the bar as adults. Mitsuboshi Youshudo has a strange ability to draw people inside. Customers are cloaked in the atmosphere created by Kobayashi as they enjoy Amamiya’s cocktails and Nakauchi’s dishes made from canned food. They let out their worries and problems and by the time they realise it, they feel a little more positive about life. Amamiya, Nakauchi and Kobayashi seem to have something in their pasts, and their own troubles and struggles are also gradually revealed.

Characters
Machida Keita as Amamiya Ryoichiro
Mitsuboshi Youshudo’s bartender. He is well-off and lives a comfortable life. But he became a bartender after the previous owner of Mitsuboshi Youshudo passed away, and has been supporting the current owner Kobayashi Naoki. He understands peoples’ wants and feelings and is the type who will lend a hand to those in need.

Fujiwara Kisetsu as Nakauchi Satoru
Mitsuboshi Youshudo’s chef. He trained at a top restaurant and became a sous chef at a young age. However, he realised that he could no longer recognise flavours as he felt overworked and stressed due to his extremely strong sense of responsibility. While he was going through this rough patch, he was invited by Amamiya Ryoichiro and Kobayashi Naoki to be Mitsuboshi Youshudo’s chef. He has the spirit of a true artisan and great pride, and while he is stricter than other people, he is caring in one way or another.

Morisaki Win as Kobayashi Naoki
Mitsuboshi Youshudo’s owner. He aspired to be a novelist since he was a student and made a spectacular debut. But he fell into a slump and is no longer able to write now. He inherited Mitsuboshi Youshudo after his grandfather passed away and considers running the bar until he has used up the canned food that his grandfather had left to him.

Matsuoka Kodai as Takemoto Kazuma
A junior at a high-end restaurant that Nakauchi Satoru had worked at. He respects Nakauchi and wishes to work with him again.

This blog contains information and musings on current and upcoming Japanese dramas but is not intended to be comprehensive.
View all posts by jadefrost →
This entry was posted in Winter 2021 Dramas and tagged Nishi Ogikubo Mitsuboshi Youshudo. Bookmark the permalink.