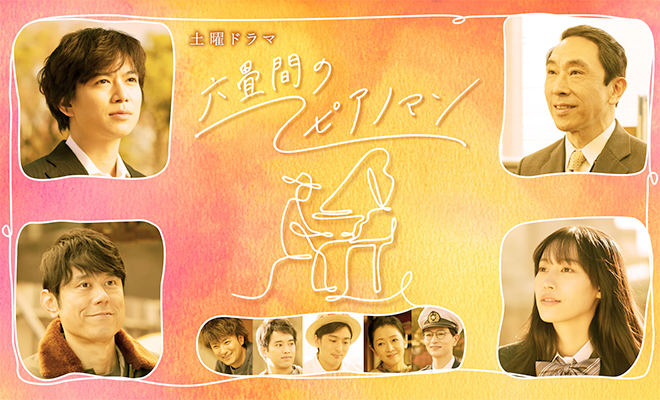 Story
The harassment of the newbie Nagatsu by superiors at the workplace where Murasawa Kenji is a temporary staff has become systemic. As Murasawa witnesses one of these episodes, he is reminded of Natsuno Makoto, who was called Piano Man, and feels tormented that he was not able to take any action back then. Eight years ago, Murasawa along with his colleagues Natsuno and Otomo Keisuke at another company were forced to do things against their will by their boss Kamikochi Hideto. Ever since Natsuno passed away in a traffic accident, Murasawa has avoided getting involved with other people. However, Murasawa is spurred by a video that Natsuno had joyfully sung as Six Tatami Piano Man while he was alive to take action for Nagatsu as well as for himself. This video of Billy Joel’s Piano Man was posted on a video sharing site before Natsuno lost his life. His singing voice continues to illuminate the hearts of the people around him eight years on. Eventually their lives intersect, and they help and encourage each other without realising it.

Characters
Kato Shigeaki as Murasawa Kenji
A temporary staff at a company for classified employment advertisements. He was a colleague of Natsuno Makoto eight years ago. Witnessing the harassment by a superior at his workplace right now, he wrestles with the fact that he was not able to help Natsuno who faced a similar situation back then.

Danta Yasunori as Natsuno Taizo
Natsuno Makoto’s father. He was the only one who raised him. On the day of his retirement eight years after Makoto’s death, he meets Kamikochi Hideto, the man who was his son’s superior and harasser, and grows agitated. He learns about the Six Tatami Piano Man video from some young people that he meets.

Harada Taizo as Kamikochi Hideto
Natsuno Makoto’s former boss. He set a punishing quota of work, which was compounded by forcing his subordinates to do things against their will. This became a problem and he was eventually forced to resign from the company. Eight years later, he makes the acquaintance of Murano Yoshie and others in completely different circumstances.

Minami Sara as Arimura Misaki
A high school student who is a fan of Natsuno Makoto’s video, Six Tatami Piano Man. She is an underground idol but has other music interests. She feels energised after watching the video whenever she feels down.

Furutachi Yutaro as Natsuno Makoto
He posted the video of himself singing Billy Joel’s Piano Man as Six Tatami Piano Man on a video sharing website. Although he passed away in an accident eight years ago, he left behind this video.

Kamiji Yusuke as Mizoguchi Shinji
The head of the part-timers at a pub eight years ago. He came to know about Natsuno Makoto’s Six Tatami Piano Man and that changed his view on life.

This blog contains information and musings on current and upcoming Japanese dramas but is not intended to be comprehensive.
View all posts by jadefrost →
This entry was posted in NHK, Winter 2021 Dramas and tagged Aso Yumi, Harada Taizo, Rokujoma no Piano Man. Bookmark the permalink.