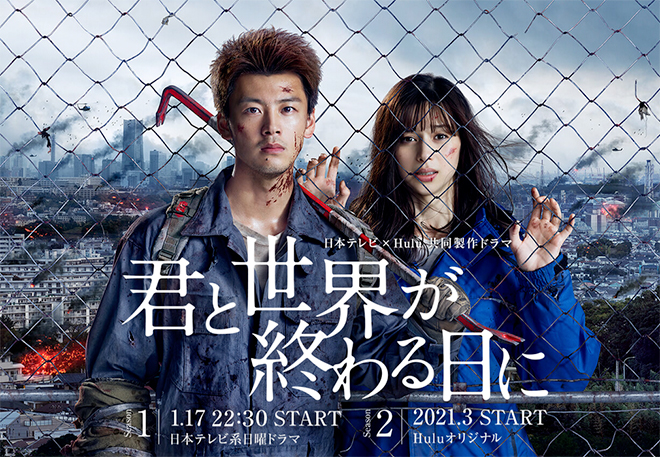 Story
One day, they were robbed of everything. Mamiya Hibiki is a car mechanic in Miura City located at the southern tip of Miura Peninsula. On the day that he intends to propose to his live-in girlfriend Ogasawara Kurumi, whom he has dated since high school, he heads to work like always when misfortune strikes. A tunnel caves in, trapping him for four days. When Mamiya eventually makes it out of the tunnel, he discovers that the world has completely changed. There is no one around. The transportation network is wrecked and communication signals are dead. A directive for an emergency evacuation is repeated on the radio. He sees traces of blood in the streets. It seems that the world has come to an end. Mamiya finally encounters someone only to find out that this person is a bloodthirsty zombie. He desperately searches for Kurumi but she is nowhere to be found. When he arrives at a nearby fire station in search of survivors, he is confronted with a gun by Todoroki Hiro, a former high school classmate turned police officer. Mamiya listens with disbelief as he is told that the town has been designated a hazardous zone to contain a mysterious infectious disease transmitted by bites from these zombies. A few survivors have sought refuge at the fire station including Todoroki and his superior Hongo Daiki; a university student Hiiragi Kanae; a mother and child Mihara Shoko and Yuzuki; a brawny bike delivery rider Azuma Shinji; and Korean part-time mover Yun Min Joon and his boss Komoto Yohei. They are gripped with fear as the number of zombies grow. Are they a bunch who can pull through this hopeless situation together with Mamiya? And will he be able to overcome one crisis after another and see his beloved Kurumi again?

Characters
Takeuchi Ryoma as Mamiya Hibiki
A car mechanic who lives with Ogasawara Kurumi whom he has been dating since high school. He belonged to the archery club during high school days. A person with great perseverance, he hates giving up. These traits help him to survive a world where the living dead roam.

Nakajo Ayami as Ogasawara Kurumi
Mamiya Hibiki’s high school sweetheart. She graduated from a well-known university’s medical faculty with honours, and works as a houseman. She is hard on herself and a capable person but acts her age in front of Hibiki. She belonged to the same archery club as he did back in high school. After the world is overtaken by the living dead, she disappears.

Kasamatsu Sho as Todoroki Hiro
A police officer who is one of the survivors and a former high school classmate of Mamiya Hibiki and Ogasawara Kurumi. He is a sergeant with the mobile investigation unit. A realist who believes hard-headed decisions are occasionally needed to achieve goals. There were some ill feelings between him and Mamiya in the past.

Iitoyo Marie as Hiiragi Kanae
A third-year student who attends a nearby university. She is one of the survivors. There is something cold about her and she keeps people at a distance. She gradually opens up to Mamiya Hibiki after having a brush with death.

Otani Ryohei as Hongo Daiki
A police officer who is one of the survivors. He is an assistant inspector with the mobile investigation unit and Todoroki Hiro’s superior. He tries to fulfil his duty to keep people safe as a police officer even during this dire situation.

Makita Sports as Komoto Yohei
A mover who is one of the survivors. He manages part-time movers as a mid-level executive. He is the type whose philosophy is “If you can’t beat them, join them”. He is self-deprecating to those above him and harsh to those below him.

Ando Tamae as Mihara Shoko
A caregiver who is one of the survivors along with her daughter Yuzuki. She will do anything in order to protect her daughter. She is a healer who takes the initiative to treat and look after people.

Takito Kenichi as Shuto Koki
A researcher who is one of the survivors. He tries hard to save as many people as possible who have been caught in this world of living dead. He gives the survivors emotional support.

This blog contains information and musings on current and upcoming Japanese dramas but is not intended to be comprehensive.
View all posts by jadefrost →
This entry was posted in NTV, Winter 2021 Dramas and tagged Kimi to Sekai ga Owaru Hi ni Series, Makita Sports, Takito Kenichi. Bookmark the permalink.