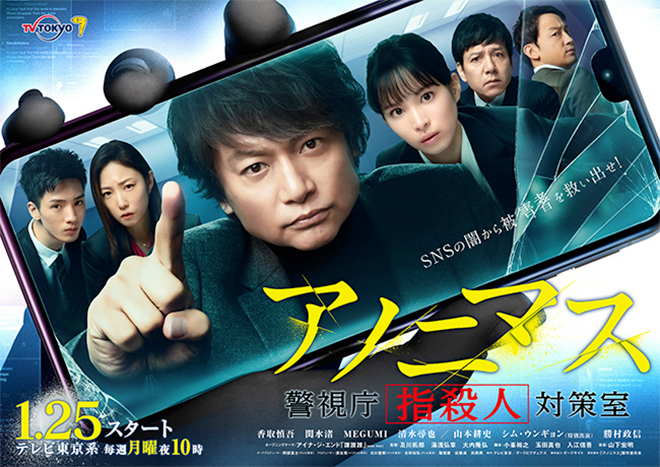 Story
The rate of internet user anonymity in Japan is a significant 70% in comparison to other countries. are rife in society and “keyboard murders” have become a social problem. In response to pressure from the public, the Tokyo Metropolitan Police Department creates a special unit known as Yubitai on a trial basis. Led by Koshigaya Shinjiro, Yubitai analyses social media information that will aid investigations and gives a helping hand to the public with the aim of rooting out defamation and abuse. Despite this lofty ideal, the creation of this unit is actually mere posturing. The members that have been assembled for the team are all officers with idiosyncrasies who have been sidelined, including detective Banjo Wataru. Banjo is a loner who was dropped from the First Investigation Division as a result of some case. The unit figures out who the anonymous criminals are which guides them in solving cases of cyber bullying. One day, a middle-aged couple Sanada Mitsuhiro and Maiko visit Yubitai. Their daughter Kozue was a fashion model who lived alone and committed suicide a few days ago. The police quickly closed the case as it was not criminal in nature. After learning that Kozue was the target of serious defamation on the internet, the Sanadas tearfully ask Yubitai to arrest the trolls whose heartless words drove their daughter to take her own life.

Characters
Katori Shingo as Banjo Wataru
A detective who has been assigned to the Tokyo Metropolitan Police Department’s special unit known as Yubitai. He used to belong to the First Investigation Division and displayed keen insight but he was dropped due to some case and transferred to Yubitai. He is a loner and a man of few words.

Sekimizu Nagisa as Usui Sakura
Banjo Wataru’s partner. She is very proactive in investigations and is prone to empathising with the people asking for advice.

Megumi as Suganuma Ririko
A detective who belongs to Yubitai. She is a strong-minded woman who is good at pinpointing things.

Katsumura Masanobu as Koshigaya Shinjiro
The head of Yubitai. He is a mild-mannered person who tends to get stuck between Banjo Wataru and the members of the unit.

Shim Eun-kyung as Kuraki Sena
A former detective with the First Investigation Division and Banjo Wataru’s ex-partner. She got embroiled in an important case.

Yamamoto Koji as Hatori Kenzo
A detective with the First Investigation Division. Banjo Wataru’s ex-colleague who lashes out at him.

This blog contains information and musings on current and upcoming Japanese dramas but is not intended to be comprehensive.
View all posts by jadefrost →
This entry was posted in TV Tokyo, Winter 2021 Dramas and tagged Anonymous, Katori Shingo, Katsumura Masanobu, Yamamoto Koji. Bookmark the permalink.