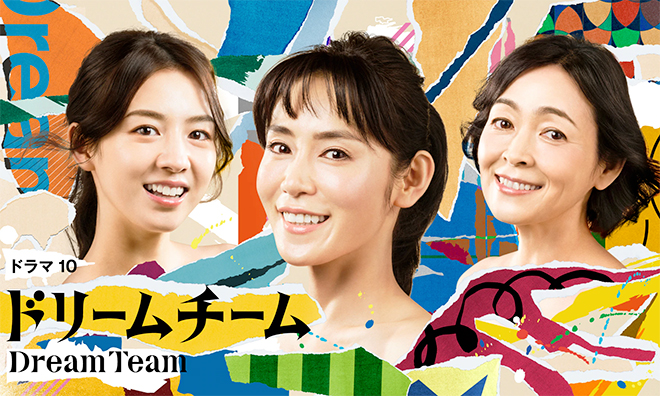 Story
The former female members of a high school basketball club have gathered for a party in memory of their basketball coach Ando Katsuhito. 39-year-old Enoki Kana, 53-year-old Tsuruga Yuko and 27-year-old Mishiro Akane are noticeably unhappy. Each of them has just suffered an unforeseen incident, prompting them to say with a touch of self-derision that their prime was during high school. Kana’s image as the “perfect stay-at-home wife” has shattered with the exposé on her husband’s affair. Yuko has not only suddenly fallen from the fast track at her company due to allegations of sexual and power harassment, but also discovered that her boyfriend is cheating on her. Akane has been acting as a girl who has it all on social media but become the target of a huge backlash. While the three women belong to different generations and have different personalities, the one thing that they have in common is that they are former captains of the same basketball club. One remark from Ando’s wife Yoshie abruptly changes things. “How about staying in the team’s dorm?” And so the three women begin living under the same roof. With the addition of Ando’s son Yuichi and Kana’s young daughter Tamaki, they become a pseudo family of six. Although they have hit rock bottom, Ando’s words to “attack until the very end” motivate them. As Kana, Yuko and Akane strive to change, will they be able to overcome adversity and turn their lives around?

Characters
Yamaguchi Sayaka as Enoki Kana
She lives with her beloved daughter Tamaki and husband Keigo who is a university professor and also a TV commentator. Although she is the envy of her friends, she has actually been hiding a life oppressed by her husband’s psychological harassment. One day, Keigo is exposed for sexually harassing and discriminatin female university students in a weekly magazine. Her entire life comes to naught even though she had tried her best to keep up appearances. She runs away from home to stay at the dorm of the girls’ basketball club that she belonged to back in high school as she sets out to make a fresh start in life.

Zaizen Naomi as Tsuruga Yuko
A career woman who believes in working hard. She is in a managerial position at a major advertising agency and has a younger boyfriend. One day, she is accused of sexual and power harassment and gets demoted. On top of that, she discovers her boyfriend’s infidelity. Her skills at work seem inversely related to her ability at romance.

Sakuraba Nanami as Mishiro Akane
In contrast to her plain everyday life, she acts as a girl who has it all on social media and delights in getting “likes”. However, she faces a huge backlash online due to some reason. Even so, she feels out of place in real life. Her favourite words are “no way”, “no”.

Ibu Masato as Ando Katsuhito
The former coach of Mihama Girls High’s basketball club. Although his coaching methods seem to have different for each generation, his stance was consistent, “Basketball is a sport that you’ll lost if you don’t go on the offense. Don’t worm out of a match.” At that time, he neglected his family and spent all his time coaching children.

Yo Kimiko as Ando Yoshie
Ando Katsuhito’s wife. She had long given up on her husband who devoted his time to the basketball club but she holds the memorial with the intention of living the remainder of her life as a woman. When Enoki Kana comes to see her, she invites Kana live at the dorm for the sake of her son Yuichi who has never brought a girlfriend back not to mention showed any hint of marriage, without knowing that Kana has a child.

Mikata Ryosuke as Ando Yuichi
Ando Katsuhito’s son. He is a system engineer. He is not good at talking to women, because he knows the strong-minded women at the basketball club’s dorm. He resents his father who spent all his time coaching the basketball club but neglected the family.

Maekawa Yasuyuki as Yuki Keigo
Enoki Kana’s husband. A professor of international relations at some famous university who is also known to the public as a commentator on TV.

Murakami Shingo as Shono Sosuke
The CEO of an IT start-up. He shows up just as Enoki Kana is struggling to stand on her own and says something which will influence her in the future.

This blog contains information and musings on current and upcoming Japanese dramas but is not intended to be comprehensive.
View all posts by jadefrost →
This entry was posted in NHK, Winter 2021 Dramas and tagged Dream Team, Ibu Masato, Sakuraba Nanami, Yamaguchi Sayaka, Yo Kimiko. Bookmark the permalink.