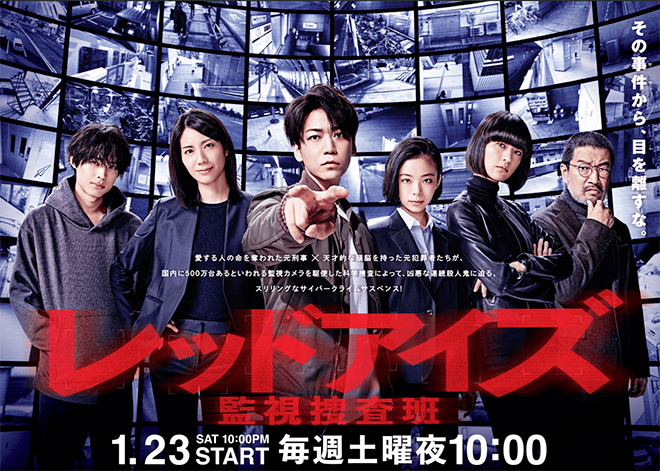 Story
Fushimi Kyosuke is a former detective of the Kanagawa Prefectural Police’s First Investigation Division. He quit after his fiancee Yuki Miho was murdered by a serial killer and opened a private investigation agency that specialises in investigating infidelity. It has been three years since Fushimi left the police force. The Kanagawa Prefectural Police has set up an investigation support analysis centre, known as KSBC for short. It is a unit which tackles criminal investigations by analysing big data collated real-time such as footage from some 5 million surveillance and security cameras nationwide. Fushimi’s ex-boss Shimabara Yuri at the First Investigation Division has been put in charge of KSBC. She offers him a role as a special investigator to conduct investigations based on the results of the analyses. He sets out his terms that she must agree to accept his investigation team as KSBC investigators. However, the people he brings over are all former criminals with dark pasts – Minatogawa Yumiko, an ex-Self Defence Forces officer who murdered her husband; Yamazaki Tatsujiro, a former university professor in criminal psychology who was arrested for fraud; and Komaki Kaname, a young genius hacker. While KSBC data analyst Nagashi Fumika and others are perplexed that they have been allowed to join, a woman is attacked at the carpark of a park and taken away by a man. Fushimi and these former criminals use their skills to track down the culprit.

Characters
Kamenashi Kazuya as Fushimi Kyosuke
A former detective of the Kanagawa Prefectural Police’s First Investigation Division who is now a KSBC special investigator. Three years ago, his fiancee was murdered by someone and he quit the police force. After that, he opened a private investigation agency together with Yamazaki Tatsujiro, Minatogawa Yumiko and Komaki Kaname specialising in investigating infidelity. At that time, he received an offer from Shimabara Yuri, who was his superior during his time at the First Investigation Division, to be a special investigator at the newly established KSBC. He has a cool personality and exceptional perceptiveness and energy. But he is not able to control his emotions when it comes to matters connected to his late fiancee’s case. While investigating cases, he frequently throws the people around him off by acting independently on his own hunches … …

Matsumura Hokuto as Komaki Kaname
A KSBC special investigator. He is a talented hacker who is skilled at handling IT equipment and plays a central role in investigative analysis at the centre. After graduating at the top of his class from a famous university of technology, he joined a large IT company. While he was an employee, he secretly hacked into all the security firms and banks. He was discovered by the police the fifth time he hacked into the Ministry of Defence’s servers and was arrested. While he has a quick mind and is good at analysing data, he has a tendency to behave arrogantly but means no offence. Although he seems to carry out his work at KSBC with indifference, there is an undercurrent of righteousness.

Shishido Kavka as Minatogawa Yumiko
A KSBC special investigator. She is an ex-Self Defence Forces officer and has great physical strength. A single mother who has a deep love for her only son. After graduating from high school, she joined the Self Defence Forces. That is where she met her husband and they got married. However, he gradually started battering her and she was forced to kill him in order to protect their son. At that time, Fushimi Kyosuke was the one who arrested her. She is always composed and does not say a lot but she is sensitive to and considerate of the feelings of victims.

Shuri as Nagashi Fumika
An outstanding KSBC data analyst. She used to belong to the Cyber Crime Division but applied to move to KSBC. She is proud of the KSBC’s investigation methods which uses state-of-the-art technology and big data. She and the “former criminals” are often divided over the direction of the investigation. She is serious and assiduous but also a little stubborn because she hates to lose.

Kimura Yuichi as Yamazaki Tatsujiro
A KSBC special investigator. He is a former criminal psychologist who used to be a professor at a national university. An excellent profiler who remembers various criminal data and accurately anticipates the behaviour of criminals. When he was a university professor, he got involved in a criminal group’s scams for some reason. In an investment scam that he had decided would be his last with the group, he was betrayed by one of its members and was later arrested. He is usually aloof and gives off an air of evasiveness. His interest is shogi.

Matsushita Nao as Shimabara Yuri
The head of the newly established KSBC at the Kanagawa Prefectural Police. She makes decisions on the course of an investigation based on information gathered by KSBC. She is the officer in charge of determining the movements of the team on the ground and is overall in charge of the centre. Three years ago, she and Fushimi Kyosuke served in the First Investigation Division, and she has had a high regard for his perceptiveness and energy. She is the person who brought him on board KSBC as a special investigator. She has a strong sense of justice and responsibility towards her work. She is married with two children. While she is estranged from her parents, she is on good terms with her much younger sister.

This blog contains information and musings on current and upcoming Japanese dramas but is not intended to be comprehensive.
View all posts by jadefrost →
This entry was posted in NTV, Winter 2021 Dramas and tagged Kamenashi Kazuya, Matsushita Nao, Red Eyes. Bookmark the permalink.