Ore no Ie no Hanashi 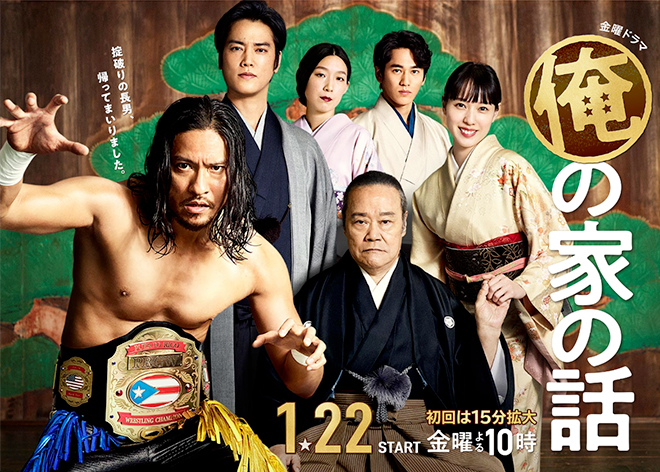 Story
Professional wrestler Miyama Juichi, who goes by the ring name Blizzard Ju, thinks about his family even as he is slammed against the mat and thrown out of the rope in a match. As a child, Juichi never got yelled at by his father Jusaburo, an acclaimed Noh actor and “Living National Treasure”. Even when he created mischief with his father’s disciple Jugemu, Jugemu was the only one that Jusaburo scolded. However, Jusaburo never praised Juichi, who was hailed a child prodigy from the time he made his debut in Noh. This hurt the young boy, aggravating his rebellious phase. Although Juichi was expected to follow in Jusaburo’s footsteps, he left home after his mother’s death and went into professional wrestling which had the form of a family that he yearned for. He joined a large professional wrestling group and eventually became the Puerto Rico Champion. Now with the passage of time, Juichi is past his prime and scrapes by with a small group due to his injuries and age. One day, he receives a phone call informing him that his father is in a critical condition. Juichi rushes to the hospital where he meets his two younger siblings Yosuke and Mai for the first time in ages. He is told that Jusaburo suffered a stroke the year before and made his farewell two years ago. Juichi gets indignant when they start to talk about the inheritance and succession. He thus decides to retire from pro wrestling and take over as the 28th generation head of the Miyama family. What awaits Juichi when he finishes his last match, is the news of Jusaburo’s discharge from hospital. In front of his family, Jusaburo brings up his intention to marry his helper Shida Sakura at the daycare service and leave all his money to her, setting the stage for a showdown between Juichi’s family and his father’s mysterious helper.

Characters
Nagase Tomoya as Miyama Juichi
A professional wrestler with the ring name, Blizzard Ju. The eldest son of the Miyama family of Noh performers. He made his debut at the age of 4 and was hailed as a child prodigy. But he rebelled, left home at the age of 17 and knocked on the door of a major professional wrestling organisation. He became a popular wrestler and got married. Although he travelled about to perfect his skills and became the Puerto Rico Champion, he sustained serious injuries while defending his title. Then his wife broached divorce. He now belongs to a new group called Santama Pro Wrestling. After he learns about his father Jusaburo’s collapse, he returns home for the first time in 25 years. This leads to his decision to retire from professional wrestling and succeed his father.

Toda Erika as Shida Sakura
Miyama Jusaburo’s mysterious helper who is a staff of Atsumare Yasuragi no Mori. She met Jusaburo at a daycare facility and readily consents to his marriage proposal. Although she devotedly cares for him, his family is skeptical about her motives after Jusaburo introduces her as his fiancee and announces his intention to leave his fortune to her.

Nagayama Kento as Miyama Yosuke
The second son of the Miyama family. Learning from the example set by his wild older brother Juichi, he decided to lead a steady life and became a lawyer. He likes Noh and continues to practice it even now but he realises that he does not have the talent for it. He completely distrusts Shida Sakura who is engaged to his father.

Eguchi Noriko as Osadai Mai
The only daughter of the Miyama family and younger sister of Miyama Juichi. She is a teacher at a cram school. She feels a sense of inferiority to her brothers as she cannot take over from their father simply because she is female. She continues to practice Noh even now and secretly wishes that her 17-year-old son Daisu can become the head of the family.

Hiraiwa Kami as Yuka
Miyama Juichi’s ex-wife and mother of his 10-year-old son Hideo. She was originally a huge fan of Blizzard Ju before she got married to Juichi. However, she did not hear a word from him for two and a half years when he left to train in the US and divorced him after running out of patience.

Kiritani Kenta as Miyama Jugemu
He was raised as Miyama Jusaburo’s disciple from the time he was in the first grade of elementary school and was Juichi’s playmate as a child. He became Jusaburo’s adopted son and is supposed to take over from him but he believes Juichi should be the one to continue the Miyama school of Noh. He has been supporting the Miyama school and is integral to it.

Nishida Toshiyuki as Miyama Jusaburo
The 27th generation head of the Miyama family. A practitioner of Noh which is an important intangible cultural asset. He is a living national treasure with over 10,000 disciples across the country, and also the chairman of the national Noh association. Two years ago, he suffered a stroke which left him paralysed in the lower half of his body. As a result, he rejected all public performances. After that, he collapsed and was in a critical condition but miraculously recovered and declared his marriage to Shida Sakura.

This blog contains information and musings on current and upcoming Japanese dramas but is not intended to be comprehensive.
View all posts by jadefrost →
This entry was posted in TBS/MBS, Winter 2021 Dramas and tagged Eguchi Noriko, Nagase Tomoya, Nagayama Kento, Nishida Toshiyuki, Ore no Ie no Hanashi, Toda Erika. Bookmark the permalink.