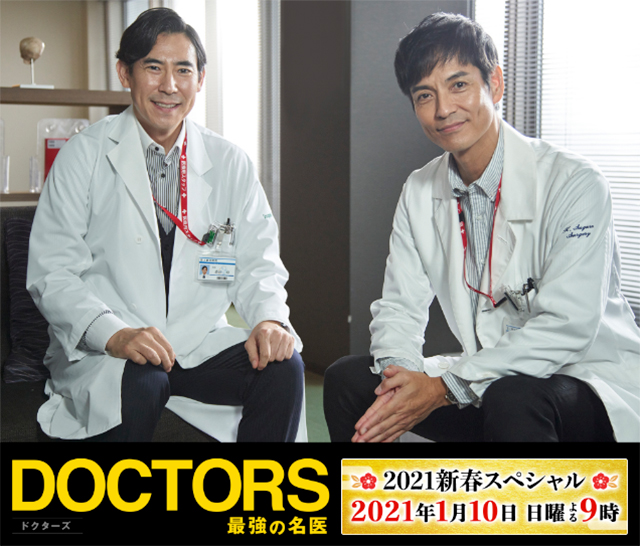 Date: From 9.00 p.m., 10 January 2021
Scriptwriter: Fukuda Yasushi (Keiji to Kenji, Good Partner, Doctors Series)
Director: Motohashi Keita
Cast: Sawamura Ikki, Takashima Masanobu, Higa Manami, Kurokawa Tomoka, Mayaji Masako, Masana Bokuzo, Takizawa Saori, Asari Yosuke, Atsushi, Saito Yoichiro, Ozaki Uso, Anami Atsuko, Ishida Hikari, Hashimoto Jun, Nomaguchi Toru, Yoshida Kotaro, Ono Takehiko, Matsuzaka Keiko, Ito Ran, Nogiwa Yoko
Synopsis: It is the 100th anniversary of the founding of Dogami General Hospital next year and its hospital director Moriyama Suguru (Takashima Masanobu) is in discussion with advertising companies about a commemoration ceremony. He invites the governor of Tokyo and even popular artists with the intention of making it a grand celebration. As expected, Hanamura Reiko (Ishida Hikari), the manager of Tokyo Yotsuba Bank’s Loans Division, flatly refuses a loan worth 14 million yen for the event. In fact, two years ago Moriyama had brushed aside objections from the people around him and attempted to dig a hot spring. But there was no hot spring in the end. As a result of the huge loss incurred, Dogami General Hospital has been in the red for two consecutive quarters. Moriyama is told by Reiko that fundamental reforms are necessary and he decides to undertake management reforms. Both Sagara Kosuke (Sawamura Ikki) and Minagawa Kazue (Ito Ran) have a feeling that Moriyama’s misguided “reforms” will cause trouble. At this moment, Reiko is rushed to Dogami General Hospital after falling down the stairs and fracturing her right fibula. She is hospitalised for the time being but complains about back pain. Sagara feels that something is not quite right and runs a test. The results show that she has a tumour in her pancreas. Moriyama thinks that if they can save Reiko, he will be given preferential treatment for the loan out of gratitude. However, Reiko is shaken by the gravity of her situation and wants to transfer hospitals to seek a second opinion. Meanwhile, Mitazawa Kazuhisa (Yoshida Kotaro), a branch manager at Tokyo Yotsuba Bank, questions Reiko’s sudden application to extend her absence from work. Hiraga Yoji (Hashimoto Jun), a section head in the Loans Division who cannot stand Reiko, approaches Moriyama. He hints at the possibility that the decision making authority will be transferred to him and gets Moriyama to divulge the name of Reiko’s illness. Reiko’s diagnosis does not change no matter which hospital she goes to. She feels depressed to be ordered by Mitazawa, who has heard about her medical condition from Hiraga, to focus on medical treatment and not worry about work. Sagara reaches out to Reiko and reports to Moriyama that the hospital will take her in. But Moriyama is suddenly vehemently opposed to it. Suspecting that he has changed his mind because of something loan-related, Sagara … …
Website: www.tv-asahi.co.jp/doctors

This blog contains information and musings on current and upcoming Japanese dramas but is not intended to be comprehensive.
View all posts by jadefrost →
This entry was posted in TV Asahi, Winter 2021 Drama Specials and tagged Doctors ~ Saikyou no Meii Series, Sawamura Ikki, Takashima Masanobu, Yoshida Kotaro. Bookmark the permalink.